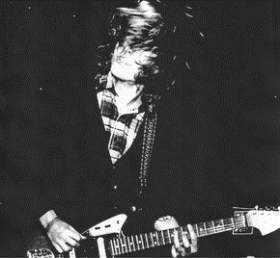 The only thing that could possibly hold together a collection of obsessively recorded singles from various EPs and collaborative projects released over a three-year period would be an almost superhuman style – a sound with such personality and power that it overcomes all else. Fortunately, Ty Segall is one stylish mutherfucker.
At only 23 years old, San Francisco’s Segall has been a member of five-plus bands, released five full-length solo albums, at least nine solo singles and EPs, and participated in collaborative EPs with similarly distorted artists like Thee Oh Sees, Mikal Cronin, and JEFF the Brotherhood. All of this has been accomplished in a ridiculously short period of time. After all, Segall only started his solo career in 2008. His breakthrough hit from that year, “The Drag,” appears in a rough – or should I say, even rougher – cut on the new Singles record.
Yet while Ty has been a fixture on the scene for some time, his latest full-length record, Goodbye Bread, has been bringing him more widespread notoriety than ever before. Laced with more lyricism and acoustic strumming than any of Segall’s other releases, Goodbye Bread clearly departed from Ty’s earlier material, though traces of the fuzz rocker’s lead foot on the distortion pedal and grunge-y growling remained.
Hitting shelves just in time to bank on Segall’s recent surge in success, Singles 2007-2010 seems custom-designed to remind old fans that Segall’s former sound isn’t dead and gone, while introducing newbs to his grittier work. The double album, out now on Goner Records, spans Segall’s three years as a solo artist, including a number of tracks from out-of-print early EPs and a few never-released demos. Collected together, the record is still surprisingly cohesive, thanks in large part to Segall’s signature style.
Formed in fuzz fury, Segall’s songs ache with an awesome sense of humor, repetitive phrases that seem bent on scratching some unseen itch, and a muddiness that may appear chaotic but is always controlled. Segall navigates his way through the dirt and grime like a steadfast worker in a glass ant farm, and he’s just as fun to watch. With hints of his acoustic prowess on the “Lovely One” demo, a touch of tongue-in-cheek Brit-punk parody on “Happy Creeps” and a bit of rockabilly on the “So Alone” demo, Singles still offers interesting variety within its determined style. But Segall combines all these small influences with the hazed-out feeling of a hot afternoon and a heavy dose of fuzz-fueled confidence, making each track his and only his.
Singles 2007-2010 captures everything there is to love about Ty Segall. For both Segall beginners and earlier enthusiasts, Singles 2007-2010 is a must-have. Though some of the songs on this collection are four years old, they all sound fresh as could be. Pumped-up and conveniently collected, Singles 2007-2010 is bound to round out your Ty Segall catalog, or build a really strong foundation for its inception.
PrevPreviousCarrion Crawler/ The Dream – Thee Oh Sees
NextSo Many Things – Eddy Current Suppression RingNext