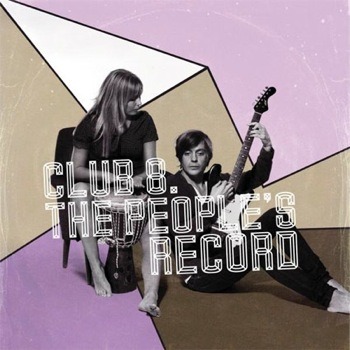 How wonderful it is for a band that is already really good to get even better.

Club 8 is a Swedish duo consisting of Karolina Komstedt and Johan Angergård, who’ve been releasing albums since 1995. Their music typically blends the whimsy of Swedish pop, the intimacy of twee, the sweetness of bubblegum, the personal lyricism that could give Stuart Murdoch and Morrissey a run for their money, and the strong hooks to match.

Despite the quality and consistency, they’ve seemed to allude grabbing any significant attention from the States. Maybe that’s because they refused touring and interviews. Their seventh full-length release, The People’s Record, takes their sound and songwriting a step further with an emphasis on percussion. This album is by far their most danceable, utilizing syncopation and driving beats that suggest influences from Latin and African music.

It is no coincidence that this is their first record Johan didn’t produce. Enlisting the help of Jari Haapalainen in the control room, they sought inspiration with a trip to Brazil and built up a record collection of 1970s Western African classics. To flesh out their new direction, the teamed up with percussionist, Jouni Haapala, a fellow Nordic musician whose spent time learning the heart of the beats on a spell in Cuba.

To balance all these cheerful aesthetics, Club 8’s lyrical tendencies still veer down the paths of dour and forlorn. With titles like, “Dancing with the Mentally Ill,” “My Pessimistic Heart,” “Be Mad, Get Ill, Be Still,” and “We’re All Going to Die,” Club 8 may be taking their tunes to the discothèques, but they haven’t checked their problems at the door. They are in fact celebrating these dark feelings, which very well may be the mark of maturity that has guided their artistic progression so effectively.