Toward The Low Sun – Dirty Three 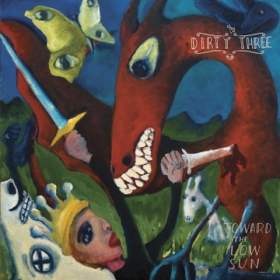 In the interest of full disclosure, I have to acknowledge that this is one of my favorite bands of the last twenty years. I, essentially, worship everything they’ve ever done, and I’ve never heard another band in the “rock music idiom” that ever captured the same zeitgeist in quite the same way.

Violinist Warren Ellis, guitarist Mick Turner and drummer Jim White: their musical chemistry is keenly sublime and their best work is simply beyond words of any kind; their instrumental language doesn’t require any vocals to convey minute degrees of emotion. Having laid all that at their feet, I put off listening to this after it arrived until I was in the proper frame of mind.

Formed in Australia in the early 90s, it’s been seven years since their last album, and in recent years they’ve worked variously with Nick Cave, Bonnie Prince Billy, Marianne Faithfull and Cat Power. It’s good to have them back, and big ups to Drag City for making it happen. They start the proceedings with the cacophonous “Furnace Skies,” which has a burnt umber quality, but they’re just warming up their limbs and amplifiers. “Sometimes I Forget You’ve Gone” tumbles in odd syncopation, with scatter-shot drumming over a hovering, disconnected piano, and it strays a bit from their usual lexicon. “The Pier” shuffles in quietly on a brushed snare drum and within a few bars the violin introduces a gray melody that dances off of plucked strings, and that snare, for three and a half perfect minutes.

Then the ornery first steps of “Rain Song” lift and carry you into a cyclonic round-a-bout between the violin and drums again, with the two pulling against each other in a paradox that, somehow, folds back in on itself. “Ashen Snow” is exactly as the title suggests, with the mournful dystrophic structure of something that might be playing at the end of a Bergman film, the chilling hesitancy hanging in the air. Their method of collaborative improvisation is like an implicit code, where sound-waves decay and dissipate into the ether in some melancholic mini-meltdown on every damn song. It’s not three-into-one, but three-as-one.

How do they sustain that degree of communication? How can every song be so damned heartbreaking? It’s simply inexplicable. They’re touched by God. Their instincts are virtually flawless.

I could sit here stupefied all day and try to put into clever wordplay what it is their music does to me, but that would be the ultimate exercise in self-indulgent futility. Even if you never take anything else away from my work, do yourself a favor and find out about this beast. Thank you.