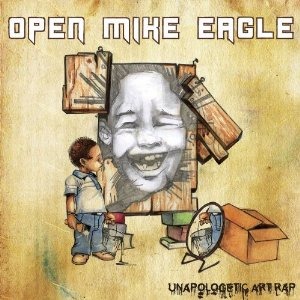 I spend entirely too much time with record reviews attempting to discover the binary code within the notes. In listening to Open Mike Eagle's debut Unapologetic Art Rap, I've written and rewritten close to a thousand words on its rap criticisms, potential rap impact, his influences, how his influences function as post-modernist art, how art rap is an actual genre, how art rap is not a genre but an elaborate inside joke and on and on.

On “Art Rap Party” Open Mike deconstructs his allotted space in the rap cannon down to its comical core, then loses track of his own thoughts and admits, “what's the point I was making?” Man alive, I feel that. I only have to share a few excerpts of my meditations on this record to demonstrate how lovely I let my mind float:

If Posdnous has yet to have a rapper approach him to give
thanks for saying “I won’t apologize for it; this is not a bunch of Bradys, but
a black man’s pride,” he will only need to listen to Open Mike Eagle’s Unapologetic Art Rap to understand its impact.
Open Mike Eagle’s debut takes those words to heart, threading its significance
across the narrative as an albums worth of “I Am I Be” ruminations.

Open Mike Eagle is here to show us how little
has changed since De La Soul pioneered the style, while officially introducing
us to Mike the person. Open Mike Eagle raps like a direct descendent to the
Native Tongues as he lays out his art rap woes with lines like, “I could never
be a simple brother / because world ain’t black and white, some of this shit is
magenta colored.”His frustration continues on “Unapologetic,” which features
Nocando and a chorus interpolation of the Pos line into “not a bunch of
ravings, but a black man’s art.” Open Mike Eagle pulls the curtain on the
wizard with “that's the demographic since it's been adapted / bottled up and
sold as some old nigga magic.”

Note to rappers: 90% of your skits aren’t funny. I could be
exaggerating, but who the fuck cares, I haven’t laughed at a rap skit in over a
decade, meaning I was in junior high the last time I found rapper humor funny.
Open Mike Eagle enlists a professional to handle the humor. On “WTF is Art
Rap?” comedian Hannibal Buress, who was a college classmate of Mike Eagle,
attempts to make sense of art rap battles claiming he’ll “aggressively point
out his favorite elements of this Van Gogh painting” to win American Apparel
clothing and a lifetime supply of hummus.

By the second verse of “Art Rap Party,” the first song on
Open Mike Eagle’s debut Unapologetic Art
Rap, he has satirized a genre, while backhandedly speaking a mantra of the
Project Blowed community. Indeed, to be down with the Blowedians one must “have
original game like James A. Naismith.” Unapologetic Art Rap flexes originality
like it's passé. The difference between Open Mike Eagle and the Blowedians
before him is he might have that special such-n-such to reach listeners that
find Project Blowed’s technically perfect stylistics a chore to comprehend.

Had
“Pissy Transmissions” never been recorded the comparison probably would never
be beckoned, but I can’t help but think of Open Mike Eagle’s knack for
left-brain rhyming as hip hop’s answer to Malkmus. It’s almost as though he’s
drunkenly homaging Malkmus when he delivers, “hope your pretty kitty keeps on
pissing on all your documents / your place smells of polish sausages / we’re
polar opposites / With no common sense, I’ve recently grown cognizant of /
there’s no point in polishing mud.”

These rap annoyances weigh heavy on his mind, inspiring
“Helicopter,” which is two verses of dystopian paranoia, can be interpreted
as Mike yelling Schwarzenegger-style, “Get to the chopper!” Open Mike is far
removed from the first to express concerns of a repressive social control
systems through rap. He makes an impression by invoking Aldous Huxley’s Brave
New World – further proving how unapologetic he intends to be by adding literary wit to art
rap. And you can’t help but feel as though he’s got a handle on our digital
narcissism through social networks as he adds an extra creepy emphasis on the
line “now you Google yourself to find a pic of you sleeping.”

It goes on and on like this with some embarrassing attempts to dissect Open Mike Eagle's debut as too fucking brilliant and post-modernist for it to even have an impact in 2010. So this is the point I am making, give Unapologetic Art Rap a listen. Unless Snoop Dogg drops his 11th solo record this year, you won't hear another rapper with this smooth of a delivery. Unless, Malkmus puts out a record that sounds like Face The Truth with lyrics inspired by the unearthed poetry of Aldous Huxley, you won't have a reason to make Pavement or Brave New World rap comparisons in 2010. If none of this seems necessary in rap, especially the pedestrian literary interpretations bullshit, then write me “go fuck yourself” emails. But I promise you this, listen to “I Rock,” “Mistakes” (feat. Alpha MC) and “Go Home” (feat. Swim Team) for the finest representations of taxonomic boom bap rap – that's all we need from hip hop, right?