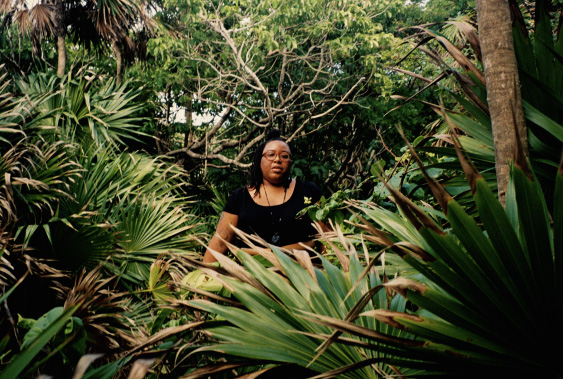 In the 1980 movie A Joyful Noise, Sun Ra journeys through space and observes, “The vibrations are different here, not like planet Earth.”

Earthbound artists such as Adee Roberson strive to channel those vibrations. An Oakland-based visual artist and member of the Black Salt Collective, Roberson’s music as Tropic Green incorporates reggae, house, spirituals, and Afrofuturist themes. Right now, when a lot of Afrofuturist concepts are being imbibed by white museum culture and academia—undercutting their true threat to status quo—Roberson’s work feels especially necessary. Her music sounds visceral and revelatory, conjuring what Toni Morrison calls our present reality’s “hazards and hopes.”

Above, we’ve premiered Roberson’s new video for “Golden Light”, by filmmaker Tieraney Carter, who works at Wizard Apprentice. Cold Beat’s Hannah Lew—whose Crime on the Moon label is set release Tropic Green’s debut 7-inch on December 4—worked with Roberson on the material. Below, she answers a few questions via email.

What does futurism in the day and age of #blacklivesmatter? And also, what does the hashtag in general mean to you as an artist?

I think the hashtag as a thing itself is in one sense useful/powerful in the fight for black life. However, my futurism and my sense of Black liberation are in the retooling of the analog and the past as a type of future present. Futurism also gives me the opportunity to envision a world that we can survive and thrive in. It gives an individual the power of imagination and dreaming, which I believe transforms into manifestation

What if anything do you want us to get out of this as an audience?

I think it is important for Black women to be seen as expansive beings. Like we don’t only fit into these oppressive constructs and specific genres. We create new worlds, new sounds and cosmic experiences.

Doesn’t only have to be music, but what influences are drawing upon right now as you are making the future?

I am drawing upon so much. I can only really name a fraction, which still feels like a lot! I like to think of Tropic Green as a sound quilt. At the foundation, spirituals, dub, Sun Ra, Frankie Knuckles, and Larry Levan influence me. I also listen to a lot of 1960s soul and reggae songs. And because being a visual artist is a huge part of who I am, artists like David Hammons, Betye Saar, Wura-Natasha Ogunji, and Derrick Adams inspire me.