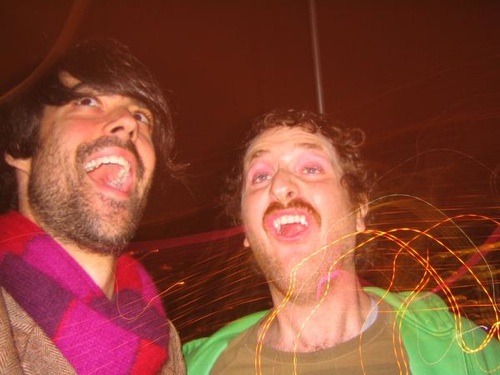 The percussion sounds a little more Bee Gees than Puerto Rico, but Panther is so tight on this track we're about ready to dust off the polyester bell bottoms we never knew we had. They makes it doubly inviting by delivering it with a pared-down post-punk instrumentation that even Dave Allen might find palatable.

Panther has an album called 14kt God out February 22 on Kill Rock Stars.

Seriously check out their MySpace. This is a great track but it's not necessarily representative of the breadth of Panther's output. They're sensitive dudes, too.

Also check out his last album, Secret Lawns. Here's an outstanding, completely over-written review of it:

This one took three listens to love. But we’re not IN love. Could never let myself fall completely for such a cool, impenetrable feline who’ll always leave me with questions. And so fickle, this Panther, with average track times clocking less than 2.5 minutes, walking out just when we’re starting to grasp some meaning from its density. Like, are the drums mimicking delay pedals or is it the other way around, guitars and voices pan-wacky and stuttered out systematically to ape the free-jazzing snare stumbles and broken punk beats on the set? There are tracks like “Rely on Scent” that try hard not to be in 4/4, with rhythmic hits unwilling to fall lightly on the beat but rather sidle up against either side of it.

Panther’s approach to double-tracked vocals is offsetting and distinct, where two clearly separate vocal tracks, often melodically and rhythmically dissonant, result in two separate but equal lead vocal parts that, screechy and plaintive, seem to try constantly to outdo the other.

If the last track’s any indication (which it seems to try to be, a minute longer (at five) than anything else on the LP), Panther’s dissonance might not wait around for the next album to show up. “Tigers Touch” witnesses a synthetic orchestra pushing above the the static-covered surface, the loopy Depeche Mode keys no longer introverted and sinister, arpeggiating in earnest Kraftwerk-worship instead, and crying towards a less austere and inscrutable surface, before the simplicity evaporates and we remember the decadent abstractions of the previous 25 minutes.

Confession: I totally wrote it! Gotcha!