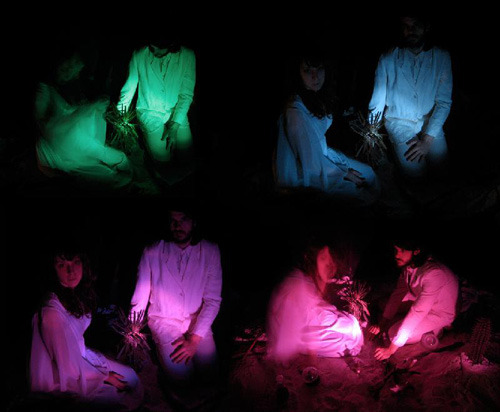 Seven-inch singles are hot. The hierarchy goes like this: Split seven-inch, seven-inch, EP, live bootleg, then full-length album way down at the bottom, after iTunes exclusive and direct-to-video tour documentary. Beach House has announced its own seven-inch for release on October 21. It's being put out by Carpark, the same guys who released Beach House's sophomore album Devotion earlier this year. Here's a track from that album, in case you forgot it:

Sure, the new single has only two tracks on it. Buy it anyway.

Beach House, Used to Be

“Used To Be” contemplates the spiritual and physical effects of life on the everchanging road, love and getting older . The b-side is a four-track demo version of “Apple Orchard” (from the Beach House “S/T” album) recorded three years to the month before the new song. It’s one of the first things Alex and Victoria recorded together as Beach House.

The duo has also announced tour dates, with plans to join the Wham City Round Robin tour in October, joining many of Baltimore's fine group of weirdos (Dan Deacon, Lesser Gonzales Alvarez, Ponytail, Cex, etc) in a line-up sure to titillate.

In August they'll be joined by such hot property as Tickley Feather and Cass McCombs.