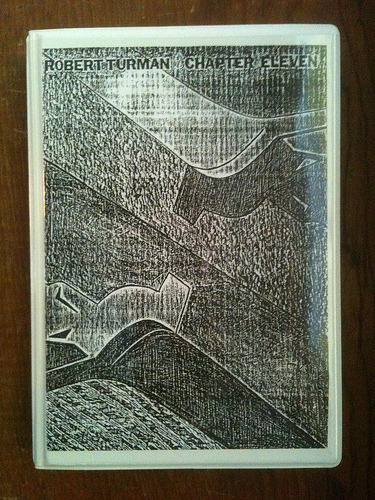 If “hypnagogic pop” is a reimagining of our early memories from the late 70s and early 80s, what is it called when someone was making the same music, but actually in the late 70s and early 80s? Not that I am defining Robert Turman’s work within as stupid a classification as hypnagogic pop, but besides the somewhat shoddy recording quality, you would think that this was put on tape in the year 2010, even though the collection ranges from 1975-1986.

Turman seemed to have taken over where the last of the great synth based kraut artists left off in the 70s, infusing the spiritual meditation music with his own brand of loop hypnosis, slowly moving drones, industrial patterns, guitar fuzz and even some in-your-face 80s style synth work.

Some seriously great reissues have been put out this year, but this is probably the least hyped from where I'm standing, and it fits perfectly with new releases while surpassing them in many ways. I don’t know how well known Turman is in any circle (if known at all). The material on this box set was from self-released tapes, and the original box set itself had a tremendously small initial release on a label I’ve never heard of, but you can easily see how Turman preceeded some of the most lauded experimental artists of today (Emeralds, Oneothrix Point Never, Natural Snow Buildings, James Ferraro, etc.). Good work Hanson Records, especially because I hear you are remastering this and releasing it on CD, and it would be awesome to hear this as clearly as it is intended.

Turman works in both short compositions as well as long formats. The first cassette of this four hour opus is interesting, perhaps less so if you didn’t know it was 30 years old. It’s made up of small and subtle passages, slowly moving in quick times frames, hints of guitar lines and that “hypnagogic” sound. The second tape is where we start moving into mind-melting categories. Turman’s glitchy loops move in minimalist fashion, only varying slightly over the course of a 15-minute composition, yet do so expertly and hypnotically without being monotonous. He slowly blends some sounds into the mix and slowly takes others out while retaining somewhat of a backbone through certain loop oscillations. You can feel all the above mentioned music stylings listed above without being able to pin him into any category. As the sounds jump around from tape to tape remember, this is 11 years condensed into 4 hours. It’s quite a task, but listen to each tape individually if you want to get an idea of how Turman’s music changed and grew.

This article would soon mirror this release in play time if I went in depth on every tape, but rest assured there are also some fucked-up, Residents-esque melodies infused with proto-punk sneer, there are hypnotic, world psych type polyrythms under spaced-out vibes, chopped up beats that range from subtle electronica to borderline hip-hop, minimalist piano interplay, what sound like field recordings, and beautifully gliding synth arpeggios.

It ranges from reverent austerity to bombastic density and kicks ass in all points in between.