Fuck SXSW: What To Do In DC Instead 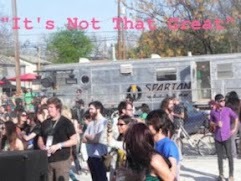 SXSW envy is tricky. It doesn’t seem to hit fully until it’s too late to procure a ticket to Austin for less than $1000 and your only rooming option is sharing a Hotel 8 closet that’s a stone’s throw from the airport as opposed to 6th Street (although if anyone has any extra space in their closet please contact me ASAP).

Although you and I can’t partake in endless Day Parties and buckets of free Lone Star, let us and our livers rejoice with the bevy of excellent shows occurring in the DC Metro area this week. (Also if you happen to be one of the lucky ones in Austin, be sure to check out the DC-centric showcases Sweet Tea Pumpkin Pie and DC Does Texas)

Although Double Dagger’s raw energy and kinetic live shows can never truly be replaced, you can still get the opportunity to see former drummer Denny Bowen in his new incarnation Roomrunner. Leaving post-hardcore behind for a scuzzy revival of '90s alternative, Roomrunner will surely have you layering floral with flannel. Local dark surf Priests and moody punks The Deads open.

Upbeat throwback Obits' snarky rock recalls dirty 1970s New York City, which makes their home base of Brooklyn fitting. Including former members of Hot Snakes, Drive Like Jehu and Pitchfork, these rock veterans are sure to put on a show and if not you’re fully justified to throw a PBR at them. BE SURE TO BE THERE EARLY to see Talk It, which are former members of seminal Teen-Beat EGGS new band.

In honor of Pi Day (3.14) St. Stephens’ is throwing a delicious benefit for local Pirate Radio Station CPR. Things to expect include pies upon pies, old-timey music and a Pi(e) walk. Formed in 1998, CPR has served as resource for the local DC community to get their voices heard and their multi-faceted radio programming provides everything from music to storytelling. Although real men don’t eat quiche, they do eat pie.

Pharmacists with Walk The Plank, Z.T.S and Tideland at DC9/$8

It’s not a week of DC music with an appearance from a local punk/hardcore band. Luckily Pharmacists are there to fill the void with their thrashing sound and “no bullshit attitude”. It will provide the perfect opportunity to get some office-filled angst out during the breakdown.

DC has fast become a city filled with dual ego young professionals, many who double as DJs during the weekday nights and weekends. Party Lights provides one of the sharpest dance nights around thanks to an engaging mix of pop-infused tunes from the 1950s onwards. It also doesn’t hurt that the Black Cat mixes some of the strongest drinks around in order to loosen inhibitions.

Start your Friday night out with some good old fashion punk. Historic DIY space La Casa offers a night of youth filled ideals (Mindset and Dactyl), punk pioneers (John Stabb’s History Repeated), fast rollicking straight edge (Sick Fix) and faster hardcore punk (Coke Bust). Be sure to stick around for Coke Bust, as it is their last DC show for a while. More importantly, be sure to bring a change of clothes if you plan on going out after because things will get sweaty.

Everything is Terrible! Presents: DoggieWoggiez! Poochie Woochiez! All Dogs Go on Tour! at Subterranean A 8pm/$8

If VHS edited art is more your speed than check out Subterranean A for The Everything is Terrible! Tour. From what I can gather some dudes like to edit old videos into something all together new. So like The Books sans instruments. Given Subterranean A’s past solid track record, I’d say this is a pretty safe bet if your looking for a mix of edge and twee.

Drone diva EMA stops by legendary U Street Music Hall for a night of bass drops and otherworldly dancing. Given the superb sound quality of U Street and EMA’s heavy reverberating sound, this show will literally make up for every missed SXSW Day Party sponsored by Qdoba.