D.C. house show #2 at Subterranean A 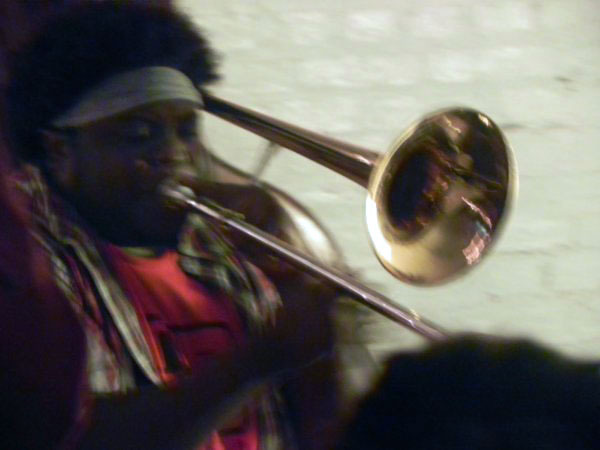 The sunken space of Subterranean A is shrouded in a bit of mystery. Hidden in the basement of a small apartment complex in D.C.’s quickly gentrifying midcity corridor, Sub A has a slight hipper-than-thou feel upon entrance. Walking the darkening path and descending down the concrete steps to the covert lair, I really had no idea what to expect. Was I about to enter the lions’ den of D.C.’s finest hipsters? Turning the handle of the door I prepared myself for icy stares and cans of Dale Pale’s Ale (because PBR is a bit 2009), but instead was greeted by the warm glow of tinkling white Xmas lights and a well-organized ticket table.

Subterranean A started (from what I can gather by the two young dudes living in the basement) back in March. The space made a big splash in late August when the much, much hyped about Tennis played a set alongside Andrew Cedermark and Family Portrait. Since then, Sub A has kept the momentum going this fall/winter with a handful of shows, including the January 5 extravaganza of avant-garde jazz from Richmond’s Fight the Big Bull and Brooklyn’s Darcy James Argue’s Secret Society. NYC’s Search and Restore, an organization built around promoting the thriving jazz and experimental music of New York’s boroughs, organized the show. After playing a free set at the Kennedy Center’s Millennium Stage, Fight the Big Bull and Secret Society packed up their gear and made the 1.5 mile trek across D.C. to play a second set at Sub A.

Their earlier performance resonated so deeply with the Kennedy Center crowd that it pulled a handful of more Chico than Forever 21 clientele to Sub A. The mixing of young and old was refreshing though, making the space less of a “place to be seen” and more one of music appreciation. Fight the Big Bull started things off with their slow building, horn heavy, funktastic jazz riffs. The hour long set raced by, loosing up the D.C. audience with their infectious body moving rhythms.

As Secret Society setup, requests for the audience to move a bit back and a call for extra chairs were made. This all made sense once I saw the final layout of what Wikipedia calls an “18 piece steampunk big band”. They took up nearly half the lower performance space, but the assortment of musicians ranging in ages and gender were all smiles as they wet their reeds and tuned their strings.

The conductor and composer of the wonk-laced, big band sound is Darcy James, a surprisingly young and extremely gifted composer (but Mozart was like only ten when he bit the dust) who hails from our neighbor to the north (Canada), but now calls Brooklyn home. Secret Society’s amazing melding of piano, electric guitar, and assortment of powerful brass emitted a lushness that bounced off of Sub A’s concrete walls and created a warm blanket of sound. Not only was the audience privy to building crescendos of sound, but history lessons were also provided. Before each song James gave a bit of a background to the creation of his compositions. Topics ranged from 18th century Jacobinism in “Jacobin Club”, to the U.S. torture of Maher Arar in Habeas Corpus. And it being D.C., land of the over-educated government worker, a lot of eager hands were raised whenever a question was asked. Usually not a fan of songs’ back stories, I was surprised to find myself actually connecting the “Jacobin Club”’s baritone horn and deliberate sinister key strikes to the feelings of corruption and all consuming power. The song concludes with a frenzy of noise that signifies the insanity of overwrought authority, then quietly beings to die out with a down tempo beat, until the song’s last second are punctured by a quick alto note.

After that display of prowess, Secret Society had D.C. in the palm of its hand, (especially the guy who kept pointing in James’ general direction as if to say “This guy, this guy, he’s something”) and they treated us kindly with an encore of quick tempo “Transit”. By the time the show wrapped up at midnight, Sub A had provided D.C. with three solid hours of innovative and invigorating music. The minimal aspect of concrete walls, sparse furniture, and 24-pack of miller light proved an excellent combination to enjoy some pleasantly mind blowing jazz.