Friday with Some Chick 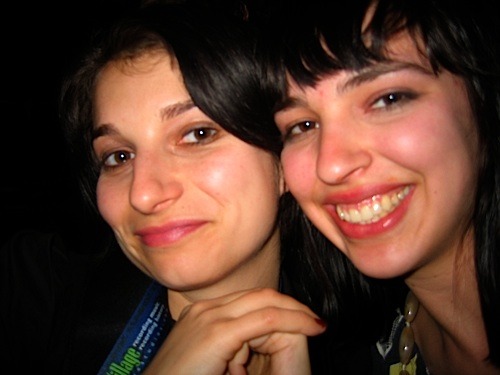 After several wrong turns in the RV, we made it out to Airport Hotel Land in butt-fuck Austin to pick up copies of our beautiful new issue, then finally (late) to our party at Rancho Relaxo. Impose photographer Sam and I walked to Chilito’s for some Tex Mex and frozen sangria. We had just finished our burritos when (Impose Editor) Jeremy and (Viva Radio dude) Glen pulled up in a rental car anxious to get over to Viva’s showcase at American Apparel. I got in the car anxious over the fact I’d seen no music so far that day and it was almost 4pm.My anxiety fled in the intense white glow of the American Apparel store, the same glow as the ol’ AA back home…so garish, so comforting. Said anxiety was further mollified when the Apes began to play. I guess if I had to classify them they’d be punk, but there’s more to their music than fast and loud crowd pleasing. The singer had a foppish falsetto that hinted simultaneously at a classic soul belt and the ironic wails of Hot Topic kiddie hero Jimmy Urine… far more range than one would expect from a punk singer. The keyboard player was doing some interesting stuff, employing draconian organ riffs and running in place.

I power walked about a mile to Emo’s for the Pitchfork party. This was a terrible idea. It was really far and really hot and I had to stop several times for iced beverages. By the time I got there I felt like my feet were going to fall off and I’d missed all of the bands except No Age. But that was ok, because it was No Age. I also got to hang with my friend (Pitchforker) Amy Phillips for a bit, who had just had her ass grabbed by someone attempting to introduce himself to her in a professional context. That guy was an idiot…everyone knows that the distinguished critics over at P’fork do boob grabs and head butts to seal business deals. But seriously now: we’re not sure if that’s how they do business where he’s from, but to everyone who says something like “congratulations” instead of the appropriate response (“what a douche-tool”) when a girl tells you someone just touched her in her bathing suit places… you are also a douche-tool.

Next I hustled over to Ms Bea’s, a home base of sorts where I went to chill and hear bands often over the course of the festival. I caught the end of Pit Er Pat, after which Lucky Dragons unleashed his toy box of electronics. The coolest part was when he loosed his bundle of homemade cloth-and-wire gizmos to the crowd. They worked by touch, emitting sound when held in hand, tapped, or touched together. They also worked if another hand touched the hand holding them. This resulted in a lot of hippie-dippie hand touching which, rather than repulsing me, warmed my cold New York heart. A week of communal living in an RV will change a person. And give her rashes.

After that, Telepathe cooled things off a bit with weird, breathy music from a different realm, which my friend once referred to as “nightmare karate music.” Though they were lacking a guitar player (“our guitarist usually plays a solo here, let’s just pretend” they said at one point), they held the audience’s attention with their odd harmonies, trancelike swaying, and let’s be honest, insanely cute appearance.

Next, High Places sounded louder and more raucous than usual. It seemed they were pushing their trademark sweet vocals, samples and synthesized and hand held percussion a bit harder. Even though they play in Brooklyn all the time, I’m glad I saw them this way, relaxed in a backyard at twilight surrounded by their friends. They were also nice enough to strike a pose for my Polaroid camera. I like High Places.

After Ms. Bea’s I went and grabbed a delicious veggie dog from the hot dog cart, which I ate with much relish. (Hey-o!)

Then I went and saw about half of Fuck Buttons’ set…the first half. I know this band has all kinds of buzz this year and my friends all think they’re the shit (link), but they didn’t do much for me. Maybe I was just way too tired, but after watching the two guys push buttons and occasionally dance around for a few songs, I just wasn’t feeling it. So I left and randomly crashed some chick’s birthday party at a gallery on 4th St, where I ate and drank for free.

While bro-ing down with my new friends I realized it was almost time for Mika Miko, so I bade them farewell and ran over to Emo’s IV for the Kill Rockstars showcase. Despite an increasingly pounding headache, I jumped around through their whole set of bouncy, lo-fi riot grrl-ish post punk. This band never fails to bring the party. I wanted to stay for Shy Child but I was really starting to feel like shit from a mixed bag of exhaustion, sun, and the brain crash/dehydration that follows ill-advised Sparks consumption. I left the reporting to Nate and went back to my hotel to take an Aleve in order to rally for a late night bridge party with No Age, because they are No Age.

Getting a cab at 2am in Austin is nigh impossible, but I persuaded a pedi-cab to pull Sam and me over to the pedestrian bridge on his bicycle. On the way some dudes shouted “are you going to the bridge party? Where is it?” and we invited them to jog along and help push us to our common destination. We were greeted by a scary number of people; the entire bridge was packed with folks in various stages of intoxication. I couldn’t see the band but I could hear them, and as I double fisted some warm Natty Ice, I decided that was enough. The city reflected itself in the river and I caught up with everyone I’d been too busy to see during the day (the true purpose of an after party). Miraculously, the cops didn’t break it up and nobody got hurt. I stumbled home around 4am.