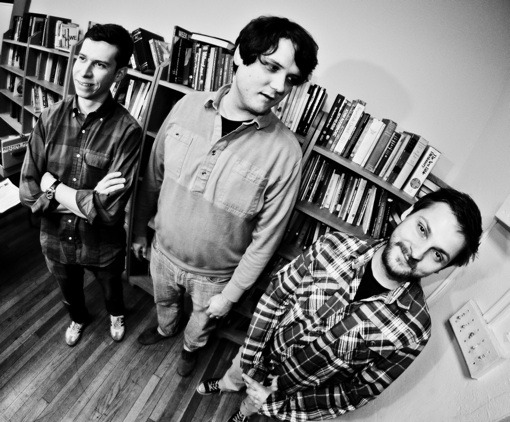 More Humans appeared on the DC scene via Pittsburg as a breath of fresh air. The twangy indie pop sound heard on the trio's second EP Demon Station was also a departure for the formerly hardcore-only label Cricket Cemetery that released the five-song EP back in 2011. Hardcore or not, Demon Station grabs the listener by the ear and brings them along for a ride full of rich vocal harmonies, emotive lyrics, and melody arrangements, bringing to mind past DC darlings The Dismemberment Plan. I recently spoke to Clinton Doggett via email about the initial confusion surrounding their sound, the creative process behind Demon Station and what's ahead for 2012.

Mason-Dixon by More Humans from NIGHTTIDE on Vimeo.

More Humans exploded on DC last year playing local venues and Positive Force Benefit Concerts. What is the backstory of your formation?

We are old friends who have been playing together for a long time, but a few years ago we renewed our commitment to music, returned to the studio, and starting on our current trajectory. Thankfully, it’s been a really rewarding process for us, and we’re very grateful to have gotten the response we have in D.C.

The twangy indie pop heard in your sound is a departure for the mostly hardcore label Cricket Cemetery. How did you all and Ian get hooked up and start releasing together?

It definitely is, but I think Demon Station is one of a few releases for Cricket Cemetery that can probably be viewed as departures. Our friends in The Tender Thrill (who we’re playing with tonight) just put out a record through CC this week, and they don’t exactly fit the hardcore mold, either. What’s cool about the label is that it’s less about a certain sound and more about the community of people surrounding it. Ian is passionate about the music happening in the city right now.

Most people in DC associate Cricket Cemetery with being a hardcore label. Have you found people surprised when they discover the more melodic and mixture of genres in your sound?

Yeah – especially because we had the word “Demon” in our EP title – I’m sure some people did not expect us to sound the way we do. I’m not certain that we’ve surprised loyal fans of the label, but I hope we have.

Critics and fans have made note of More Humans’ innovative use of vocal harmonies and evocative lyrics, heard especially on “Mason Dixon” and “Shopping Cart”. Was vocal harmonizing something intended from the start or did it develop during practice?

Marko and I have been singing with one another for a long time, and vocal harmonies have always been a central component the band’s sound.

Demon Station has a great balance between up-tempo and slower songs, which is an impressive feat for a five song EP. Do you envision that being a similar case for a full-length album?

Absolutely. We’re all interested in making music that changes, grows, and grabs people. We deal with a lot of dynamic shifts in our songwriting, but I guess overall we’re a much louder and more driving band than would be suggested by some of our older recordings.

How do you utilize the different tempos to evoke the message or mood across to the audience?

Most of it is about structure and the layering of parts in our songwriting, and less about changing tempos. I don’t think it’s good to always be starting and stopping, but we do like to play with people’s expectations, too.

Is there one tempo you prefer more?

Do the lyrics or instrumentals usually come first in the creative process?

The instrumental music always comes first for us.

Songs like “Mason Dixon” off of Demon Station, or “Shopping Cart” and “Piles” off of Barbaro deal with running from obstacles, or the possibility of starting anew. Are these ideas from personal experience or more just a general musing on being in your twenties/early thirties and trying to figure things out?

I’ve moved around a lot my whole life, and as a result I guess I’ve always thought a lot about my relationship to a place. I think it’s really interesting how people’s identities are tied up in places, either as being part of a place or being in opposition to it.

It’s hard to say, exactly, but we’re writing a lot of new material lately and we’re excited about where the sound is going. For the newer songs with finished lyrics, they deal a lot with magical thinking.

Now being based in Chicago, how do you find their local scene to be in comparison to DC?

Chicago is great city, but our focus has remained on D.C. because most of the band still lives there. We haven’t played in Chicago, but hope to this summer.

Do you guys have any plans on doing a larger tour or more recording in 2012?

Yes, we have plans to both get out on the road this spring and to return to the studio later this year to record a full-length.