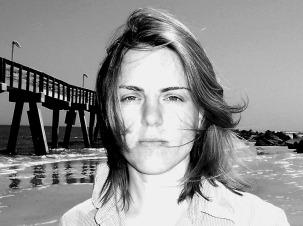 Meeks is the first novel by Julia Homes, and it's about a bachelor, a reviled figure in this universe who might be regulated to the government-run sugar factory. To avoid this fate, he lives in the park, avoids the police and must find a wife who will have him.

Sounds kind of quixotic or chaotic or both, but the New York Observer calls it “a postmodern parable about American passion and paranoia, like The Great Gatsby as told by Don DeLillo” which sounds pretty good to me.Julia was born in Saudia Arabia but later moved to America and lived a bunch of places and is now in New York working at Rolling Stone.

Meeks came out earlier this month from Small Beer Press and an excerpt can be read at The Collagist. Here are the five best things she's read recently:

When I was revising Meeks, I didn’t read much fiction—I read a lot of nonfiction, or I spun the wheel of the Internet late into the night. Since finishing the book, though, I’ve been trying to go back and read some of the novels I haven’t gotten to for one reason or another—it’s good to be back in the dark, dusty heart of things.

01 Molloy, by Samuel Beckett (from Three Novels, Grove Press). A landscape so alien and ultrafamiliar, it feels like a terrifying shadow that’s been stalking your brain for years has suddenly caught up. I hadn’t read Molloy in a few years, and I’ve now reread it twice in the past two. To me, it’s like being in outer space deep in the middle of your own brain, and when a fire bursts to life in the cold, damp countryside where Moran is camping and waiting for his son, you’re so grateful for the warmth of the fire, though you know it won’t last, and when Molloy’s mother rises, disturbingly, from his memory, you can’t help you want to take comfort in this familiar entity…but you really can’t. If I were to be asked (this week) which book I’d like to pack for my exile on the deserted island, I’d choose this story (?) of a human (?) lost in the “woods.” I’d probably go immediately insane, or else it’s the only book that would make any sense there.

02 Doctor Glas, by Hjalmar Söderberg. A short, epistolary novel about a lonely doctor in 19th-century Stockholm who becomes obsessed with one of his patients—the young wife of the corpulent, corrupt local clergyman. I think it’s kind of a masterpiece of loneliness—loneliness in the face of the ignored loneliness of other people. I’ve never been to Stockholm and, somewhat stupidly, I envision it being always blanketed in snow, so there was something exotic and extra oppressive to me about the description of the hot, empty streets of Stockholm in summer. It wasn’t the delectably cold sensory refuge from New York that I’d imagined, but it’s an incredibly astute, refined book about suffering, back in the days when people didn’t cry out in their misery and loneliness! Not that we do now—we just seem to.

03 The Plague, by Albert Camus (Time Reading Program, 1962). And as someone spending August on the banks of the Gowanus Canal, I was naturally drawn next to The Plague. Continuing with the theme of personal desolation in stultifying locales…in this case, the North African town of Oran (“a town without pigeons, without any trees or gardens…a thoroughly negative place”). Then the rats appear in their multitudes, and soon hemorrhagent little corpses are piling up in the gutters, and then it’s the townspeople who are collapsing in the street. I’ve been reading the Time Reading Program special edition from 1962, which has blood-red drop capitals and a woodcut image of the Angel of Death hovering over each chapter. It’s been sitting on my shelf for years, and when I finally opened it, I noticed the inscription: Camp Lejeune, North Carolina, 1964 (where my father was with the Second Division Marines waiting for his battalion to be deployed to the Mediterranean). The first sentence he underlined in the book is “And it was then that fear, and with fear serious reflection, began,” and the last is “There are more things to admire in men than to despise.”

04 Dante: Poet of the Secular World, by Erich Auerbach (NYRB Classics, 2001). And then it was on to the hell fires! I was visiting friends in the Catskills a few days ago and found this at a used bookstore, where soothing harp music seemed to be on infinite loop and the transaction occurred so serenely that I left feeling like a criminally impatient city person. I haven’t read much literary criticism in the past few years, but I’m finding this to be a riveting, thought-provoking book—and a beautiful one. This 80-year-old case makes the ongoing popular argument over “realism” feel musty and thin.

05 Adventures Among Ants, by Mark W. Moffett (University of California Press, 2010). Mark Moffett stands in a torrent of marauder ants so you don’t have to—though he sort of makes you want to stand in a torrent of ants. The sense of adventure (and the reportage of actual adventure) that pulls this book along is pretty irresistible, whether he’s describing the ant-colony superorganism using thousands of ants to form “a kind of arm flung over the ground with fingers that were rummaging through the soil and low plants” or thousands of these empire-building, cooperative creatures marching in formation across great distances to slaughter enemy soldiers and to enslave the children of their neighbors. And any of us, no matter where we live, can observe some small part of this immense system at work. I think that’s amazing.