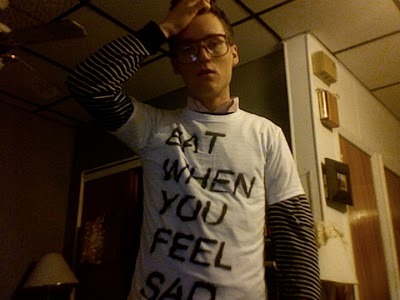 Zachary German's most recent book is Eat When You Feel Sad out
now from Melville
House. It's about a guy named Robert and the things Robert does.
Robert often plays music, eats arugula and feeds his cat. On occasion,
Robert will leave his house. The best explanation I've read of the book is this one over at HTML Giant. Zachary German blogs here and records his purchases here.

Impose: I was really interested in the musical choices for Robert. I also noticed on your website that you come up playlists pretty often. Were the albums and songs that Robert plays similar to your own musical preferences? By listing those songs, were you hinting at some 'deeper meaning' in those songs that mirrored or reflected Robert's state of mind… or were they just random?

Zachary: I think in choosing a soundtrack for the novel it had less to do with my preference and more to do with an attempt at realism. From my standpoint, being born in the suburbs in the late eighties, getting heavily into indie music via the internet, and moving to a major city in the mid “oughts,” etc., I didn't really have a choice but to have “Big Pimpin'” play on MTV Jams, indie kids talk about which version of “Heartbeats” is better, and for “Crimewave” to playing at bad parties. I made an effort to not have the songs be symbols for Robert's state of mind or for anything else.

A lot has been made of your style of writing. How'd you come across that style and what appeals to you about it compared to more “descriptive” styles?

I wanted to write the book that I would most want to read. Books that have a lot of dialogue and actions are my favorite books. I get bored and often stop reading books when they have too much description, things like that. The style for “Eat When You Feel Sad” initially came out of trying to copy books I liked a lot at the time, including Tao Lin's “Eeeee Eee Eeee” and Ann Beattie's “Chilly Scenes of Winter,” then gradually realizing that what I ideally wanted to create was different from them, and then working towards that goal.

I was excited by how minimal his novel seemed when I first read it, and I tried to emulate that style for a time. While writing it occurred to me that the style could be taken further than he had done. I made every sentence subject-predicate-object and thought a lot about how to talk about specific items, with the goal of making a very consistent novel. By the end the only choices I was really making were whether to use the word “Robert” or the word “he,” for it to be the most beautiful. That being said we like a lot of the same books and it seems only natural that some of our writing would be similar.

Despite the title, I never really got the impression that Robert was eating when he felt sad, but I guess he was. Maybe because he was primarily eating healthy food–I don't know I always associate “sadness” with junk food, but Robert always goes for arugula and healthy stuff. So, can food have an emotion? Are these sad foods to Robert, or just that he happens to be sad when he's eating them?

The title began as a joke; it kind of seems like the most offensive sentence possible, to me. Throughout the publication process I considered changing it a lot, but never did. It seems catchy. Does contain a lot of eating, sadness. As for Robert eating when he felt sad, I think he feels sad during nearly every word of the novel, so he does do it. I guess to answer your question about junk food, I, and I guess Robert probably, do see Chinese food as the saddest of foods.

Have you been generally pleased with reviews and how the book's been accepted? Surprised by any comments or reviews that you've seen?