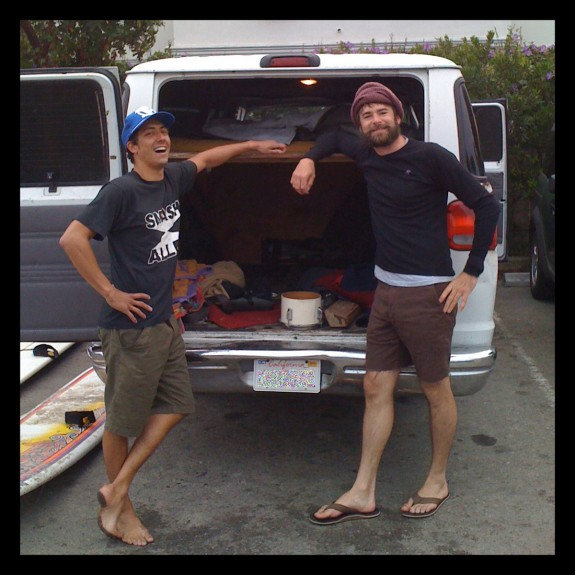 Earlier this year, we shared the wondrous, fuzzy single “to think i was someone else” from Big Sur, CA duo The Shrouded Strangers – off their fantastic new album Night Prancing. That album dropped in June via Burger Records, and it has stuck with us since through countless repeat listens. A lush document of modern psychedelic surf-rock, ’90s lo-fi indie, and British-invasion era sounds, Night Prancing is an enthralling listen packed with catchy garage melodies, wavy vocals, propulsive guitar riffs, and hypnotic rhythms.

From the simmering reverb-soaked intro of “Locust Heart,” to the jangly anthem “(He’s a) Bad Guy,” to the rollicking, rousing album closer “Girl Lives in a Time Castle,” Night Prancing is a diverse record that runs the full alt-rock sonic gamut. It’s also a record brimming with honesty and personality. To help break down what went into their creative process, we had Mike from The Shrouded Strangers share with us FIVE things that inspired the album. But of course, be sure to give it a spin below. Night Prancing is out now. You can purchase it HERE.

Before we recorded Night Prancing I spent some time in Seaview, Washington, on the coast. Played a show at the Sou-wester RV park, hit up thrift stores, and sang karaoke (“Hurts So Good”) at Rod’s Lamplighter. The coastal Pacific Northwest is, of course, very evocative and vibey. Fast forward a few weeks. We’re sweating in a cramped basement in Brooklyn (aka The Time Castle) and need to come up with lyrics for songs we’ve written and recorded. That whole Seaview experience certainly influenced the lyrical and thematic direction of the album, “Night Prancing,” which, as you know, is the soundtrack to an “unrealized film script” of a 1950s surfer gang in Seaview (“the Night Prancers.”)

Burt’s known for his songwriting prowess and big hits, but around the time we were recording Night Prancing I was really enjoying his pre-fame deep cuts like “Joanie’s Forever,” “I Could Make You Mine,” and “Wendy, Wendy.” He frequently deploys the classic modulation trick, and so we did the same, to devastating effect, in “(He’s a) Bad Guy.”

Word on the street at the time was that New York City Mexican food has improved dramatically. We dined at a place around the corner from The Time Castle and it was pretty good!

Aaron, myself, and honorary Stranger John, whose scintillating guitar work and backing vocals are all over the record, met at college in central Virginia. Travis, who played tambo on “(He’s a) Bad Guy,” hails from the region, as does Duane, who engineered and played bass on the record. Oh! And Tom, who’s putting out the record on vinyl, still lives there. As our pal Nikki once said, central Virginia is “the region that smelt us.”

A Lack of Planning

As per usual, we ended up penning many of the tunes on the spot. This lack of preparation inspired us to record songs. I lovingly remember flipping through a rhyming dictionary that was lying around the Time Castle as Duane patiently waited for us to lay down lyrics. Thanks to the rhyming dictionary we were able to rhyme “fist” with “exorcist” in the song “Seaview Holiday.”