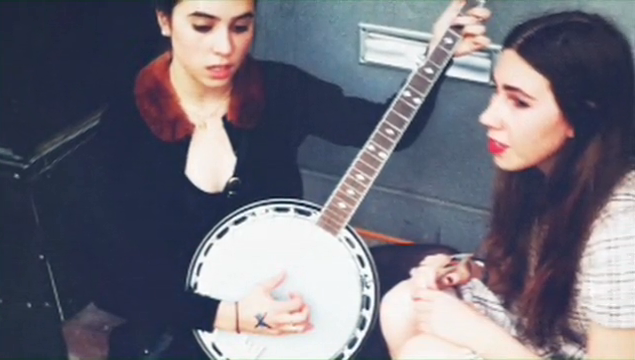 Zosia Mamet, star of love song to the millenial generation and softcore pornography television show GIRLS made considerable waves this week when she announced that she and her sister, Portia or whatever, had started a Kickstarter to fund a music video. Their band, The Cabin Fever Sisters, which consists of one banjo and several hands reaching up through Hades to beat on drums/bodies/whatever one can hit, asked for A MERE $32,000 to make their musical “dreams come true.” Since the Kickstarter began five days ago, the Mamets of David Mamet family fame have raised a whopping $1,955, a close 1/16th of their goal. With only 9 days to go, the waters seem troubled for the junkyard hobo Stone Mountain duo, and they are not getting any less murky. In the spirit of mutual collaboration, I've started a Kickstarter of my own, wherein I pick from a shallow vintage Philadelphia A's hat to determine what I might spend my money on instead.

1. Four thousand cartons of Tim Tams imported from Australia on a slow night-steamer helmed by a kangaroo in a Chanel sweater

2. A 3D printer to print the opposite of a deep, spiraling pit of sorrow, and more Tim Tams to help climb up through the void.

3. The Scripps National Spelling Bee winner, Arvind Mahankali, won $30,000 last night after spelling “knaidel,” a German-derived Yiddish word for a matzo ball. I'd pay to see Mahankali donate it all to the Mamet Kickstarter because he feels pity for them. Pity. P-I-T-Y. Pity.

4. How much do those embroidered rugs cost with your family's photo on them? I'll take forty. With the Mamet family portrait on it. For my foyer.

7. Who do I have to throw money at to invent the ability to retroactively take screenshots? I'd give $32,000—no more, no less—so that I could have been smart enough to screengrab the misspelling of “privilege” on the Kickstarter page (originally spelled something like “privledge”).

Bonus Round: I read once in a lasting footprint in the sand from beneath a since-abandoned Birkenstock that if you know the password, and have $32,000 to barter with the Sun Gods, and you've given up enough on remaining closesly in touch with real society, you can just move to Black Rock Desert and live yearround as if your whole life has become one big Burning Man. You'll catch me riding that art car built from requisite parts found in my parents' basement into the Nevada sunset. Peace.