Across the Rust Belt into Chicago: one with the arcade rats 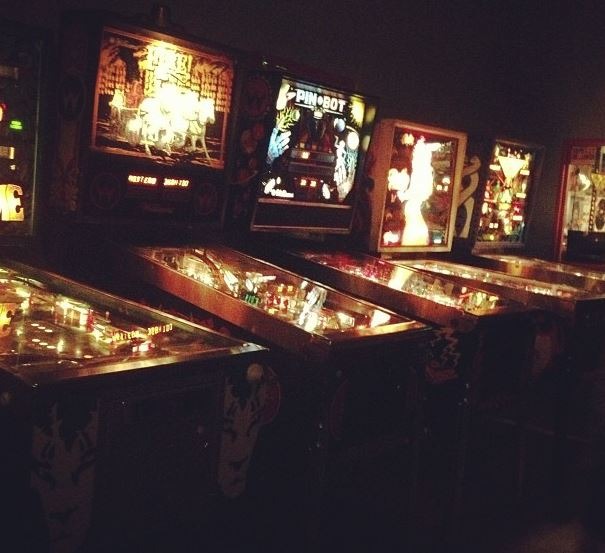 [Ed's Note: Our journey through the fruited plains continues from Buffalo down the Rust Belt into the Midwest's brightest beacon, Chicago. If you're just joining us read the previous Imposition tour entry here.]

As we cross the border and pass signs for Kent State, Derek starts singing Neil Young and Blake chimes in falsetto, “four dead in Ohio!” When Toledo native Blake tells us about the best street name in Ohio, the obsessive search for Fangboner Road begins, with the boys up front getting ready to snap shots at multiple overpasses, anticipation building until it finally flies by. Derek drums on the steering wheel along to the hardcore CD his Buffalo door buddy gave him.

We take a momentary pause in Toledo to meet Blake’s parents at Burger Bar 419 for a healthy dose of juicy iron and assorted slaws – all smiles and joshing around, two real sweethearts and some seriously delicious meat. Derek taps out for half an hour to destroy the toilet while we munch down and talk about the Doobie Brothers.

From there, it’s dark and there’s at least three or four hours to Chicago, but we hit the road running and make it there with only a few uneventful stops, excitement building as we enter the glowing yellow lights.

We arrive at our crash pad, which turns out to be the best spot we could hope for: above Logan Hardware, the record store, which we get to run around in unsupervised like kids in a freaking candy store. Our awe only goes to the next level when our host and storeowner John Ciba cracks open the back door and lets us into the arcade. At first the machines are only ghosts, powered down in shadows, but John flicks them on one by one, lights going and sounds ricocheting around the room in a neon cocoon as we flit from machine to machine, playing pinball, Donkey Kong, TRON, Mrs. Pacman, and more. We break open the Genesee cream ale and our little bottles of whiskey and bounce around between games for hours before crashing. I split off to go to Dorothy’s, now called The Go Bar, down the street and enjoy PBR-priced craft beers under revealing overhead lights with Chicago friends, spending the night in a basement cave with an Iguana named Gina.

Back at Impose headquarters, the pad itself is fantastic, two stories with the second just a room of bunk beds and a huge TV, and downstairs in the living room the biggest record collection with a separate section for Fugazi that’s at least an inch thick. Kick-knacks and cats are everywhere. Our favorite cat, Pizza, soft and grey, is the best host in Chicago, while THE OTHER ONE Klaus nearly eats us and will try to run away at least twice under our supervision.

On Friday, the night of our show, we split up and wander in the city. Most of the Impose crew eats at Fullerton's Diner, while I enjoy some friends’ sudden Martha Stewart tendencies and home-cooked pancakes before heading to Bangers & Lace to sip down Bloody Marys with good friend Pool Holograph and get stupid with other old friends before tonight’s Imposition. We all meet back at the Empty Bottle and mingling in the bricked-out cave, sipping whiskey and beer in the thick crowd and enjoying the darkness, maybe even dancing in it a little bit, as our boys from Brooklyn, The So So Glos and Big Ups, return to take the stage alongside Cult of Youth. Buried in the back of the room, the stage is lit in magentas and blues, and you can enjoy it from all angles in the shadows. Laughing by the pool table or in the red-lit bar area, Chicago has the relaxed, homey feeling I always miss when I’m not here, even though the wind rips our face off on the way there and back.

That night, most of the team returns to Logan Hardware and attempts to turn on the arcade machines with varying levels of success, accidentally locking themselves in while locking the cat out but managing to keep the Genesee close. I head back to a very large basement to dance even more of the night away before picking up a friend who randomly has a 40 on the street and returning to her super-soft loft bed.

Our night in Chicago ends with a far too early wake-up call as we hit the road right behind a much-needed shot of caffeine to get to Memphis by eight for our last pre-Austin Imposition.

For a clearer picture of our Empty Bottle show, check out our photos section.