Courier Club – “We All Want To Be There” video 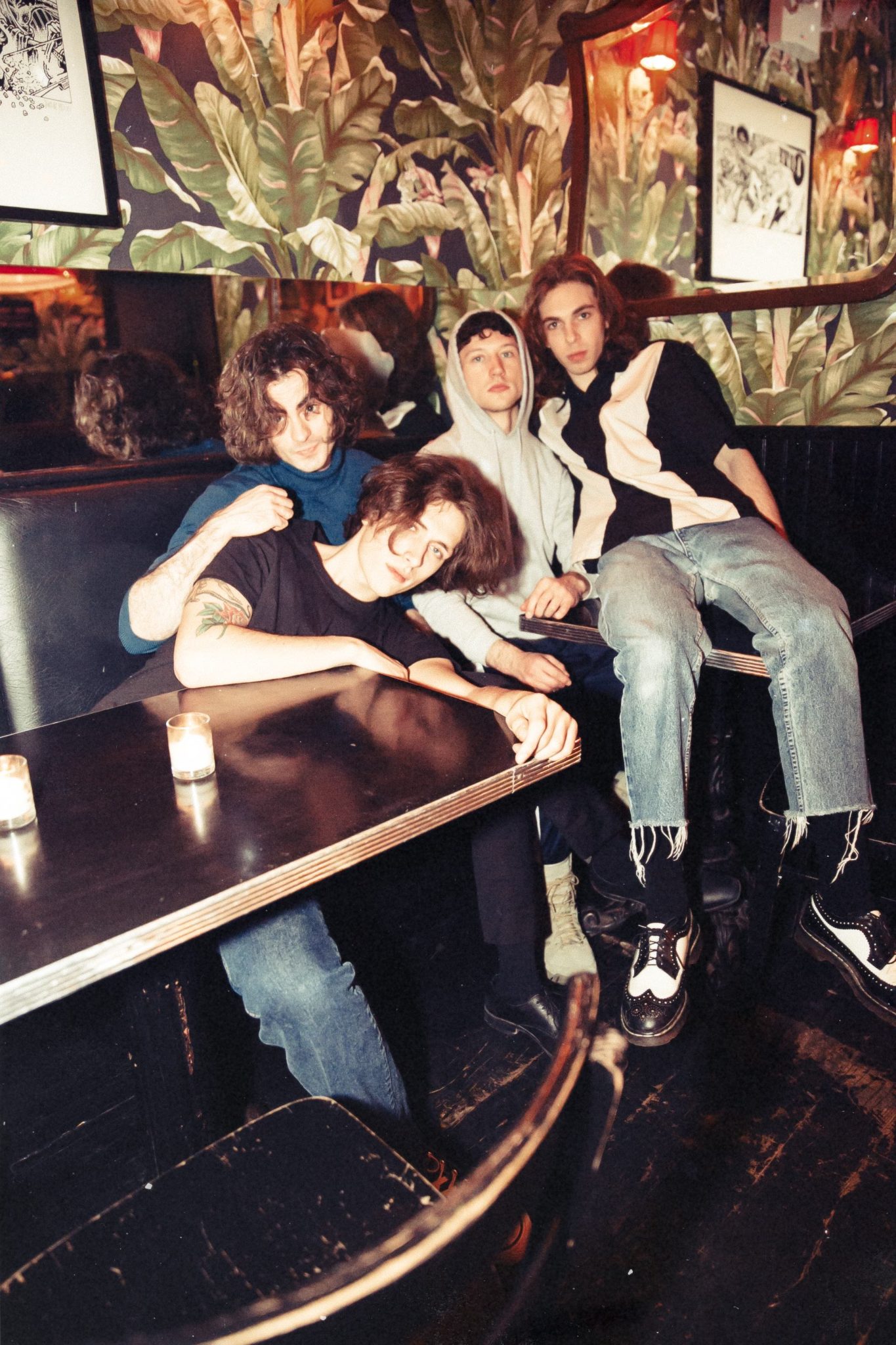 The band is gearing up to release their debut EP Drive Like Your Kids Live Here, riding high off the buzz of its propulsive lead single “We All Want To Be There.”

“Before we started writing the EP, we found ourselves at a ‘Making Time’ rave in Philly and subsequently fell in love with dance music,” the band shared. “The room felt foreign, refreshing, void of hierarchy and outright fun. This experience was the fuel that sparked the direction of the EP. ‘We All Want to Be There’ is an ode to that newfound community.”

Today, Courier Club dropped the music video for “We All Want To Be There,” and it’s a dazzling clip featuring a whole lot of moving parts. Here, shimmering lights and cinematography consume a warehouse rave where the band shreds through the track to a sea of dancing bodies. Nervy camera cuts, dozens of spazzed-out extras, and the band’s primal stage presence are all on display in this addicting clip. Impose recently visited with the members of Courier Club to talk about the making of the video, their forthcoming EP, and what it’s like to make art in a post-post-modern world. You can check out that interview and watch the amazing video for “We All Want To Be There” below.

“We All Want To Be There” sounds like it could be an anthem for the ’20s – it’s powerful. You can feel how generational the message is just by watching the video. Do you see this as the band’s mission statement for the upcoming EP?

We wouldn’t say it’s our “mission statement” since we’re not trying to convince the listener of anything. Instead, it’s simply an expression of our minuscule perspective on the world. “We All Want to Be There” is about our discovery of the underground dance scene around us at a time where we felt creatively stale and more or less bored with our current setting. The community we stumbled upon felt free and vibrant; a place where we could express ourselves confidently yet still feel like a part of something larger than us. If you scale that vignette up, it very well could exist as a symbol of that same overarching struggle that defines your twenties, finding your voice and place in the noise.

What was the day of the shoot like, go in depth! Where was it shot? I can imagine it being a hectic process keeping everyone entertained while shooting something so high energy, especially if it was a long day.

The video was the largest operation we’ve taken on so far, including many working legs lead by our friends. Everything from sourcing 50+ outfits to wiring the electric to shooting location. The scale was way out of our budget, so we had a ton of fun scheming creative workarounds to further the illusion. Luckily, the day of the shoot was unexpectedly smooth. The 40+ extras were champs, dancing shot after shot for the eight-plus hours. In an attempt to keep morale up through the exhausting day, we organized an actual rave we host called “Tunnelvision” as a wrap party for the cast and crew.

Talk to us about modernity: the pros and cons of living in a post-postmodern society. What’s your take on how culture affects all of us subconsciously? What have the past 5 years done to our cultural psyche and as a relatively new band how have they affected your formation and direction?

To be honest, we weren’t aware we were living in a post-postmodern era. But looking back, we noticed a distinct shift sparking around 2008-2010. After googling “post post-modernism” and surfing the blue text on Wikipedia, it seems this movement is very tied to authenticism, which has a significant effect on our formation of a band. Due to the enormous amount of information at our fingertips nowadays, the shroud artist’s could once hold over themselves has become nonexistent. We believe this is great for art since it sort of forces you to reveal more angles of yourself while barring you from portraying an enigma around you like you’re some “rock god” or equivalent archetype. We’re a band full of nerds who discovered their favorite bands through video games and like to pretend to be rockstars for about 45 minutes on a good day. Our first concerts were to see arena rock bands with our dads and the first band tee we got was probably from Target. There’s no reason we should ever be presented as ethereal beings spewing culture out of our pores. Our songs play with this idea lyrically from time to time and the general ethos of our band is to keep everything authentic and transparent. There’s also the decentralization of online media, the death of the genre (birth of new ones?) and the massive change in the way we consume, which this post-postmodern era has brought forth. Those discussions are for a different day.

Lastly, tell us more about your first EP as a band coming out this April. What are you most looking forward to in 2020?

Drive Like Your Kids Live Here was the first time we had the chance to build a complete collection of tracks. Through its creation, we were able to explore a wider sonic and visual identity and are hoping this work allows listeners to connect to the world we’re trying to build around our band. We’re excited to develop this with our upcoming live shows and other events we’ll be hosting over the next year.