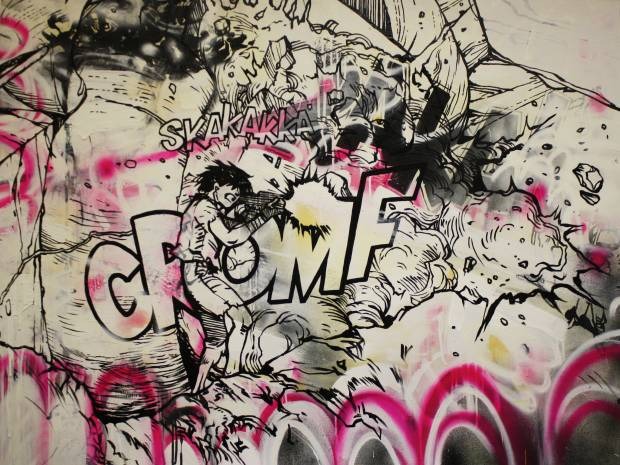 Our friend John Felix Arnold III continues creating his world of comic book abstraction, post-apocalyptic heroines, and looping astroknots that make up his ongoing Unstoppable Tomorrow World of Future Antiquity at the Old Crow Tattoo & Gallery in Oakland with his new show Should I Stay Or Should I Go, opening July 14. Featuring a new Installation, new paintings and new sounds from Grizzly Grimace and Him Downstairs, this show is a precursor to Arnold's upcoming series of shows in Japan with both Ken South Rock and DJ I-am Jesse. In a recent conversation, Felix gave us his projections on the pop art multimedia collaboration of craft and energy with both of the aforementioned Japanese artists.

“When I performed the first time in Shinjuku at Shinjuku JAM last year with Ken Minami, we had no idea of the outcome before we got on stage. We immediately unified by pure chance and made something inexplicable happen together that informed one another as we created right then and there. It was life changing. This is truly the next level we are embarking on. Adam and I have gotten to know one another quite well since then. I worked on their album cover and spent a lot of time with him and around his neighborhood in Brooklyn on my most recent trip to New York. I foresee the three of us really creating an amazing symbiotic relationship in every performance in Japan that will allow our energies, all three very strong and very intense, to really have a conversation and create an experience that will warmly overwhelm the senses of all that come to see and hear it. I foresee some amazing, colorful, expressive paintings coming to light fueled by the perfect flow of sound and timing that Ken South Rock have together.”

“I am really excited and honored that I am going to be able to communicate with entire audiences of people from big cities to small towns and villages through this collaborative medium we are embarking on. This is really a once in a lifetime opportunity, and I foresee a lot of awesome stories, relationships, amazing music and art being created, as well as a lot of amazing food devoured and a multitude of new ideas and projects begun for the three of us out of the experience.”

And then it is back to Tokyo for a week for in house commission piece for a famous DJ named I-am-Jesse in Shibuya. Arnold will be then painting for another week, documenting and live streaming the process to a soundtrack from the DJ live, and then having a big party the last day. We inquired for further details of Felix’s mixing his art with DJ I-am-Jesse's tracks work and the art/music scenes of Shibuya.

“I can say that I-am-Jesse and I are both a hardcore ingrained mix of New York City's most amazing musical and artistic evolution and heritage. His tracks and his background are eclectic, sometimes bizarre, full force, and well realized like many of my paintings. I am really looking forward to this experience as well. I have about five days in Shibuya to create a big beautiful painting and we are planning to live stream some of the work while Jesse does his thing on the ones-and-twos. Then there is a reception and unveiling party at his awesome Shibuya residence. I expect a truly expansive mix of everything from soul to techno to classic NYC underground rap tracks to house to Japanese punk rock to Japanese pop to disco to reggae, all on a big journey through musical and artistic evolution, as spun both through narrative as well as music to the back drop of Shibuya. Two New York boys collaborating and coming together from different mediums in one of Japan's most important, iconic, creative and insane neighborhoods! I have a feeling we are going to be making some things happen in Shibuya, through both painting and music, that are going to create a great conversation with that which is already happening all around us. I am kind of squirming in my seat with anticipation of what it will be like to create something in a neighborhood in which I naturally drift off into dream world much like Blade Runner, or Akira.”

Beginning July 19, JFA takes on Tokyo for a week with the amazing Ken South Rock for the first week of the Brooklyn group’s Volcano tour. A three man multimedia performance series is promised, where KSR plays and JFA paints, everyone feeding off of one another's energy to create an amazing sense of rock energy in the audience. Nightly, each of the works painted will be auctioned or raffled off at the end of each show with all proceeds from the show tickets sales and the painting to Earthquake Relief Charities.