Lil' Boosie and the drug and murder climate of Baton Rouge 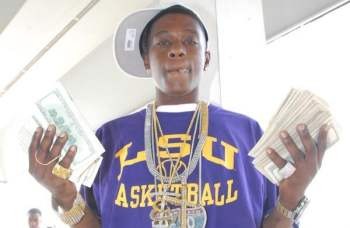 It seems Baton Rouge (aka Jigg City)
rapper Lil’ Boosie might be a little too “Bad Azz” for his own good.

Not only
is Boosie serving 10 years for drug and gun charges, but last Thursday Boosie
was indicted on charges of first degree murder as well as drug charges for
smuggling lean, jiggs, and weed into prison. On top of that he is also
connected to at least five other murders in the Baton Rouge area. This might come as a
surprise to most people but I lived there for the past five and a half years. Within the city, the news of Boosie’s murder for
hires were common hearsay. On the day after local rapper Nussie
was shot in the head, my boy at work nonchalantly told me that
Boosie was the one behind it. Half of me believed him, the other half thought
it was some shit he was just telling me to scare my white ass.

Another truth-rumor is that Trill Entertainment, the label that Boosie and Webbie and other rappers in Baton Rouge are on is nothing but a front for cleaning up dirty money. It’s pretty obvious too, when you look at the cars these guys drive and realize that the label as a whole has only had a few hit songs. Those hits weren’t even that big either.

Along with the first degree murder charge, Boosie faces three counts of possession with intent to distribute codeine, ecstacy and marijuana, three counts of conspiracy to commit possession with intent to distribute narcotics, and two counts of conspiracy to introduce contraband into a penal institution. He worked with his girlfriend, who was a prison guard at the prison he currently resides in and another prisoner. This is a good example of the gangster mentality. He’s the biggest rapper in Baton Rouge and as Gucci Mane would say “he got long money” but he still feels the need to hustle, even behind bars.

The man (or really kid) police suspect to have done all of
the murders is 17-year old Michael “Marlo Mike” Louding. In many of Boosie’s
songs he gives a shout out to Marlo Mike. In one song he even has the lyrics, “Ain’t no love in my body, Marlo Mike up in da backseat begging for a body.”
I’m sure that’s not going to help anyone besides the District Attorney Hillar
Moore.

For those unaware of the situation in Baton Rouge let me explain it real fast. I
live in the middle of Bushwick, Brooklyn now and have not once felt scared. Baton Rouge makes it look like Chelsea. There were 75 murders in 2009 alone. That’s in a city of roughly 225,000. According to FBI statistics,
the national murder rate is about 5.4 per 100,000 residents. Last year the
murder rate in Baton Rouge
was 32.7. That’s six times the national average. It’s not condensed to one area
either. Granted North Baton Rouge is the worst
part and where a good bit of these murders occurred, but they’re spread out
all over the city. Lil’ Boosie was born, raised, and lived right by the LSU campus on W. Garfield and
the LSU campus is one of the whitest places I’ve had the displeasure of being.

If you want a true feel for what some parts of Baton Rouge are like all you need to do is watch “Thuggin’ It and Lovin’ It.” This video stirred up controversy when it was released a year ago. When the District Attorney got his hands on it he took action, locking up a few of the films “actors” for parole violations. The video depicts guys showing off their stacks, drug stash, gun stash, and shooting automatics into the air. Right out in the open. The full video can be seen here split up into 10 parts on Youtube. If you don’t have that much time on your hands, there is a 26 minute “highlight reel” here. The scary thing about the video is how these people act. They are obviously gone on something, whether it be lean, jiggs, or just a shit load of Grandaddy Purp. More than likely it’s a combination of all these, and no matter what shape they’re in, they’re still going to be packing heat, a lot of them with automatics. This video is one of the realest videos of street culture in the South out there.

Crime has gone down so far this year and it would seem like
the new District Attorney has a lot to do with it. I remember for the longest
time cops would just play the quota game. They wouldn’t even go into the
bad parts of town. They would just pick on rich white college kids and hope
they’d have an 1/8 of weed on them, and that they’d snitch on their dealer. I can think of six
people I knew personally who had cops bust down their door, only to find an ounce or two of nug, because some freshman frat
boy who they sold to snitched on them.

Since 2009 the sheriff has increased focus and funding for the Special Community Anti-Crime Team which focuses on most of the neighborhoods featured in “Thuggin’ it and Lovin’ It”. He has also put more of a focus on sponsoring community programs like meet and greet barbecues, neighborhood cleanup efforts, and school supply giveaways.