Laptop Magic and Taking A Pain Pill in Pudding 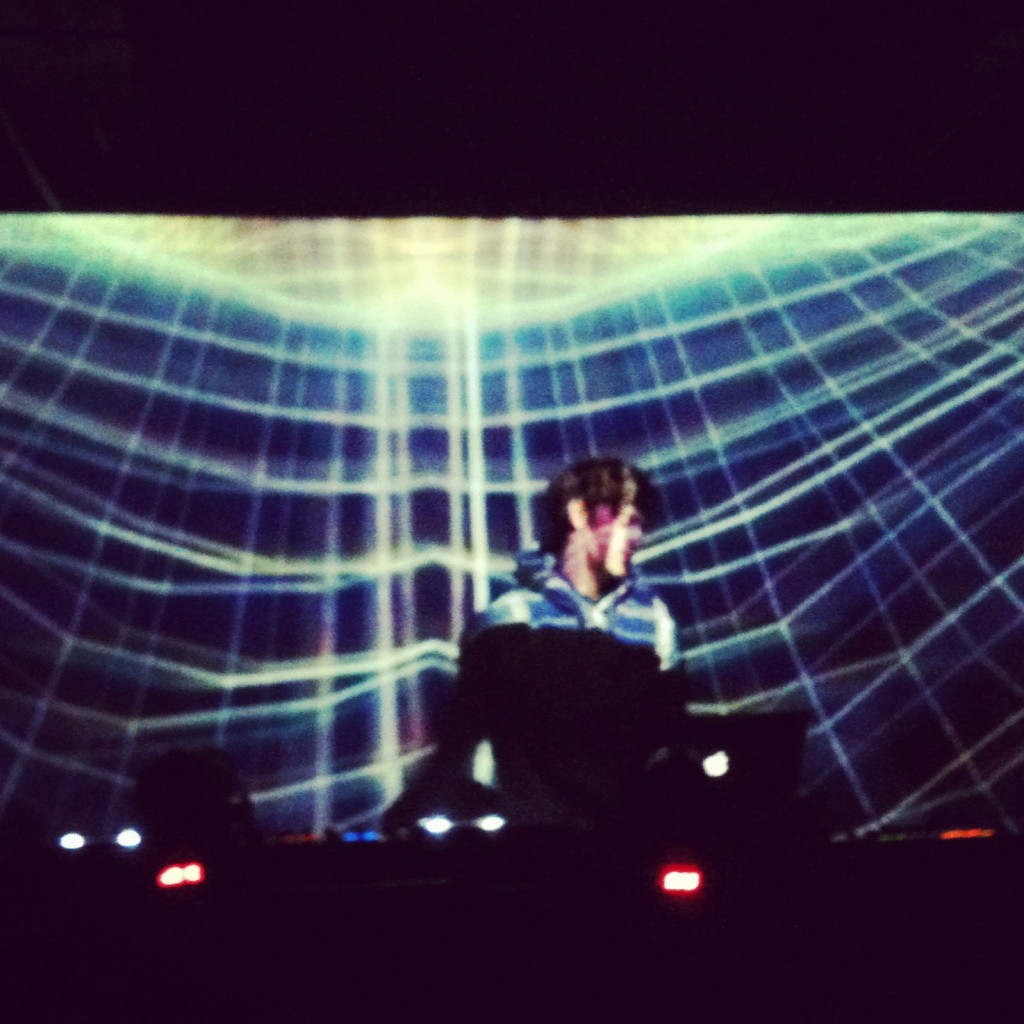 On the night before the Magical Properties tour hit Philadelphia, I was still on the fence about whether I wanted to even go. It was on a cold Sunday evening and I was coming down with something, and dance music had never been my forte, especially when I wasn’t in the mood to dance. While looking up how to get to the venue, I found an interview with the headliner of the tour, Daedelus, that piqued my interest and ended up ultimately convincing me that I definitely shouldn’t miss out. In the Village Voice, Daedelus presented the type of music he was curating with this tour as a multidimensional and effective change in the current digital music landscape. (Heady, I know.) He had presented the varied sounds within the genre and on this tour as “an intimate affair with a lot of chances taken.” After reading the interview and then following up with another by Salva, I decided that it was well worth the cash and the emergence into the elements just to see what four DJs with very varied outlooks and sounds could sculpt into a big underground venue in Philly.

The dungeon-like space that is Underground Arts looks like the familiar nightclub set from The Fresh Prince of Bel Air. It’s a place where you can imagine goofy old Will getting kicked out over one skirmish or another, either a failed pool game or a run-in with a burly bouncer. It’s below the ground, stocked with neon lights, and industrial but it’s also clean and recently opened, so its essence is wildly unthreatening. And if there was any place to do as Daedelus had said in his interview, to take a lot of chances in an intimate space, it was at Underground Arts on Sunday night. When I arrived, it was clear that the attendance would be low, the night was cold, and the crowd appeared to be waiting in earnest for the man himself, but no one else. If there was a time to take risks, it was now.

When I had first seen Ryan Hemsworth DJ at the Echoplex in LA, it was at a sold out show with his home label, We Did It, and it was on the night of the Mayan predicted end of the world. It was an end of the world party and that meant that we partied like it was the end of the world. The lineup was out of control (Shlohmo, RL Grime, Hemsworth, Groundislava, D33J, Juj, and Nick Melons) and during every set, there were at least thirty people on stage losing themselves to the sound. Though I am something of a newbie to electronic music and DJing, I developed an early appreciation for the idea that it’s weird to go to a show to just watch a DJ, well, DJ, so the obvious alternative is to dance. Right. Obvious.

It was clear when Samo Sound Boy hooked up his gear that that wasn’t really going to happen tonight. Not many people had come through to show support. What made matters even more frustrating was that you could tell from the looks of the crowd that most of them were there to see soundbender, landscape-creator Daedelus. It was a crowd of forward-thinking hippie types, a few of them even wearing sweatpants or pajama pants and beanies, with slouchy posture and grungy facial hair. It wasn’t the chic, designer-wearing, fashionable crowd typical at a party the likes of Boiler Room or the We Did It showcase. In a lot of ways, it was surprising. Philly isn’t known for its hypersensitivity toward fashion like LA or New York, but I hadn’t known that there was such a jam-band crowd at the ready. But the mighty force of DJing is that if it can be done on your laptop, it can be done anywhere, and with no concerns for the crowd who turns up. This made the night one of the more interesting and effectual shows I’ve seen in a long, long time.

Samo Sound Boy brought an immediate power to the crowd that felt raw and infectious despite the empty room it was bouncing around. There was a lot of Euro influence, some really bass-heavy beats, and even a touch of industrial know-how. Everything about the man’s set was weighty, pounding, and strong. And there is nothing more exciting than witnessing a sound like that presented without remorse but with a complete artistry. It can’t be easy to DJ to an unforgiving crowd, and though most of what he mixed stayed strictly club, a sighting of Trina’s “Red Bottoms” made his set feel epicly cohesive and unapologetically varied. Samo Sound Boy is an LA guy, but his set felt one part Eastern Europe, one part Silver Lake, and one part bedroom with the door closed, location undetermined. It was rich and encouraging and a mighty beginning to what was sure to be a genre-defying evening.

Ryan Hemsworth, who I had ultimately come to see, is a rising star in the remixing world who, with his emo’ed out mixes and pretty boy shyness, has charmed all walks of life in the music industry. He’s hard to miss even if you don’t like him; every new track that has an impact in the digisphere gets touched by him in his characteristic never-over-the-top way. His production is soft and subtle and feels like water: he easily morphs to the container he’s given. Hemsworth has sampled voiceovers from off-kilter Cartoon Network cartoon Adventure Time and from a lost Crank Yankers-esque puppet video led off by Busta and E-40, and he’s always working on slyly making you listen to things you’d never have considered. A Lykke Li drum beat here, an Elliott Smith sample there, and most recently his inclusion of “Anthems for A Seventeen-Year-Old Girl” by Broken Social Scene in a mix for The Fader. But he does it all while reminding you of the virtues of popular tracks by Kendrick Lamar, Drake, TNGHT, Kanye, and other club staples. He’s feeding you a pain pill in pudding.

Hemsworth on the road is a different brand than you would expect from what he posts on his varying social media. His uploads and mixes are direct and honest and golden, but he seems to really fill into a space when he allows himself to take risks in a live environment. There were a few moments during his set at Underground Arts that he seemed to be working really hard to make the most out of what was coming next. He bounced around playfully, enjoying himself, looking at ease, but never slowing down. His sound, even now when he’s at a formidable height in his career (Just Blaze made an appearance at this show the night before), continues to evolve, and he’s taking a lot more chances with his crowdwork. His set in Philly was reminiscent of his recently published Fader mix—more tonally experimental, less reliant on familiarity to grow a vibe and win people over. It seems that Hemsworth is taking time to breathe, and he played with that vibe at the show. Undoubtedly, the work behind this new development comes from learning that the greatest payoff comes from letting his sets grow organically—not forcing any catch or hook too quickly. He worked it well, emitting the cool, unaffected aura of a coy artiste.

Salva’s following Hemsworth wasn’t exactly the opposite of what the young buck had just accomplished, but it was an encouraging factor for anyone who doesn’t know or understand the electronic music world just yet (that person, really, being me). Salva presented the crowd with an hour of totally screwed and twisted takes on everything from the real gritty underbelly of the trap and dance world to a touch of hip hop to the more heavy bassed-out club tracks. He really knew and appreciated how to work a crowd, even the small one that Philly had given him. Though there was some dancing earlier in the show, when Salva took the stage and dominated the room, things started to reach the height of percolation. His crowd really looked for guidance, accepting the shift into a faster-paced, more maniacal group of tracks, albeit less artistic. The performance quality of Salva’s set was enhanced once the crowd realized how deeply manipulative it was—the DJ was one step ahead at all times, knowing exactly what we wanted to hear, how we’d react. It was during Salva’s set that I realized that DJs are bona fide puppet masters. Not a recent development, I know. But from watching his set on Sunday, it was easy to tell that Salva is the master Geppetto.

After a short break, the headline act that everyone had come to see took the stage, making the crowd, which had condensed itself into a tight pack of followers, step forward in delight like a rambunctious, tie-dyed cult. Daedelus appeals to a certain set of music-lovers because his music expands, releases, follows, and innovates with tones and sounds that are unique. It’s like watching a familiar movie but all of the characters have been cartoonized or replaced by child actors. It’s unsettling and it’s work, but it sends colorful shots to your brain synapses. As it was imminently obvious from his first touch, Daedelus is never afraid to let something build and resonate. He’s an artist who is in no hurry. And half the fun of watching his psychedelic, genre-bending work with sound is that the people who watch him are so interesting—such a spectacle to enjoy. There was more than one glowstick in attendance, lots of lazy attempts at popping-and-locking, and an interest in the music that looked so eerily like ennui that you had to wonder if the crowd was really hearing what Daedelus was bending. But that’s just the stoner crowd, I guess. My affection for them is stronger after Sunday night’s shower than ever.

The Magical Properties tour is an amalgam of voices, sounds, and genres that speaks to anyone who likes to see what can really be done with a laptop, some processors, and a turntable or two. It’s compelling not because of its individual acts, but because of how they interact together to form a complete picture of a scene on the rise. There are admittedly participants who used to be unaware of the scope of electronic music’s impact (me again), but after seeing the wide breadth of talent, trial and error, and triumph at Underground Arts in Philadelphia, it’s clear that the sound speaks for itself.