MORE: A Look At Rod Bastanmehr’s Latest Work on “Otherwheres” 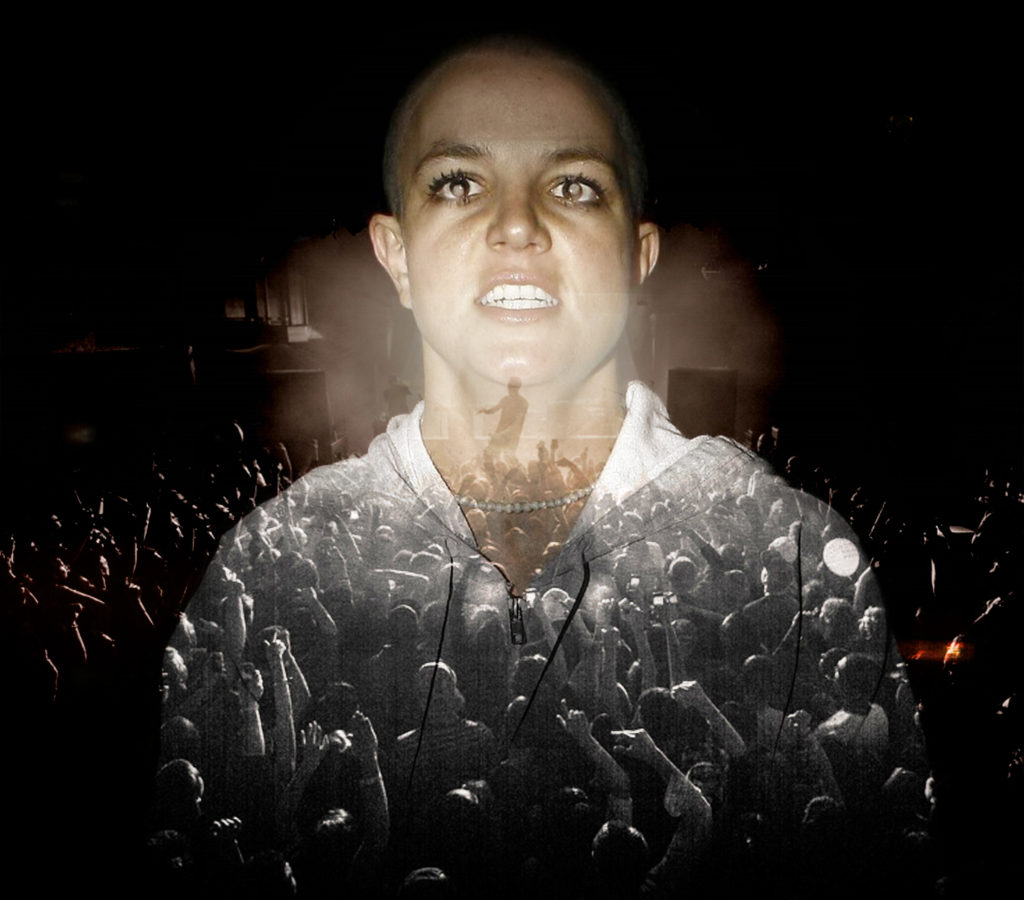 Otherwheres is a Bay Area art and literary magazine filled with intimate, mostly true writing and photographs. The fourth issue, DISASTER, features stories of stomach flu and heartbreak, a death at brunch, fire and loneliness, and photographs from the desert of Baja Norte. “MORE”, by Rod Bastanmehr, appears in the issue as well.

Being young is traditionally made up of direct influences and inverse reactions. You have your mother’s eyes and your grandfather’s stubbornness; you borrow your sister’s clothes, and do the opposite of what your dad says. Britney Spears was that. She was the tornado and the cellar; the thing to be sucked into the eye of or to actively stow away from. Our parents were scared of her because they felt locked out of something that they wearily recognized. It was different for girls, but Britney traversed across any divide, even while she came to embody a certain kind of female whiteness. I don’t know what I found her to be. It wasn’t sexy, but it wasn’t not sexy. Most everyone I knew at the peak of Britney’s moment was either emphatically embracing her or carefully cultivating an identity that used her as a rubric of everything not to be. It’s a powerful thing. I loved the bitch.

There was no irony or contrarianism in the water yet; Britney was a pretty sincere affair. My childhood bedroom was adjacent to the main street of my suburban nest, and the route between my middle school and the nexus of houses meant you would pass by my massive window during a walk in either direction. If you did, and most did, you would see a huge Britney Spears Pepsi ad, and the lack of shame I had about presenting it was comical. It was unruly. I was devoted to the church of Spears, and for six or so years, I would soak in her cultural footprint like it was a divot in the sand made especially for me. The beauty of childhood obsessions is understanding that something is yours and it is not yours; that you can be in love with a thing that everybody in the world loves too, and still be convinced it belongs to just you.

Britney was everyone’s; by 2006, she didn’t even belong to herself. The punchline had been that she was a carefully curated hybrid of Disney and MTV, meant to stroke that sweet spot of corporate demos and provide a blueprint for every label head. The reality wasn’t too far from the truth, but it was leveled as an insult where it would later become a defense.

By the next year, something significant had changed, and I was getting more enjoyment in watching these celebrities—always women—self-destruct. Crisply edited TRL video blocks had given way to shaky paparazzi footage, and my relationship to celebrity began to morph entirely. There was no product they could produce greater than themselves, so icons like Britney became the show. I remember watching Mariah Carrey saunter onto the TRL stage in a long t-shirt, harmonizing with literally nobody and pushing an ice cream cart to the edge of a nervous breakdown while thinking to myself, “this is either the end of something or the beginning.”

In September 2007, seven months after the death of Anna Nicole Smith and two weeks before I was slated to move into my college dorms, it was announced that Britney would be opening the MTV Video Music Awards. Considering that she’d been responsible for some of the ceremony’s more iconic images—the sparkling nude body suit, the anaconda draped around her shoulders, the kiss with Madonna—the news felt like a fitting final act for what was proving to be a tragedy of Greek proportions.

Months prior to the performance, photos appeared online of Britney at Esther’s Haircutting Studio in Tarzana, California, grinning ear to ear as she took clippers to her hair and shaved it all off, like a Manson girl by way of that spider baby from Toy Story. The images were the low point in a year mired with drama. Britney was seen driving with her child on her lap; she was seen walking out of gas station bathrooms barefoot; she had tearful and angry run-ins with paparazzi, including one particularly disturbing video where she sat curbside crying, pleading for them to go away as they snapped photos of her, illuminating her brittle skin against the dark expanse of Santa Monica. I remember a particular flash bulb that lit up two palm trees behind this crying multi-millionaire and I was sure that I’d just witnessed peak Los Angeles.

The photos of her shaving were like receiving test results concluding positively that the act of observation changes that which is being observed. I couldn’t fucking get enough. Too young to fully understand the emotional implications of a woman defined by beauty choosing to cut off all her hair, the absurdity floored me. I posted the photos all over my MySpace, I tiled them as the wallpaper on any computer I could access, I treated them like a fusion of trading card and meme.

I spent the week before the VMAs counting down to Britney’s opening performance like it was the Royal Wedding, texting obscure lyrics as a way of prepping my friends for some impending event, and even dubbing it D Day. I wasn’t sure if I was excited for a comeback or a downfall, but both seemed equally thrilling if not nearly as plausible. By this point, Britney’s antics in Vegas, the hosting city of that year’s VMAs, were well documented, and told us that she was busy doing everything but attending rehearsal. The impending train wreck seemed like a sure thing.

When the show started, the first image was the back of Britney’s head, with strands of hideous hair extensions hanging like a peroxide shower curtain, straight and stiff. When she flipped around, attempting to re-acclimate us to the boiling temperature of Britney’s Britney-ness, I could immediately tell that there were two performances going on simultaneously, chiefly the one where Britney ill-fittingly attempted to find footing in her own skin. I can still feel that weird stomach drop when I think about it, and I remember watching as the opening notes of “Gimme More” began to pulse through the room, with something like twenty dancers moving hypnotically around her. Meanwhile, Britney Spears was wandering in the center of the storm, lost. She would make slow attempts at dancing, and then just start awkwardly pacing around the dancers, often tucking her hair behind her ear as she melancholically mouthed along to the pre-recorded track.

I could not believe what I was seeing, a bald headed pop star wandering the stage. I let slip half a giggle, which prompted my dad, begrudgingly but patiently watching with me after a weekend of hype, to ask, “what is she doing?” I looked at him baffled; then back at the TV, where Britney was shimmying in half-time.

I thought that the public spectacle of her breakdown had served as a replacement of her performance, but in that moment it actually informed the totality of it. I wasn’t watching a complimentary disaster take place; this was the disaster itself, the embodiment of all the thoughts and feelings that had gone to fuel the career of someone I was obsessed with, and a natural end point at once: the girl in the strangely fitting lingerie bobbing around in distress to a song that was so comically on the nose it bordered on performance art.

And out of nowhere, I started to cry. I felt the lump in my throat overtake all of my oral real estate, and began to lip-quiver for those next three minutes. The optics of the moment blurred together. I couldn’t tell whether we were taking something from her or if she needed something from us. The transaction didn’t tally; no one was sure what the performance was about. And I watched it glassy-eyed wondering whether any of my principle fascination with Britney Spears remained. It was like a funeral march for another version of myself. I thought that I’d outgrown Britney Spears, but sitting and watching her self-destruct, I wasn’t sure what I’d grown into. When you’re young, the answer to any “why” is always “because”, and I suddenly felt so far from the things that I loved and recognized about popular culture, and if those things informed large portions of my value system, what did my watching the fall of Britney Spears say about me?

By the following week, a video of a YouTube user named Chris Crocker screaming for the public to “Leave Britney Alone” would begin making the rounds, quickly out-embarrassing the performance itself, but I couldn’t shake it. A couple years later, I would be sitting stoned out of my mind in my friend Lollie’s living room when we would randomly re-watch the video online, and where I would quickly start crying all over again. Even today, watching those three minutes virtually destroy me.

How do I even begin to put into words just how radically this performance changed me, altered my state of empathy from elemental to fundamental? I would never categorize any variation of myself as cruel, but there was certainly something to my younger flamboyant queenliness that meant considering feelings was slightly off the table. Britney Spears got on the stage of the Palms Resort in Vegas in 2007 and had one of the worst performances of her career, and she changed my life. Sitting alone in my living room, watching my dad shake his head as he walked out, I was left bathing in the glow of this nightmare, tearing up as I tried to understand what exactly I was responding to, and I still don’t know really. It’s weird to see someone’s entire persona undone in a matter of minutes, have someone go from carnal sexuality to unnerving vulnerability in an outfit she may not have picked out for herself; your brain fills in pockets it didn’t even know were empty, and these people never change back.

Since then, I find myself averting eye contact from celebrity train-wrecks; any enjoyment feels hypocritical now. I keep my distance from cultural artifacts that don’t bring me joy; I’ve stopped anticipating the end of things. Every once in a while I’ll catch myself hate-lurking someone famous on the precipice of a meltdown, perhaps for a moment absorbed in the chaos of the feed, but for the most part I walk away. Sometimes I run.