Amid rolling earthquakes around the nation and civic ambivalence in the face of economic duress, at least we can always look to the musical tabloids for laughs and various curios of wonder. This week Bon Iver and James Blake realized they could cash in together on bland pop played at half-speed's time with a tune called “Fall Creek Boys Choir,” St. Vincent got pretty comfy and “Cruel” in her Huff Po video debut, while Wavves has been making MTV and Fuel TV spots that included backing up the GZA for an odd collaboration on “Liquid Swords.” Conventional wisdom has it that “caving in” is the new “cashing in,” and never underestimate the buzz power of Facebook-ready gossip sites for your debuting needs. Before you get too caught up in over analyzing the fluff, here are some note worthy moments of interest from this week in no particular order.

Brighton's Sam McGarrigle of Gross Magic got himself signed to Fat Possum on the heels of completing his much anticipated Teen Jamz EP. The EP is available for preview and download here, compliments of the Sounds of Sweet Nothing. With mondo buzz from the single “Sweetest Touch,” the single rocks through the past 3 decades of guitar movements at a flip book's pace with a sound and style that is fresh and sure to be an instant favorite.

And while their session for Bowleg lacks the vocal effects that blended oh so well in the single, the guitar work strummed by black polished nails will not disappoint.

The Bird Day from Buffalo, NY make moody electronics for moody people. Their follow up to last year's Collect Vibrations comes our way by the month's end with Fed Odd due August 30. While so much music in our contemporary trappings concerns itself with the excessive use of vocal effects, Bird Day seems to have the exact measurements for how much and how little effects are required to blend in with the electronic production and beat sequencing without sounding too clean and sterile. Case in point, you can actually hear the breathing amid the treatments. Enjoy.

Lighouts have released a maxi single named after Charlie Sheen's infamous trashed hotel accomadations, The Eloise Suite available through the digital channels and streaming here for your previewing needs. Despite the existence of obvious James Murphy/David Bowie comparisons and pre-existent, poetic waxing of “insert-your-favorite-underappreciated-indie-star-here,” I'll perpuate the vicious cycle, and throw my comparitive two sense into the collective review hat by describing their sound as something in the affected vein of Stuart Price attempting rock n' roll.

We have been into Gem Club since we first heard their EP Acid and Everything a few months back. With their Hardly Art debut album Breakers around the corner, the video for the title track presents nature images of Iceland through a soft focus lens with plenty of dissolving transitions that move with the elegance and grace of the track's understated cello and pensive piano progressions. The beauty by which the band paints love and loss evokes mental sketches of rehearsed words for a journal entry that will never be, conjured up while sitting alone in forest or field.

Also, here's a stream of Gem Club's single “Twins” from Breakers, which will be unveiled and available September 27 on Hardly Art. 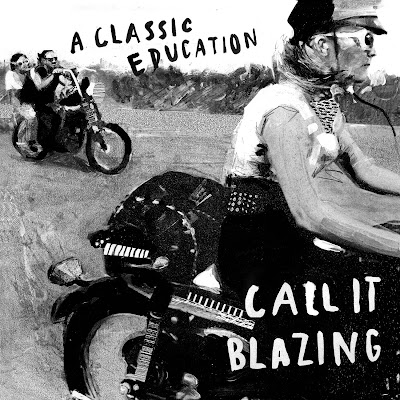 A Classic Ecucation anounced the other day that their debut album Call It Blazing will be available October 25 on Lefse Records. But it gets even better; word has it the album was produced by Woods' Jarvis Taveniere and has a sound that will cause the freak folk set to salivate at the very thought of replicating it. CE could be one of the new acts to re-orrient musicans attention back to songwriting and away from counting effects pedals.

NPR has been working over time on their cool status these days, like presenting the G-Side featuring G-Mane track “Relaxin” like nobody else dropped it on the web last December. We are happy to present it to you to compliment to the remaining days of seasonal leisure before Labor Day anounces the return of Fall.

Speculator first grabbed our attention with Nick Ray's flanging subconscious mix of Weekend's “Coma Summer,” and this week have been turning heads within the music press realms. Thanks to the media savvy Altered Zones, they are offering a stream-only listen of Ray's upcoming album Nice, being released September 30 via Underwater Peoples. For pre-orders, go here.

So if that album stream failed to blow your mind, send thank you notes to Spin, who still care enough about the listening public to give you more than a glimmer of the Jacuzzi Boys Glazin' before its August 30 release date.

Also check out the latest mixtape from Curren$y a.k.a. Spitta Andretti, with hosting duties performed by DJ Drama. If Weekend at Burnies chilled out your summer, consider Verde Terrace a happy continuation.

It is with pleasure to debut the following stream from Sacramento's The Young Vintage, who have finished recording their first album Somethin' Blue. With the recording featuring the original three piece line-up, it is interesting to note that they have recently combined talents with over half of the Cosmonauts (Sacramento's answer to the Phenomenonauts/Aquabats geek pop question through costumed alter egos that vaguely resemble Marvel X-Men characters). “Rite of Passage” combines the cumulative thoughts that surround the coming of age mind between the no-mans-land-years that lie between 18 and 21, set to a pop punk ballad.

Coming to you from Bloomington, IN is the latest family act sensation Dreamers of the Ghetto. With sparse equipment, big ambition brothers Jonathan and Luke Jones, Lauren Jones(Luke's wife), and Marty Sprowles bring a cinematic passion that continues a climb for for some 7 minute 20 secs. Perhaps some head food for the Edward Sharpe crowd and conscious, hip commune dwellers. Keep an eye out for their debut album Enemy/Lover October 4 through Temporary Residency Ltd.

Dreamers of the Ghetto – Tether by INDIGENOUSPromotions

And in keeping with the season's Rock the Bells hype and Reebok Classics Presents;

R.I.P. Silk Flowers
Impose Main
The time a boy pretended to have Lyme Disease to avoid hooking up with me