Lost in the Sensorium 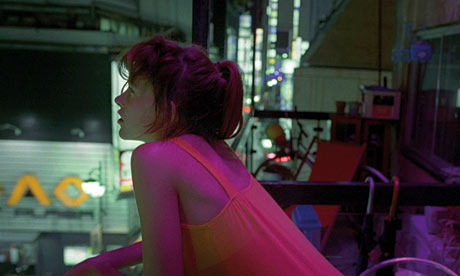 ENTER
ing Gaspar Noé's latest film is an immediate assault on the
senses. First via a bold, strobing credit sequence, the first of much strobing, presented almost
too quickly to read, and then, suddenly, by a barrage of main titles
that looks like all the typography of a teeming Tokyo arcade running
amok at once. The last word proves to be an actual neon sign and we pull
back with comparative grace and find ourselves in the first person
viewpoint of Oscar, whose face we will only see in mirrors and
out-of-body experiences. Because for the entire two-and-a-half-hour
length of Enter the Void, we will experience all of — and only — Oscar's perceptions, in real time, seamless but for eyeblinks and
lapses of consciousness. It's an audacious move, perhaps a ludicrous
move, but it immediately marks the film as an incredibly ambitious
undertaking in purely experiential filmmaking, a two-and-a-half-hour experimental film. And it works. Both as experiment, and, more surprisingly, as storytelling.

Because Noé is a master of merging form and function. Forging a
cinematic language all his own, fresh for each film, exactly calibrated
to best express his narratives. Form as function. This has been true
at least since early short “Carne”, executed in a series of rapid
chopping motions, and certainly was in evidence in the insatiable
backwards pull of Irreversible. In Enter the Void, his
technique is entirely turned to submerging the audience in Oscar's
experience. Which, heightened by drugs, stress, and soon even more drastic
states, tends to be incredibly vivid. And all the same, all too grittily real, in a way.
This is Gaspar Noé after all.

His plot here is deceptively simple, a tightly-controlled character
study with a minimum of obvious plot motions so as to feel almost free-form. (Don't be fooled — I suspect each detail is well in its place).
Oscar is an aimless expat in Tokyo — taking in the lights, dabbling in
drug deals, leafing through the Tibetan Book of the Dead, devoted to his
sister Linda, his only close relative following the deaths of their
parents as children. Early on, Linda warns Oscar about getting involved
with junkies, just before he drags us with him into a DMT trip (in a
gorgeous sequence of feathered forms that are nonetheless among the less
interesting visual effects of the film). And then he's off into the
neon night to deliver half his stash to a friend. Despite this, Enter
the Void is much less about drugs than about that major preoccupation of
20th century psychoanalysis: the eternal desire of the Son for a return
to the Mother. Which, sure, we've seen before. But not like this. Not
like this.

To say anything more detailed in regards to a film so completely
designed to be experienced would only lessen its impact. Though it may
have impact to spare. It's not a film that is likely to be accused of
over-subtlety or restraint, again unsurprising for Noé's high impact —
and unforgettable — approach. But Enter the Void sees his
visceral filmmaking tempered by more moments of beauty. Of reflective
calm. The film feels like the roller-coaster glimpsed in one memory, but
it is equally harrowing and exhilarating, the net sensation of a life,
perhaps. So that afterwards, after 150 minutes sharing Oscar's visions,
you may find yourself wanting to linger, to revisit in spite of
everything, already being drawn back, back, and into
THE VOID