Giving us the honest truth 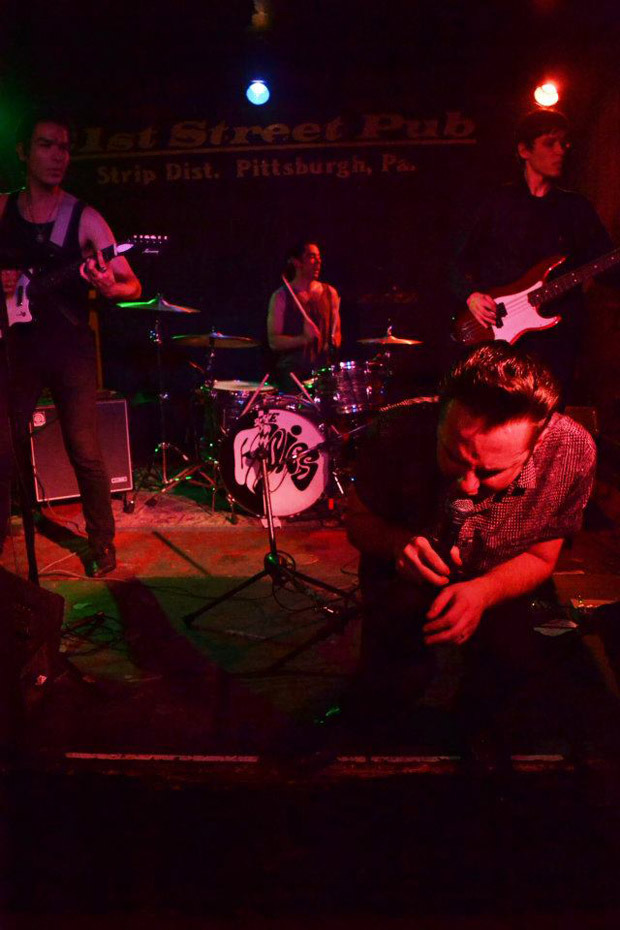 “The whole retro thing is cool, but you have to understand – rock 'n' roll, country, and punk have all been borrowed. It's all gone through the gamut and there are just new incarnations of it. If you want to start an avant-garde band then go fucking do that… But, if you like rock 'n' roll then just put your own spin on it and you'll be free.”

It is in Toronto, Ontario that the convergence of the grit of the Detroit scene, the manic panic of the San Fran psych scene, the twang of the Southern scene, and the eeriness of the French scene have come together over “dudes getting drunk and stoned recording shit thinking it’s a joke.” While Pow Wows have a sound embedded in the tried and true style of rock 'n' roll, it's how they've seamlessly melded the panache of contemporaries and early adopters into a style that has both fans and critics looking north of the border for what's next in the evolution of DIY rock.

According to native Canuck, King Khan, on their self-produced debut Nightmare Soda Pow Wows “gloriously carry the flower-punk torch and continue in our debaucherous death cult tradition.” High praise, and for good reason – although the flower-punk sash is more of an adornment than a religion. It's a sound that provokes gallivanting beyond hedonistic salubrity. The kind of mischief that results in the form of lush ambivalence, the daily shakes, consistent trips to the free clinic, a boost in the black-market drug trade, yellow teeth, bad breath, diarrhea, paranoia, and one hell of a record collection. This is an ethos I’m not confident is embodied by Pow Wows’ members, but one that could certainly be ascertained through their variety of shit-hot garage.

“Honestly, I think that this band wouldn't exist if it wasn't for Get Hip getting behind us,” said MacGrewver following the show.

The majority of the half-capacity crowd adorned with mostly black leather jackets, selvedge jeans, and hair styles reminiscent of Elvis' iconic coif were in attendance to see Pittsburgh garage stalwarts the Cynics. Get Hip founder and Cynics guitarist, Gregg Kostelich, discovered his label's latest darlings during a show at Toronto's Mitzi's Sister (now the Sister) over a year ago.

“It was our second show as a band,” said Beaudelaire. “We had this tape. We gave the Cynics a copy of the tape, and then, that was it. We went on, and maybe three or four months later they contacted us saying they wanted to make it an LP. We were like, 'really?'”

At first, Kostelich and Barbara Garcia-Bernardo, co-head of Get Hip, only wanted to issue a 7-inch single, but, after spending more time with the cassette, the two decided to master what was already recorded into Nightmare Soda. Their only changes as far as content were adding the numbers “Know Her Name” and “Plastic Factory,” as well as removing the blistering cassette closer “Riding Down The Tracks” which is a Captain Beefheart cover. “We committed copyright infringement,” said Beaudelaire.

The recording that would become Soda was built around a series of sessions in a couple different practice spaces dictated by work schedules and the abilities of a Zoom MRS1608 digital interface. The original lineup – Beaudelaire, MacGrewver, Shite, and another Jay whose last named went unspoken by the band – was only fully present for the recordings of “EIO (During the Flood)” and “Pandemic 44.” At the time, Pow Wows was just a collaborative project, not a focus, which served advantageous for these sessions.

“The rest of the record consists of lineup mixes of Siam Cat and Godzillas. It wasn’t meant to be a record, none of this was meant to be an album. It was just that we were in the space, fucking around,” explained Beaudelaire. “Here’s a song. We recorded a song. We’d do that. Then there would be days when I wouldn’t be there, and there were days where he [Shite] wouldn’t be there and it would get recorded.”

How many bands receive a 180-gram vinyl pressing for work they didn't intend to even properly release? Not a lot. For recording the distorted layers of vocals, guitars, bass and drums Beaudelaire said it was all about “mic placement.” Either way, the inexpensive method contributed towards their timeless sound. A sound that seeks an audience not by recording capacity but by product. “We just kind of write our own songs and then record it in a lo-fi quality. Digitally. The recorder we have might as well be a tape machine. But, that's the beauty of the technology. The only thing different is the ease. The actual sound quality is achieved by the mics being used. If we went to a proper studio, they would laugh at the methods that we use.”

Ultimately, the decision to release an LP with Get Hip prompted the boys to make, what they considered, necessary changes to their lineup in order to become a proper recording and touring act. Pow Wows' original lead guitarist, the other 'Jay,' was asked to step aside. A couple of weeks before the show, Juarez Laredo was asked to step into the role of lead guitarist for the tour.

“Once Get Hip got involved, that was when it came to a point that it was like, 'ok, maybe this can be an actual band,' because it was literally not a real band. Once we tried to take it as a real band, there was a point where we had to get rid of a member because it was this fractured thing and that’s when Juarez Laredo entered the picture. Not that we’re like 'serious,'” said MacGrewver. “I was more concerned with being able to deal with an asshole as a bandmate. We wouldn't have wanted to do these shows with The Cynics in these five or six cities. We wouldn't want to do these shows with the previous band,” he added.

During their set, the Toronto gang wheeled out renditions of Soda numbers “EIO”, “Seeing Black“, and “Worry… Don't” which captured the essence of what made the album so exciting:

Beaudelaire's guttural vocals, Shite 's heavy-handed strums, the solid pace of MacGrewver's skins, and the delayed twang and fuzz of the lead played Juarez. As raucous as there sound is, live and in studio, ugh, practice space, they would prefer not to be placed in any bracket of rock 'n' roll.

MacGrewver expressed a cynical disposition to the modern state of rock 'n' roll that didn't sit well with the rest of the band.

“What the fuck are you talking about? It's not dead!” shouted the rest of the band at MacGrewver.

“I'm not into that kind of music,” said MacGrewver. “I don't listen to garage rock on my own. I listen to fuckin' acid house and drum machine kind of music, and that's how I try to play drums.” I guess it's safe to assume he's not the one playing tambourine on Soda's closer “Plastic Factory.”

Thus far, Pow Wows have enacted their sense of rock ‘n’ roll elementals, and an aptitude for the delay pedal, into a rousing DIY venture which, in attitude and execution, bleeds passion over intention. “There's an aspect of old school rock 'n' roll, though I don’t feel like we're necessarily that sound. But, somewhat in the aesthetic but more so in the delivery. It's an honest thing we are doing. We're not doing something punky. We want to bang out the songs on our instruments and see what happens. Every night [of practice] is jamming our tunes and seeing how they go,” said Shite.

Recently the boys debuted the video to the A-side of the follow up single to their debut “Killing Me“. The 7” release will be available upon their return to the states for the Get Hip SXSW showcase featuring Paul Collins and Peter Case, The Ugly Beats, The Higher Stte, Authorities, The Ripe, and Nervebreakers at the Easy Tiger Patio this Saturday.

If you're one of the lucky bastards down in Austin this week, catch them somewhere if not the showcase and tell 'em “Impose” sent you.