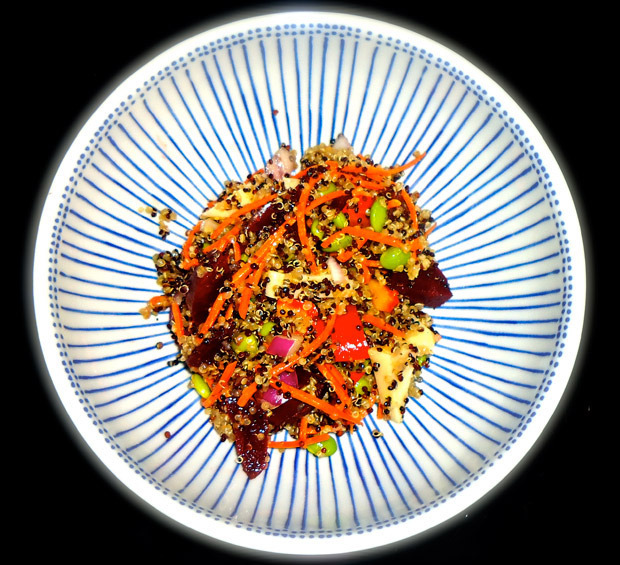 Have you guys ever been to LA? The City of Angels? The land of good vibes and chilling out? I'm living here while Prince Rama is recording a new album with Tim Koh from Ariel Pink's Haunted Graffitti. It's a crazZzy world out here! Everything is colorful and alive! People drive everywhere! There are so many plants growing all over the place! I live in New York where everything is grey, we all cram into subways and busses, and live in warehouses where nothing can grow but mold!!!! But I still love New York. It's the greatest city ever made. But LA…this is where I want to live when I hit 30 and realize “Oh shit, I'm an adult.” Or maybe when I realize “Oh shit, I love sunshine.” Or “Oh shit, I'm broke.”

It's been very inspiring out here for many reasons. One of them being food. I had never heard of “Micro-Greens” or “Fiddle Heads” before coming to LA. People are mad health-conscious. I've been learning about how to drink tea instead of coffee, how to eat fake-out ice cream called “Superfood Kreme”, how to eat breakfast at 2pm when everyone else here starts their day, and how to casually drink out of a coconut and pretend like it's an everyday thing for me and not the most exciting beverage EVER. Being healthy is HUGE out here, so I was inspired to really put the LA in saLAd and make this good vibes Quinoa Salad with Ginger and Honey Dressing.

Let's get the Quinoa going. Man, what even is Quinoa? It looks like cous cous with a tail. I guess it can be a rice substitute but I don't know anyone who is allergic to rice. Boil 2 cups of water with Black Pepper, Dill, Cayenne and Salt for flavor. I also snuck in some Olive Oil so the Quinoa kernels (kernels?) don't all stick together. After 10-15 minutes (or when all of the water is absorbed) remove Quinoa and set aside in a large bowl to cool off.

While that's cooling off we can get to chopping! Chop the Onion, Red Bell Pepper and Beets. I cheated and bought my Carrots already shredded and my Edamame already shelled. I'm really not a big fan of prep work, but I've been staying in a very adult house with a beautiful kitchen so I figured out how to make the prep work FUN by pouring myself a glass of Rye and exercising my “Art School” “skills”:

“The Art of Preparation”

Look at those pretty colors. California is so CoLoRfuL! The people wear bright colors and patterns, the buildings are painted in extraordinary ways… I remember playing a show here last fall and walking around to kill some time before sound check. I was wearing a zebra print jumpsuit and bright pink lipstick (my usual show attire) thinking 'Man I'll fit right in here!! I look SsSOoOOoOOoOOoOOoOOOo CALI right now!!!' I was crossing the street and ahead of me were 3 people – 2 girls and a guy – sitting at a table drinking tea. As I crossed, all three of them were blatently staring at me. 'Wait a minute,' I frantically thought to myself. 'I'm supposed to be blending in. Do I like, have something in my teeth?!! Does my hair look okay?!! Did my jumpsuit rip in a SuPeR unfortunate place?!! Is my THONG hangin' out!!?!!!?!!! Are my bOObz exxxposed?!! ARE THEY TOTAL ASSHOLES?????' I quickly decided the latter was true and called them out on it.

I threw up a sassy eye-brow and pursed my lips at them.

Them: “We were just saying how beautiful you look in that outfit.”

So this dressing is super tasty. Combine the Olive Oil, Braggs, and Rice Wine Vinegar. Next add the Honey and stir it a lot to make sure it isn't just chillin' in a clump down at the bottom. Last, add the Ginger Juice and Mustard. You can taste a little bit and see if you want more of anything! Maybe you like things sPiCieR?! Or maybe more mellow? Maybe Braggs seems pretentious to you so you use Soy Sauce instead? Where do you buy Ginger Juice? Can you juice Edamame beans?!! Why doesn't my kitchen at home have all of these fancy little dishwarez?!?! More Rye please!!!!!!

By this time, the Quinoa should have cooled down. Throw all of the Veggies into the bowl of Quinoa EXCEPT the Beets. Beets make everything look bloody. We'll save them for last. I also chopped up some Raw Cheddar Cheese for mine (because we all know how much I love dairy products) that will be added with the Beets. Pour allllmmmooooossssttt all of the dressing in and lightly toss.

This looks so delicious but it's not finished yet!!! It's got to refrigerate for at least an hour. Check out my web of Saran wrap – I'm so bad at this.

What do I do with my time?!! I slaved away at all of this chopping and preparing and now I have to WAIT an hour before eating my saLAd?!! I was munching on this the entire time I was making it… It's a wonder any of the food was left!! I didn't feel guilty though. This is probably the healthiest most LA thing I've ever made. I wonder if I could ever move here…. Can I deal with having a car?! Could I handle being Traffucked every single day?! Would I have to become a deaLer!?! Would I meet my Mr. Right while surfing on the SAME WAVE?!!! Could we have 2 Sex on the Beaches please?!! Straight Up with SwiZZle Sticks?! OMG would I run into CELEBZ?!!?!! I THINK LA FITNESS STARTED HERE!!!

OKAY LET'S FINISH. Take out the Quinoa salad and add the Beets, the Cheese, and the rest of the dressing. Lightly toss and serve.

Ahhhhhhhh the colors are so bold and wild. Looks like it'll fit right in here!! This calls for a tea-infused cocktail, Superfood Kreme and good vibes!!!!!