No.1 An Interview with Domo chef Ryo Sakai 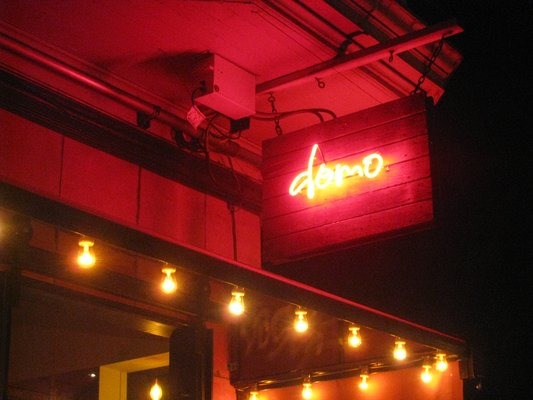 I recently sat down with Ryo Sakai over some soy-egg oxtail ramen, a bowl of braised tripe (aka shit I can't generally order when the lady is around), and a couple pitchers of Sapporo at a Mission-area restaurant called Nombe. Ryo is head chef at Domo, a 20 seat-max sushi-leaning Japanese restaurant in the Hayes Valley area of San Francisco–a spot he inherited from the prior chef Kuo Hwa Chuang — a friend who he had worked with previously. Three years and two consecutive Michelin Bib Gourmand recommendations later, Ryo — a mild-mannered thrillseeker who actually spends his free time skydiving (no joke, AND he's many jumps removed from that tandem beginner bullshit) — broke it down for us about an ingredient that he feels the most strongly about.

Michelin Bib Gourmand two years in a row. That's kind of baller, no?

Haha. I'm pretty surprised. Our check averages fit that criteria though so, yeah it makes sense. Sales dipped a little it initially when I took over, but the locals keep coming and ultimately the regulars came back too. Beyond that, being in Hayes Valley, there's just a lot going on too so it attracts people. Other than that though, we don't advertise, we don't do deals, we don't do any press. We have basically Zagat, Michelin, and Yelp and that's been doing pretty well for us.

You're in a neighborhood with a lot of other shit. “Hot spots” like Absinthe and Boxing Room, not to mention other sushi spots like Sebo and O-Toro. Are you cool with that?

It's actually pretty well-balanced. Sebo is expensive, you could easily spend a significant amount per person there. Sure you could splurge for a special occasion, they get all of their fish from Japan, etc etc. But the thing is, if you actually look at what we do beyond the rolls and all that, we also carry a lot of things from Japan too, but at half the price.

Yeah. Let's not really tell too many people about that if that's cool. It can be our little secret.

If you had to choose one ingredient that is the most important to you, what would it be?

Well, I work at a sushi bar so I've gotta go with the rice. My grandparents from my father's side used to own a bar… walking into that bar, helping out there in the back, those are strong memories for me. I just have this nostalgia for being behind a bar I guess. One of the things I enjoy about being in older bars too is that old, alcohol type smell. It's so distinct and brings back so much for me.

And my mother's side of the family, now they made rice in Niigata, Japan. Koshihikari rice to be clear (note — that's the same shit in one of the best Japanese beers out there, Echigo), which is like the best rice basically. I have memories of looking at these 50 kilo bags of rice, written in Japanese characters. I think my love for rice is a mix of both of these experiences.

What makes koshihikari rice so special? Like why is that better than the Uncle Ben's stuff I can get at Safeway?

It's a short-grain rice. So it cooks evenly. A lot of what is used in California is “California Long Grain,” which actually still is a short grain type of rice but a slightly longer version. So if you overcook it, the ends get super soft. If it's shorter rice, it cooks more evenly. The long grain stuff isn't inferior, just harder to cook.

If that's the most important ingredient to you, your assistant chefs have got to be on point when they're making it, yeah?

Definitely. I show them the correct amounts of vinegar, temperatures, all of that stuff. The geographical climate matters too.

Yeah, that makes a difference. Humidity, dryness, etc. That effects the crop, that effects how you are cooking it based on where you are, etc. Cooking rice in San Francisco is different than cooking rice in New York, or Japan, etc. And the water of where you are is a huge factor. Japan has some amazing water, and that is reflected in the quality of the rice. Add those two up also, and you get some amazing sake.

Makes sense. So then how did you actually learn how to cook rice?

A lot of different people. But not from my father actually. Some of his industry friends though, here in San Francisco… Tekka when it used to be an Izakaya, the Hotel Nikko guys. At my first job in San Francisco, at Blowfish, they were very open about letting people learn too, which was cool. But yeah initially, I wanted to do something totally different from my father. I didn't want to be a chef.

I hear you on that for sure. Initially by the way, one of my questions was going to be, “Do you develop specific dishes around this ingredient?” I mean, obviously yes. You make fucking sushi. So on a related note… let's say Domo's rice wasn't on point… how does that affect what you do?

I mean it's kind of hard to mess up the system we have at Domo. It would have to be seriously catastrophic failure of the rice cooker or something for that to happen. I have to say, it's one of the easier things to do. But at the same time, that's also what makes it difficult.

What's the “must-have” dish at Domo featuring that ingredient?

I mean, I get a lot of people who come into Domo looking for rolls. And I slowly over time try to convert them over to nigiri. Because there are so many different varieties of nigiri. But right now if I had to choose one, I'd say the flying fish. People are used to seeing the tobiko all over the menu (aka the flying fish eggs), so it's fun to see customers finally come face to face with the actual fish itself.

That's one of the things I like about Domo, personally. I feel like certain places frown on rolls as being pedestrian or some shit, but I like that you guys use that as an entry point for people, to a lot of other good stuff. Seems like there's a lot of people who are still figuring out that they can get flying fish, multiple kinds of uni, some more obscure Japanese stuff, etc., from Domo.

Yeah. It's just a progression. That's pretty much it.

Is there another chef out there that you think showcases rice in an exceptional way? Like just some rice you had that completely rocked your shit.

Kappo in Seattle, in the Fremont area near Washington University. He had another restaurant downstairs, but upstairs at Kappo he was doing like all omakase (aka chef's choice), $100 a person. His rice was pretty good. He was using the exact same rice as I do, maybe a different rice cooker… but man the water up there is phenomenal. I think that's the one difference that made it so memorable.

Legend has it that there's a hidden loft above the sushi bar at Domo that — say, an important Domo employee could theoretically use to pass out in if he were to consume too much sake. True or false?

Haha. True… but, it no longer exists. The owners maybe thought it wasn't the safest idea… so now it's a storage area with a larger access point underneath. Not really enough room to sleep anymore.

I think their kids climbed up once, and that's kind of what did it.

Goddamn kids. But seriously — and most importantly here — if rice was a musician, what kind of music would it make?

I'm a big video game nerd so the first thing that comes to mind is the Crystal Room Music from Final Fantasy. If you don't know what that is, just look it up online and you'll find it.

Musically speaking, what gets you in the zone when you're cooking?

I'm a big jazz & hip hop person. Seba Jun of the Nujabes was a great mix of the two. Being Japanese-American, I'm drawn to a lot of that kind of stuff. There's another group that I'm into right now as well, but you wouldn't believe me if I told you their name.