Going Back in Time with Melted Toys 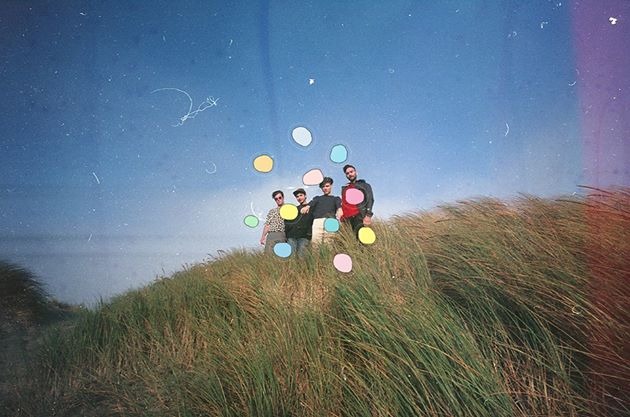 I'm Steven and that's Brian and we put together a YouTube playlist for Selector. For this piece, we went back in time to see which music made a big impression on us when we were writing the songs that would become part of our first album, out July 14 on Underwater Peoples. Starting from our teenage years—when Brian, Daniel and I first met in high school—and finally ending on last year when we finished recording. Here are a few tracks that immediately stick out in our memories that guided and inspired us.

Lambourghini Crystal was a big deal to us in the beginning when we started the band. Before we had a name. I remember Brian, Daniel and I, sitting around the living room, trying to come up with a band name – every single idea we'd tear apart with a joke. We had a show coming up and we really needed a name so I tried channeling Ferraro because I always thought he was really good at conveying an idea or image with his song titles and different project names. At the time I was really into Strawberry Alarm Clock, the Chocolate Wristwatch band, and a bunch of other 60's psych bands like that and I tried to imagine, “what if James Ferraro went back in time to the 60's and he had a band; what would his band be called?” It doesn't have anything to do with our childhoods or being mischief makers. We were good boys. Melted Toys was the only name we were all happy with/made sense and we had a show coming up so we really needed to come up with something.

A couple years ago I was invited to go to Taiwan. While I was there I pretty much almost only listened to old Japanese pop songs. I was obsessed. I still am. Especially with particular songs that kinda almost transcend that era or have a certain light and playful, bittersweet quality. This track by Masayo Kawaguchi is an example of that. Anyway, those songs really inspired me and me helped kick start writing a bunch of new material that ended up on this record when I had no intention in writing.

The Zombies, “Leave Me Be”

I've always known that I have an ambiguous singing voice, like sometimes people mistake me for a girl. In the past I would be at odds with it. I think it was when I first really started listening to Smokey Robinson & The Miracles and The Zombies that I felt validated in a way. Even though my friends have always been encouraging, it was after listening to Colin Blunstone, Smokey, and even Simone sing, it made me feel like I wasn't a freak.

Shoes, “When It Hits”

In high school, the same day Daniel and I first met, we both got suspended from school for smoking in the locker room. Bored and not much to do at home, we'd meet up and take the bus around town. One time we ended up at the mall with no money to take the bus back home, so we waited for Daniel's mom to pick us up and we both had our CD/FM/AM players listening to this college radio station we'd usually listen to. That was the first time we heard Shoes. We couldn't believe how perfect a band could sound. We ended up calling the station asking them to play more, and they played a couple more songs. I remember us sitting quietly rocking out on a bench in the mall listening to this awesome new band.

Our friend Tamaryn introduced us to Jimi Hey when we did a jaunt down the Southern California. Jimi was Djing our gig, and I knew I liked Jimi when he played an Apple Boutique track right after our set at The Echo. Basically, Jimi has encyclopedia-like knowledge of the deepest cuts. The next time we played a show, Jimi came and brought me a mix CD with a bunch of bands I had never heard of. The CD contained pure pop gems he knew I would find special, and this song was on there. Sensations Fix are still kind of a mystery to me, but the structure of this song is very familiar now. When I was writing bass for the songs on this record, I'd try to find a similar vibe that this song has.

I discovered this track on YouTube when I was going through an early house and jungle phase. In retrospect, this song is getting to the head-space of what we would do sometimes for the drums on this LP. Although electronic music is big for us, I don't think it directly influenced what we did for this album, but we sometimes would take ideas from it when we wrote drums. It's hard for me to not want to dance to house music, and also this song makes me envious of 90s raver culture. I just think this is a great “chill out” song, too.

This is probably one of the most powerful songs for me in the past couple of years. For me this song will be always be in rotation—the first time I heard it, it hit me like a drug, “Ahhhhhh ahhhhh ah ahhh,” when the softly overdubbed vocals kick in. It's also a kind of a slow burner. During the early stages of making this album, Teenage Fanclub was the only cassette tape in my van for at least a month. The song’s break down, or the very extended outro, is a perfect example of how dynamic changes can really make a song. I think it’s one of the best songs ever written, in my opinion. Norman Blake’s vocals reminds me of Steven’s—I’d like to think I contributed to this subconscious effort.

The influence of this particular song is more indirect then the others. When we finished recording the LP, we realized we needed somebody to properly mix it because every song sounded really different from each other. So we got a chance to work with Rusty, who produced Person Pitch — which was really cool. I love the music—but really what I like—and what I am attached to is the incredible soundscape that Noah Lennox and Rusty created. In a hundred years, people will listen to this album and say, “how did these primitives do this?”