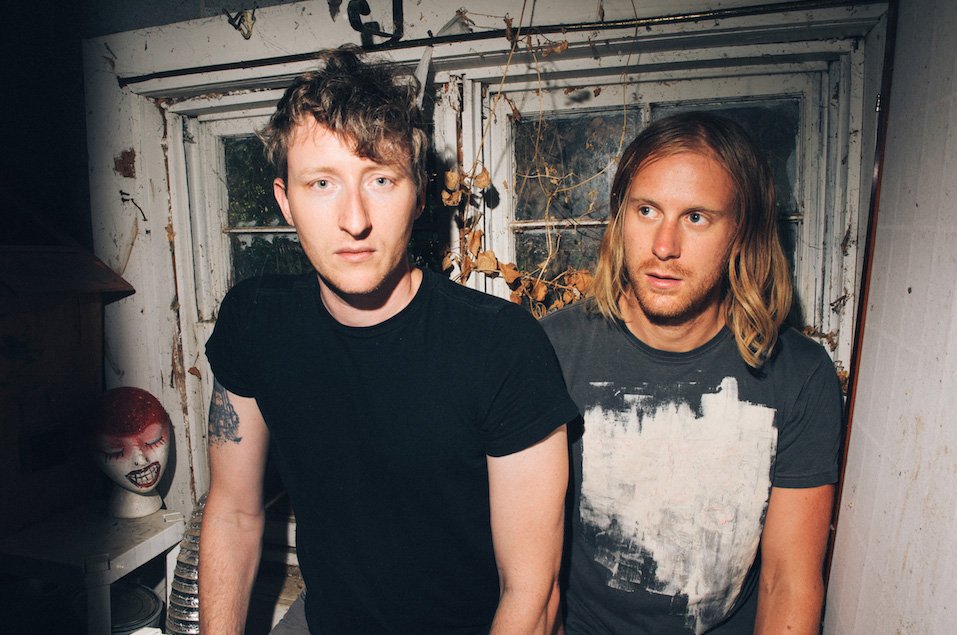 Ahleuchatistas’ music typically comes packaged with suffixes like “math” and “prog,” which depending on your disposition signal dazzling virtuosity or insufferable self-involvement, but the duo composed of Shane Parish and Ryan Oslance elide both dead-ends on Arrebato, their first album since 2012.

Inspired in part by the group’s travels through Spain and the greater Iberian Peninsula, Arrebato registers as globetrotting but not touristic, with skittish percussion and counterintuitive turnarounds that retain propulsion and the impression of seamlessness. Meanwhile, guitar and keys and considered post-production lend texture and tectonic might. Arrebato would contain some of the heaviest instrumental statements in recent memory if they weren’t undercut by such beautiful thickets of haze and melody. “Power With”, premiering here, typifies Arrebato’s rather elemental evocations, as does the album’s promotional video.

Ahleuchatistas originally formed in 2002 in Asheville, North Carolina. Named after a bit of Charlie Parker scat and the Zapatistas, they boast titles on a host of reputable left-field labels, including Cuneiform and John Zorn’s Tzadik. Arrebato is due from the formidable, upstart Chicago label International Anthem on October 30. Below, the band members reflect on their affinity for Spain, post-production, and the populist conceit of the song title “Power With”.

I understand Arrebato was inspired in part by traveling in Iberian Peninsula. Can you tell me more about the trip and how it bore on this music?

Over the years we have developed a close kinship with some DIY communities in Spain, and we feel very lucky when we can return and perform and visit with friends. Last year we were in the process of writing this new music while on tour there, performing and problem-solving the songs live and actually composing during our drives, using the composition app Notion. We both feel a strong attraction to this part of the world for various reasons: the sweeping vistas, the collectivist spirit, the story and principles of Don Quixote, Orwell’s writings about the Spanish civil war, Flamenco music, the guitar music of Tarrega and Sanz, the winding streets of Barcelona, the incredible people we have met. This epic nostalgia makes its way into our music, because our music is who we are.

Can you tell me about the drawbacks and advantages to breaking apart the recording process? Is there a fear of losing live feel, or just excitement about the possibilities of the studio?

Once we have recordings of solid drum performances and the skeleton of the guitar parts down in the studio, we can then add the layers of melody and texture. It makes for a better production, rather than just recording all the loops live. Our producer on this record, David Allen, made it his mission to finally capture the intensity of our live show on a studio album. We are very grateful for his expertise and dedication to realizing this production. The fact that we could do all the post-production remotely, at home, made it possible to enter into an entirely new phase of composition with this collection of tunes. Sections that were loosely performed the same way at every show became much more elaborate and cohesive in the month-or-so-long post-production process on Arrebato. Once we finished tracking and began mixing, I had to go back and learn all the new parts I had written for the record. Then we rehearsed it with this much clearer map, so we could pull it off live. And now the music is evolving even more because of the new possibilities this presents to the live situation. We always maintain an improvisational element so the music is fresh and spontaneous, even if we follow the same map and play the same songs every night.

How do you see “Power With”, in the context of the album? Is there an idea underpinning the song, indicated at all by the title?

It is the percussive opener to side B, and it signals the album’s gradual shift into more abstract and fluid musical territory. The title is about creatively working together to better our lives and world, and shedding the rat race mentality of “power over” which has driven so many of the problems we face.