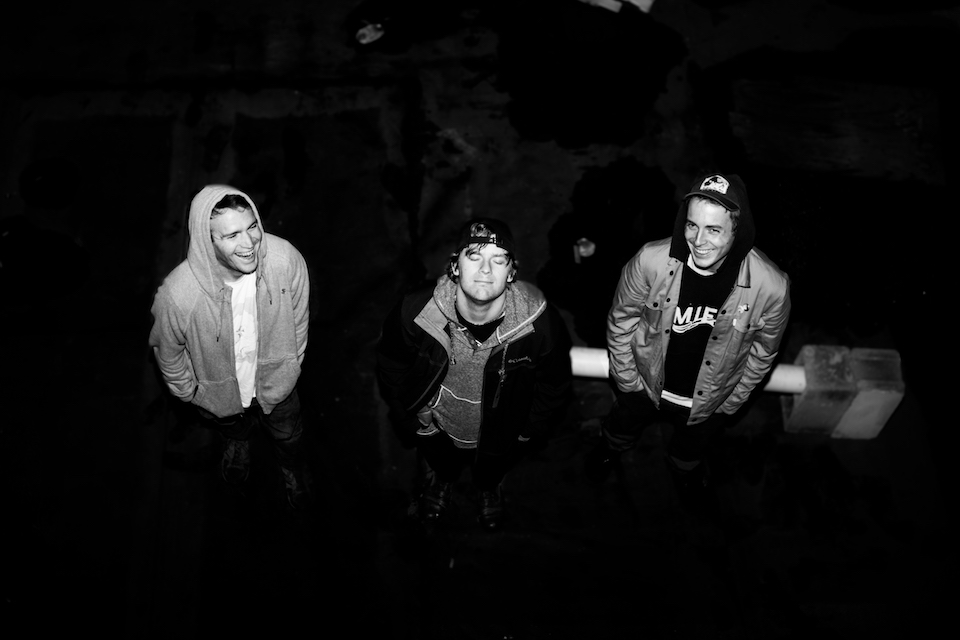 On March 3rd, Buffalo, New York’s alt collective Del Paxton – comprised of Dylan England, Greg McClure, and Zack Shoedel – releases their debut album, titled All Day, Every Day, All Night. The eleven track work winds through upbeat melodies, succinct, clean beats, and striking, crisp sounds as it provides comfort in the uncertainty. From tracks like “My Other” – which highlight the feeling of being lost physically – to feelings of nervousness in “Loose Leaf” and confusion in “In The Well”, this album is something everyone can find a nugget of their own truth in. Perhaps that’s why the title of the work is so relatable, as our seemingly non-stop grind continues.

Check out our quick intro interview with the band’s own Zack Schoedel below!
What’s your official origin story?
Zack: In the beginning, God created the heaven and the earth (Genesis 1:1) Eventually, three dudes who had known one another from playing in / touring with previous bands would happen to find themselves living in Buffalo, NY and neither of these dudes were playing in a band. Each of these dudes wished to continue playing in a band, so circumstance would have it that the formation of Del Paxton took shape quite naturally. This all happened in the year of our lord, 2013 AD. So here they are four years later having a good old time with it! (I was going to end this answer with the final passage of the book of Revelations to bring it full circle, but I think it’s a little heavy for this interview). Thus is the Del Paxton creation myth.
With the release of your debut album, what is it you hope listeners get from your music?
Zack: For the most part, we write relatively straightforward pop songs that are pretty hooky and riff-heavy. We play around with odd time signatures, mixed meter, and we try to put an emphasis on syncopation in the writing process. Not a whole lot of genre bending going on with these songs. But I think there is enough overall sonic variety happening on this record to remain engaging throughout.
What’s special about All Day, Every Day, All Night?
Zack: The time we spent recording this LP made a powerful impression in my memory. It’s a sad story: literally the day before we went in to begin tracking, one of our closest friends passed away as the result of an overdose. On one hand, it felt like an impossible task to go in and begin working on a record in the immediate aftermath of that happening, but we all knew he wouldn’t have wanted us to cancel/postpone the recording plans, so we went ahead pulled 12-18 hour days in the studio for exactly 7 days. This LP is the final product of a considerable amount of mental and emotional labor. For me, listening to this record is like entering a time portal back to January 1-7, 2016.
How do you stay inspired to continually create music?
Zack: It comes very naturally for us, I think. We all love playing and writing music so much. Based on taste, experience, and background, I think we’re just the right combination of people to be working together. But beyond that, it’s just a fulfilling and therapeutic activity we all enjoy doing together.
I’ve being seeing more & more Buffalo groups getting press lately. What’s the music scene like there?
Zack: Buffalo is a great music city, generally speaking. There are always shows of one kind or another happening every night of the week. It’s like Nashville or New Orleans but not nearly as good as either of those places. Buffalo is more nationally recognized for its hardcore and like – real punk bands. There aren’t a whole lot of bands in Buffalo that are very generically similar to us, but that makes for more mixed bill shows, which I’m a huge fan of.
Being a musician in the modern era carries a lot of uncertainty and financial risk. What’s been most challenging so far?
Zack: Lol, it seems just being an average, non wealthy person in the modern era carries with it a lot of financial uncertainty. But yes, especially so for musicians. There are plenty of expenses involved with just playing in an active band that seem to be increasingly more difficult to offset: little things like rent for the practice space, gas to get to and from places, strings, drum heads, etc. Something that is really helpful is simply when people pay for music. Given that not paying for music is always an option in today’s music industry, people consciously supporting music by paying for it means a lot and goes a long way.
Where are you most comfortable as an artist? On stage, in the studio, on the road or somewhere else?
Zack: Where I’m personally most comfortable is in the practice space, working on new material. That’s probably just because the vast majority of time I spend being a musician is spent there, doing just that. There isn’t a whole lot to remark on about being comfortable, though. I love playing on stage for other people, and being in the studio is always a treat, although it comes with its own set of pressures and anxieties.
Anything else you’d like to let the readers of Impose Magazine know?
Zack: Thank you taking the time to do this with us! It’s exciting to finally be able to share this record with everyone. We’ll be playing SXSW at the Topshelf Records showcase on 3/16 at Cheer Up Charlies, so come hang out with us there if you’ll be at the festival. The Polyvinyl Records showcase will be happening simultaneously at the outdoor section of the venue, so there will be a lot of great stuff to see between those two showcases. Thanks for listening and supporting music!
___
All Day, Every Day, All Night is out March 3rd. It is available for preorder now, with a portion of the proceeds going to The Trevor Project, The NAACP Legal Defense Fund, and Planned Parenthood. Keep up with Del Paxton here.