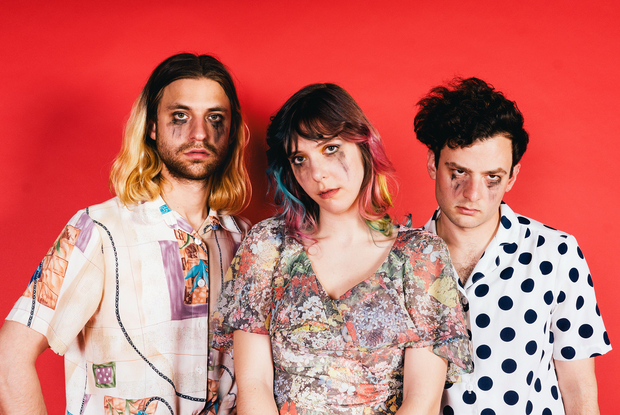 Seattle garage rockers Dude York are one of the most exciting and charismatic rising bands in the game. Their rollicking, poignant take on ’90s-era lo-fi rock and crunchy pop-punk is both charming and refreshingly honest, and their live shows are straight-up giddy fun. We were also huge fans of their last studio album Sincerely. And today, the trio announced its follow-up Falling, and shared its wonderful and searing title track.

“Falling” is full of longing vibes and gorgeously catchy melodies – a heartfelt but realistic portrayal of budding romance. Through her crisp and sincere vocal croon, singer Claire England depicts the scenes of an unfolding love story: sharing cigarettes, watching The Bachelorette, and bonding over childhood music faves. At the same time, there’s pangs of melancholy coursing throughout the song – the sobering realization that falling in love is a more complicated and balanced process than the intensely romanticized ideal portrayed in the media and beyond. The chorus is particularly relatable, as England concedes that she “secretly hoped, when it happened to me, there would be no doubt, it would feel like falling.”

Overall, it’s a beautiful track with soaring power chords and pulsating drums, and another triumph for Dude York. Falling arrives on July 26 via Hardly Art. You can pre-0rder that album HERE, and watch the ultra-cute, Nick Shively-directed animated video for “Falling” below.