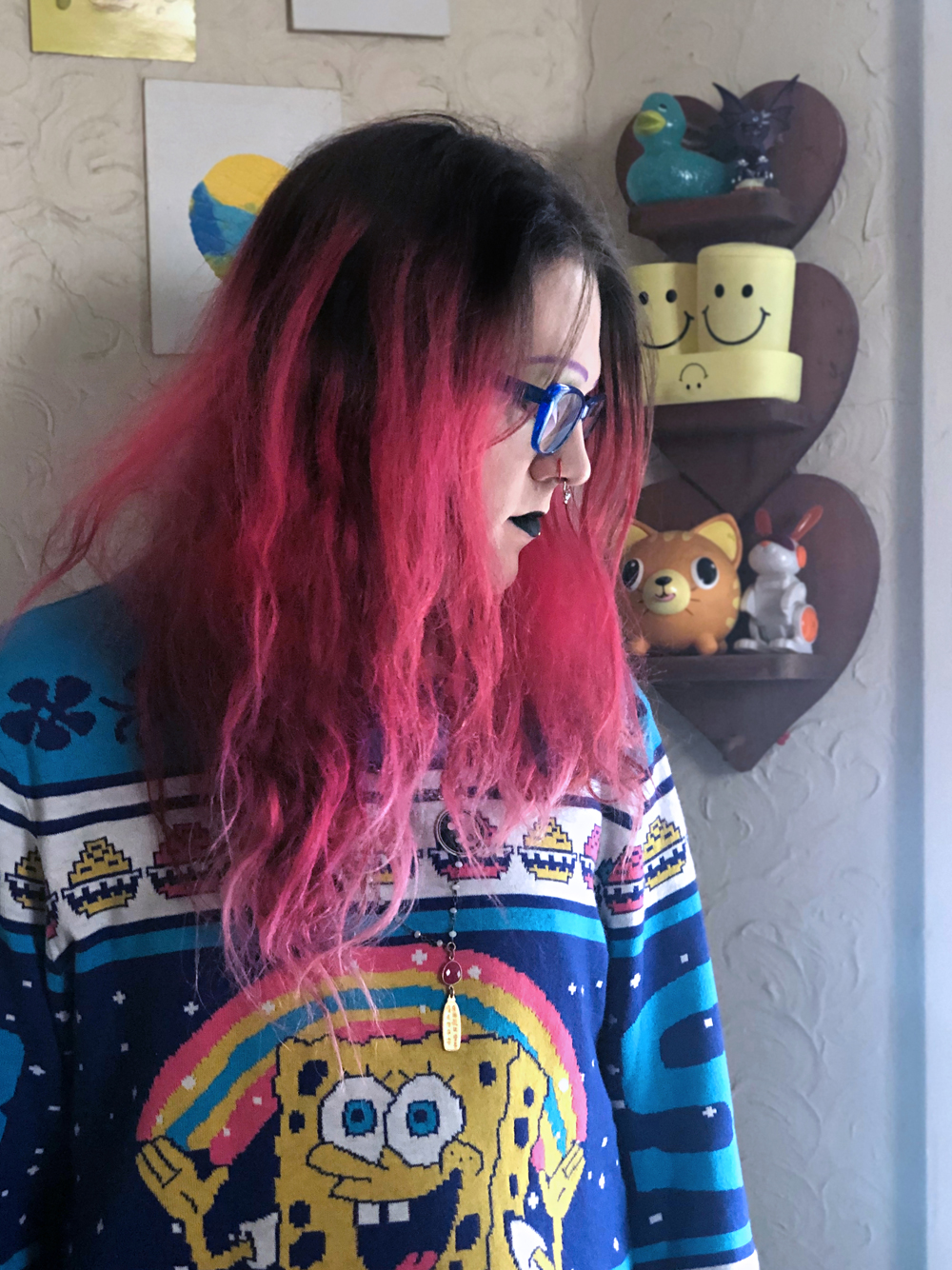 In the last couple years, we’ve become big fans of Chicago-based avant-electronic producer Angel Marcloid aka Fire-Toolz, who crafts a bombastic sonic cocktail that encompasses elements of vaporwave, industrial, metal, jazz fusion, and drone. Earlier this year we shared the eye-popping video for her latest track “Rainbow Bridge” – which is also the title of her forthcoming third LP for Hausu Mountain. That song captured rapid-fire percussion and blood-curdling vocal shrieks amidst a wall of shimmering synths and swelling static, piquing our interest in the new album.

Today we’re thrilled to premiere the lead track and latest taste of that record, the short and savage “Gnosis .•o°Ozing” – along with its frenetic music video. Clocking in at a brisk one minute and ten seconds, the track bursts out of the gate with a cavalcade of shredding metal guitars, haunting screams and machine-gun-quick digital drumming. Juxtaposed with all that madness is a swirl of vibrant, twinkling synths – yielding a composition that is equal parts frenzied and pensive. It’s an imposing intro track that will immediately knock fans off their feet.

“I always put a lot of thought into the first track on an album,” Angel shared with us. “Track one tends to be kind of short across my albums because I want to hurry up and tell the listener as much as I can and move onto the next idea before they’ve put in a good five minutes. An intense, colorful, or extremely diverse short first track is a great way to just jolt the listener, confuse them in an exciting way, and entice them to hang on for dear life.”

Having an intensely imaginative music video to go along also helps with that first impression. Fire-Toolz helmed the clip for “Gnosis .•o°Ozing” with a deft surgical touch. And like many of her past videos, the result is a frantic copy-paste job of random cheap stock imagery, glitched clip-art, primitive animation and other “visual garbage,” as she refers to it. Hindu symbolism and other wondrous visuals dart across the screen at breakneck speeds, highlighting a wide array of often contradictory motifs, from themes like nature, relaxation and sentience to death, grief and loss. For Fire-Toolz, its an exercise in perspective.

“I’m into the realm of seeming contradictions that are essentially just different reflections of the same exact thing filtered through different lenses,” Angel shared. “That is the nature of life, of spirituality, and of my work.”

For her upcoming LP Rainbow Bridge, Fire-Toolz will explore a diverse palette of ’80s and ’90s new age and jazz fusion soundscapes, with a dash of her signature “perceived aggression.” That also means more screaming and shrieking, heavier guitars, and increased sonic dissonance than ever before. Calming, calculated chaos through and through.

“It’s emotional and fantasy-like,” she says. “Somehow the whole thing really gives me this overarching vibe of sitting on a rainbow in the clouds being warmed by the sun while snow falls all around me. As far as subject matter, there is just as much joy as there is grief, and there’s also a lot of questioning. A lot of ideas that are often expressed conclusively are re-worded as questions and ponderings on this album. There is a bit of reaching for healing.”

Rainbow Bridge arrives on May 8 via Hausu Mountain. When that drops we’ll be sure to bring you further coverage. In the meantime, you can pre-order the album HERE, and watch the transfixing video for “Gnosis .•o°Ozing” below.