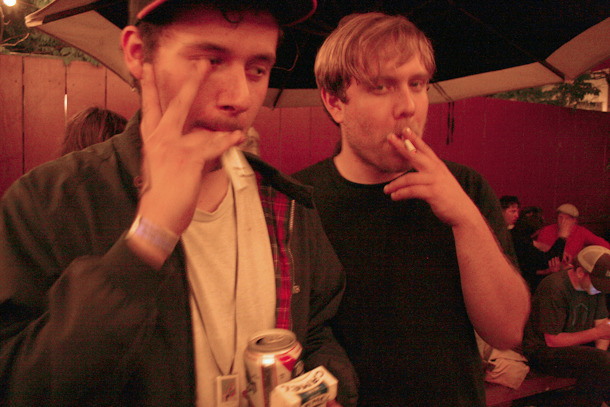 Having caught the name ‘Holy Wave’ on the Austin Psych Fest lineup last year, I later found myself taken aback by the 5-piece Austin band's debut album, Knife Hits. Serving up 10 tracks of harmonic fuzz and psych-rock gravity, the album also juxtaposes a dash of surf pop alongside a zing of melancholic post punk for good measure.

So after participating in a music compilation I put together last year, they touched base about a Brooklyn tour date in late May, post-their follow-up release, The Evil Has Landed. Shell-shocked about joining forces with the real world on the last day of finals, I'd showed up extremely late and caught them packing up their late ’80s model Chevy Astrovan tour bus derivative outside of Bar Matchless. Their set was over. Knowing that the kids weren’t from around town I offered up my living room floor for sleep, and shower for the tour grime.

With all 5 band members and their visual projectionist in tow, I tagged along a band-guided tour of Manhattan the following day, catching glimpses of the tavern where Dylan Thomas drank just prior to his death and the lobby of the Chelsea Hotel, among other places. As we traipsed down a residential street some blocks away from Union Square, there was a fascination with rent.

“How much do people on this street pay?” front man Kyle Hager asked.

“The thing about having lots of money, is that it holds no value,” said Hager.

“We saved up at our day jobs throughout the whole year to be able to do this tour. And it’s so great. I guess if we had more money we could hire someone to lug around our equipment for us and drive a nice tour bus. But I like it this way.”

Holy Wave released the Evil Hits cassette on Burger Records/Reverberation Appreciation Society this month and is in the middle of a nationwide tour converging at CMJ this year. Stream “Albuquerque Freakout” off the new cassette, and help them sort out some of their upcoming band tour dates below.