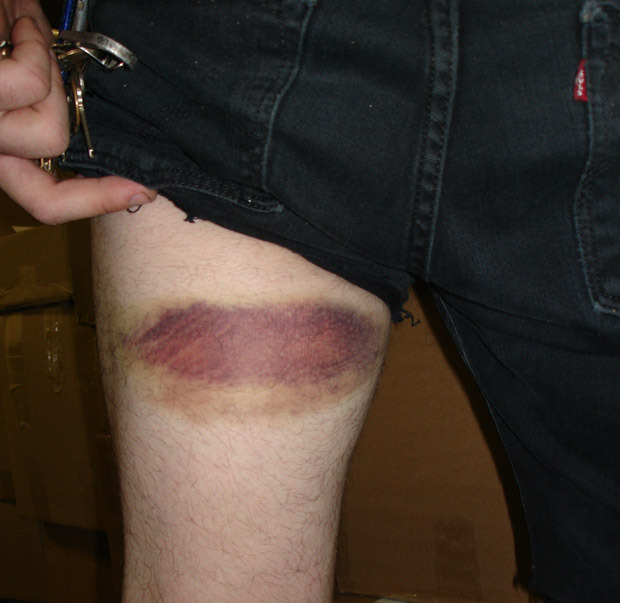 Maryland Death Fest brings out the sort of behavior that causes you to question the true nature of people you tend to think of as responsible adults. Within a few hours of getting into our room, we were threatened with eviction involving a totally harmless nerf gun and unsuspecting hotel employee, regarding which the manager just sighed and said “we were going to evict you, but we’ve just had so many of these incidents this evening that we’ll let it go this time.” Incidents involving toy weapons that 11 year old boys usually wield? Is this really how our weekend is beginning? This is the stuff of treehouse slumber parties, not raging. Raging is the woman in the elevator saying “do you know how many dicks I had to suck to get this t-shirt?” and “my asshole still hurts for this VIP wristband”. I know there are a few other words for that, and I really am bummed out with the idea of this kind of negotiation happening, but I digress. Raging is the girl puking so hard behind our merch table she couldn’t answer a question with more than one coherent word, and I had to let security deal with her instead, only to see her at it again the next day. Raging is out-partying Baltimore, when after all bands have finished, the streets are filled with only you, drug dealers, prostitutes and pimps, and you suddenly realize why the manager thought the eviction threat would be such a scary notion. This is the stuff of MDF that lends itself to memorable and grimy stories, but is only a supplement to the line-up.

I do merch at MDF which only allows me to see fragments of bands playing until after the headliners, during which we usually start shutting down. If I want to see any full set from opening until about 10 PM, I have to request it. This year, the only band before then I was able to see a full set for was Repugnant, and was stoked to have arranged it. The Swedes tend to take over MDF every year. The few other portions here and there that stood out for were Nails, Gravehill, In Solitude, Corrosion Of Conformity, and Doom. I am sure so many others during this time killed it, but I rarely can catch more than a song or two. For full sets, Ghost was my number one, followed closely by Exhumed and Neurosis. Neurosis is a band I would prefer to listen to on my own, and I do not partake in substances that might enhance the live show, but the sudden thunderstorm just beforehand and random lightning strikes during their outside set couldn’t have produced a better atmosphere to see them. Hooded Menace definitely gave their best impending death-doom performance, and while I don’t care for Skinless, I didn’t witness a more aggressive and intense crowd for any other band. From the table, Voivod and Nuclear Assault sounded pretty solid. As they do not have vendors Thursday nights, I missed Tragedy, but I know they would have been at the top of my list of bands who destroyed everyone else. It was probably a good idea to pair them with Cathedral. Any other band closely aligned with Tragedy’s sound playing directly before or after them has a lot to live up to. While also disappointed in missing Cathedral, I heard Lee Dorian’s tight purple shirt and hand claps were in full effect, so I am proud their set was exactly as I imagined.

Unfortunately it ended on an ugly note, with security fighting with fans inside and out of the venue Sunday night. I don’t know what started it, but a weekend of high heat, unrelenting sound, alcohol and drugs collided after Ghost. One of my coworkers was filming the situation and his camera was knocked out of his hand and stolen by security. He was then beaten with nightsticks (the picture above of his leg is only one of his bruises). Determined to get his camera back, he asked security repetitively for it and received numerous vague responses until one finally agreed to help him find it. He did – after it had been soaked in water inside the venue. After a few days of drying it out in rice, he was able to turn it on, only to find that the video had been deleted. I don’t really know what else I can say about this that isn’t totally fucking obvious.

Cohabiting with shady activities and people are also some of the best moments with the best people of the year. There is a genuine desire to have fun, and you can generally assume that if someone is spending that kind of money to be a city where not too much else is going on, they are truly invested in the music. MDF does attract some of the best and worst people – I love it, and always look forward to it, but do expect the best and worst to come out. When you weed out the ugly aspects, you’ve always got one hell of a line-up and performances that get you excited about music over and over again. That’s what it’s all about.

Evan, one of the MDF organizers.