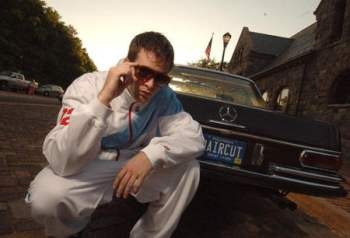 It's been difficult to truly accept Mr. Hawthorne as a legitimate soul brother, but time and time again he impresses with his pipes and ear for sound. Check out the story behind his collaboration with Nottz:

“I met Nottz at Nightlife's Dilla Tribute in L.A. and we just kept in
contact. I had always been a fan of Nottz since the 90s. He sent me a bunch
of beats and at first I had no idea what to do with any of them, but
eventually it hit me. I sang a hook for him on his album as well.

The song is a cover of a cat named Otis Leavill which is one of my all time
fav soul sides, but relatively unknown 45. I don't think Nottz even knew it.
I actually even made up some of the words because no one could make out what
he said in the original. ha!

When Nottz sent me that batch – that particular beat stood out. It had the
same chord progression as the Otis Leville, so I just went with it.”

Mayer proves himself a true student of soul for knowing about this Leavill gem. I'm going to cease criticizing Hawthorne, as there is a good chance he could deliver an incredible R&B album.

Here is the Otis Leavill original:

Scoop the Mayer Hawthorne “I Need You” 12″ at the Stones Throw store.

Mayer Hawthorne, “I Need You”