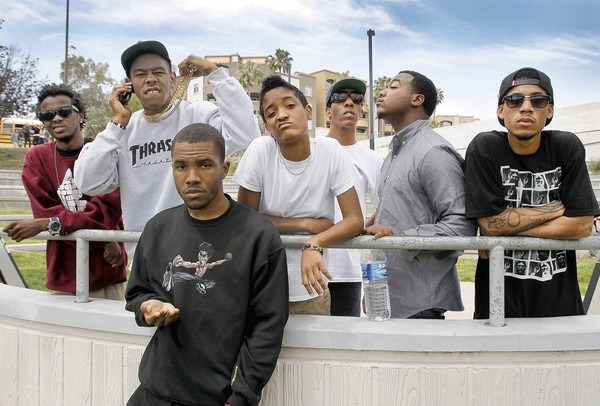 OFWGKTA wants you to wild the fugg out at their shows or the crew will lambast you with criticism. They will call you faggots and pussy ass bloggers until you give them a chaotic mess. They will flail their teenage bodies into your face and break your nose. There will be blood. They will dive from 20 feet up and expect you to catch them. It will hurt you once the adrenaline wears off. But for the love of all that is holy, don't you dare bring them into the riot. It's scary. I mean, come on people. Tyler has asthma, ya'll. One of them almost got hurt.

First reaction to the video:
It is about time Hodgy helped us understand why his moniker includes “Beats” when he doesn't produce a damn thing. He took that kid down. Also, that was some quality homosexual commentary regarding Tyler's physique.

After reading accounts of the Detroit incident:
In the video Hodgy paces back and forth questioning “you bought a ticket to throw glass? What the fuck?” Umm, it's Detroit, the city that pelted The Stooges with bottles in the legendary Metallic K.O. night. I'm not suggesting that OFWGKTA's predeliction for inciting mini-riots is the same as Iggy Pop baiting biker gangs with “you can suck my ass, you biker faggot sissies”. I'm not suggesting that Detroit is depraved (even though it is) and bottle-throwing is just how the D gets down (even though I've witnessed it before, as has Danny Brown). I'm suggesting that perhaps you should not start none if you don't want there to be none, which you clearly don't.

Of course, nobody is trying to take a glass bottle to the face, not even The Stooges in the 70's. That would fugg up your swag, or something. But, this feels like just reciprocity and a chance to learn a valuable lesson in the field of mob mentality. It also looks like a bunch of scared teenagers posturing for no good reason when there's clearly more than plenty of security on hand at the Majestic Theatre to handle the situation. Four songs left in the set, no one injured in the crew and you cannot press play on the laptop? What was the dilemma? No one knew Syd's password to re-open the desktop?

When I wrote my review of OF in SF, I purposely refrained from judging the young performers too closely. At the time the group was possibly only three or four shows deep. But, as OF continues to tour it's time it starts either living up to its punk ethos of not giving a flying-fuck or backs off. The night in SF I recall Tyler losing a shoe or his hat, whatever it was, and he halted the show until it was returned. It left me wondering why a kid who probably gets free shoes and clothes at every tour stop, or could eventually be sponsored by Supreme (if he's not already), would care about one missing shoe. Whether it's a missing shoe or someone nearly getting hurt, it's getting more difficult to believe the nihilism of OF when the crew collectively bitches up over incidents it instigated.

Also, blaming Danny Brown for the incident is comedy. Brown tweeted that he took mali (a non-synthetic ecstacy alternative, basically pure MDMA) before the show. The only way he's throwing a bottle if it was the third one because he was pissed all the fantastic vibrations had stopped. Personally, I think we should explore Brown's suspicion that Jesus or Earl's Mom threw the bottles.