Prince Rama, “Now Is The Time Of Emotion” 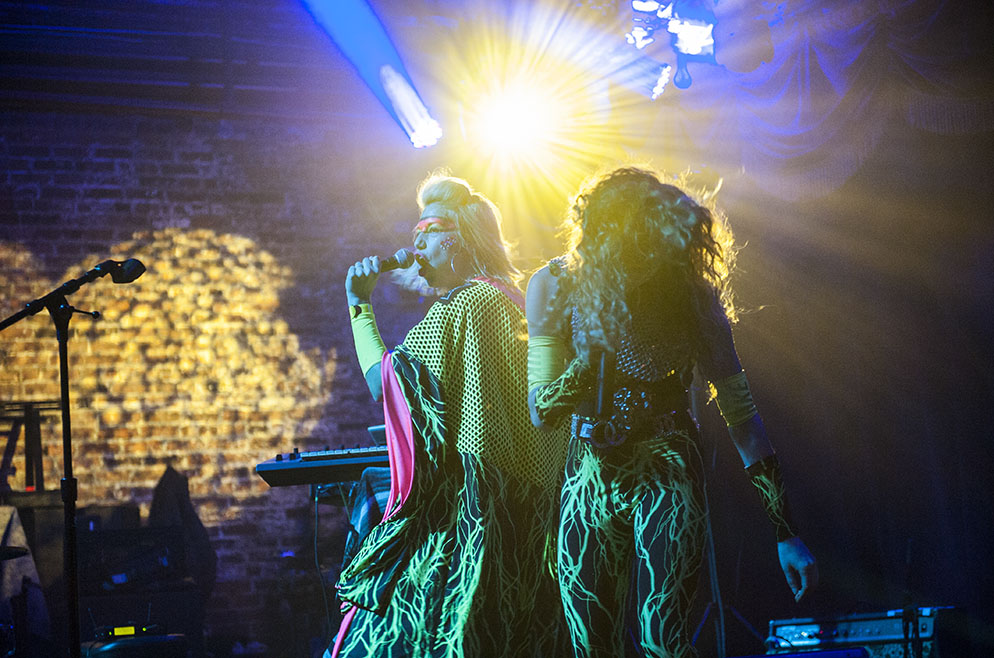 When one first hears the concept for Prince Rama‘s forthcoming record, Xtreme Now—extreme sports fused with medieval imagery, inspired by time spent in a Viking ruin off the coast of Estonia—it might sound a little jumbled or absurd. But sisters Nimai and Taraka Larson have established a precedent of being thoughtful and detailed artists even in their most imaginative flights of fancy, so I was interested to ask them a few questions about the aesthetic and background of Xtreme Now. As expected, our conversation revealed the sisters have well-conceived and creative left-field observations about the “digital dark age” we’re currently living in and how the concept of medieval patronage ties into their conceptual fusion of extreme sports and art; we also discussed David Bowie’s curated death.

Xtreme Now will be released March 4 on Carpark Records. You can stream “Now Is The Time Of Emotion” below, and scroll on for our conversation with Nimai and Taraka.

I know that you’ve done so many beautiful multimedia projects with previous albums and was wondering what’s up your sleeve with this one?

Nimai: Oh, yeah, we’ve got all sorts of stuff. We’re going up to Wassaic, which is this really beautiful little hamlet out there in the Catskills, and we’re going to build a speed art gallery and destroy it. That’ll be our next couple of days, basically.

That’s cool. It definitely fits with the theme of immediacy and destruction and rebirth that’s so crucial for this record. Can you tell me about some of your other upcoming plans—you’re obviously going to tour for this record, what else have you got in the works?

N: Well, we’ve got music videos in the works, and we’re working on a new fashion line, also. We’re going to be collaborating with MessQueen, who designs a lot of our clothing now, and Taraka and I have worked on a few designs that we want to market and have as a collaboration fashion line with her, like Prince Rama x MessQueen. It’s basically inspired by medieval armaments and extreme sports.

Where did you guys come up with that idea?

N: All of the ideas.

All of ‘em. Every one. I know that this album came from the experience of living among castle ruins, right?

T: Kind of. It was a Viking ruin of sorts, we were staying this island off the coast of Estonia called Vormsi, in this pseudo-black-metal utopian commune experiment. And yeah, basically, I kind of just had this – it was a really amazing time culminating in a near-death experience inside one of these Viking ruins where I feel like I kind of experienced the world ending and my life flashing before me and this sort of time-schizophrenia, I guess, is the best way of describing it. I felt like I was existing in multiple times simultaneously. In this case it was the medieval times and the year 2067. It was very surreal. I still haven’t really been able to shake it off; it still occurs frequently, this temporal schizo-state. I had this vision – it was quite fantastic, really. People base jumping out of planes wearing Mona Lisa parachutes, and skate ramps with unicorn tapestries stretched across it, just this idea of the future of art being tied in with extreme sports, like extreme sports sponsoring art museums. I had this sense of experience becoming extremely rapid.

Was there a particular event that precipitated that experience?

T: Good question! Honestly, it was just a weird couple weeks, and I feel like there was definitely some serious spirit shit going on in those ruins. It was a very magical place, and I felt like if you were tapped into it you could receive a lot of information.

N: We kind of thought, too – we got the chance to develop Taraka’s experience when we were asked to do a performance in a 24-hour installation at the Whitney – the old Whitney. So this was early 2013, right after we were spending all that time in Estonia. And we got to further explore some of those visual optics that Taraka was just talking about. We named our installation Whitney Biennial 2067. It was fake-sponsored by Monster Energy, because we were fake-scheming about how in the future, less and less money is going to art, more and more money is going toward extreme sports – the union of extreme sports and art together, in the future, but retaining certain elements of the medieval century, keeping the aesthetic in the medieval century.

That’s sort of like the idea of medieval patronage extended into modern commercialism and how that warps an aesthetic.

T: Yeah! I also just feel like the Dark Ages were fucking extreme. Definitely this idea of glorifying people that dance just at the edge of mortality in the same way that people do in sports now. In the medieval times the equivalent would be jousting or something.

T: Gladiators, yeah. That’s not medieval, but yeah. I feel like there are a lot of ties between the medieval times and now. I feel like we’re almost entering these weird digital dark ages. Very flat, but not in the way Columbus kind of refuted. In a computer screen-flattening kind of way.

And a flattening of our cultural voice, too. I was thinking earlier about how there’s specific voice to a lot of cultural reporting, this sort of Glib Internet Snarky Voice that almost every website has, and individual writers’ voices have sort of ceded before that, and that’s a very digital dark ages concept.

T: It’s interesting hearing you say that from a writer’s point of view. I feel that from a musical standpoint too. I feel like it’s affecting everyone in every creative career.

N: Yeah! It’s all about the first twenty seconds of a song.

Yeah, exactly, the idea that if you don’t hook those eyeballs or those ears immediately, you’re going to totally lose somebody, which is a really scary way to think about people processing art.

T: It’s interesting in the wake of David Bowie’s death to really see that, just the way death is internalized and experienced in mass culture. I found out about his death through Instagram. His official Instagram account had just posted that very minute that he died, and my first reaction was to laugh at it. I didn’t believe it. I thought it was a joke. It was so early on. I Googled David Bowie dying to see if it was real or not, and nobody had posted anything yet. And so I was like “This can’t be true!” As if posting things makes something true. Ghosts start rising from the ground in the form of Instagram feeds and Facebook feeds, “memories” coming up, faces from all eras of David Bowie’s life coming up and scattered in other people’s timelines. It’s a very bizarre way to experience it, for sure.

Yeah. I had a similar experience, I was on Twitter at that moment and saw the official Bowie Twitter post that, and I was like “This has to be a hoax, right? This has to be an album promotional thing, right?” And I was doing the same thing, Googling it and trying to get confirmation from some sort of verifiable source. And when his son posted that it was true, that was what did it for me. Again, a post made it so. Also, there’s the fact that the David Bowie Twitter account’s last follow was an account for God. That’s such a perfectly curated death in every respect, curated for the digital age.

Yeah. He knew, and every detail was taken care of. That’s such a perfect little joke to seal this performance of death that opens up the grieving process. It’s stunning.

T: Yeah, totally. His last video, too. It’s, what, about four days after his death? I’m just waiting for him to rise from the grave like Lazarus did.

I honestly wouldn’t be surprised. Is there anything you’d like the world to know about this record that hasn’t already been said?

N: Go listen to it, instead of listening to us jabber on about it.