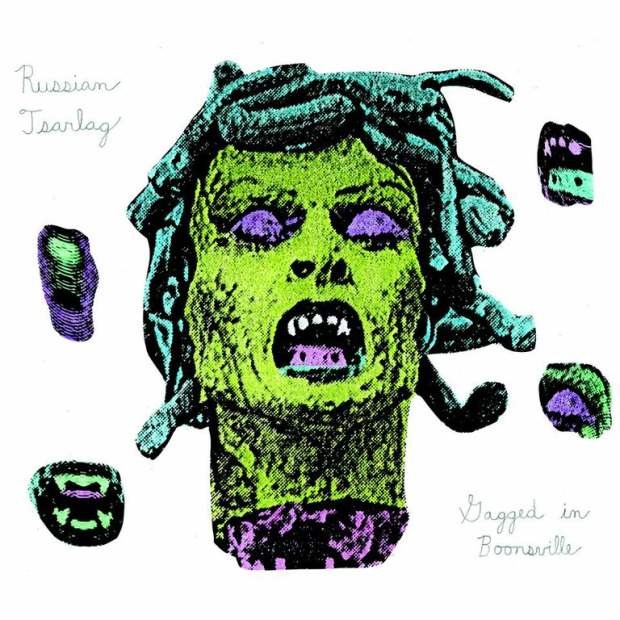 Only in the realm of DIY cassette fuckery could the term “garbage artisan savant” find endearment. It's got an effective and kitschy ring to it, like Toxic Avenger. I'd go as far to say that I miss coinage such as this; creative, appropriate, and somehow agravating to the eye. Hell, the inclusion of savant is obnoxiously unnecessary, considering I can't think of too many artisans in the garbage genre. But, Russian Tsarlag, birth name Carlos Gonzales, owns it like a merit badge on his sewage-stained sash.

I'm damn near overwhelmed with coinage to a point of having nothing left to my own creative accord. Dig this, he's calling “Plastic Door” a “squatter's lullaby”. Son-of-a-bitch, that's good. Lifted from Russian Tsarlag's upcoming Gagged In Boonesville record, “Plastic Door” is a piece to a greater tale of residents in a tenement apartment complex held under spell of an ancient Medusa poster in the basement. Suffice to say, Russian Tsarlag's latest effort operates under the guise of b-movie pop – fitting for a garbage artisan savant. Trash awareness is the game.

The squatter's lullaby experiences a series of false starts, as Gonzales shuffles through tapes of piano recordings, suction sounds, and his own bare howl. As he finds his footing in a melody akin to the eponymous track, Gonzales drags out “she's come back” in a manner that would lend little rest were its lullaby function applied. If his warning applies to the Medusa poster, Russian Tsarlag is not finished with his b-movie pop, but set the stage with “Plastic Door” for the bone-chilling sequel in which the poster seeks revenge.

Russian Tsarlag's Gagged In Boonesville is out June 11 on Not Not Fun. The black vinyl comes with xerox-smeared Medusa collage artwork by Carlos Gonzales himself, plus an 8-panel zine of original drawings and imaginary 2036 Tsarlag musings.