The best music of October 2011 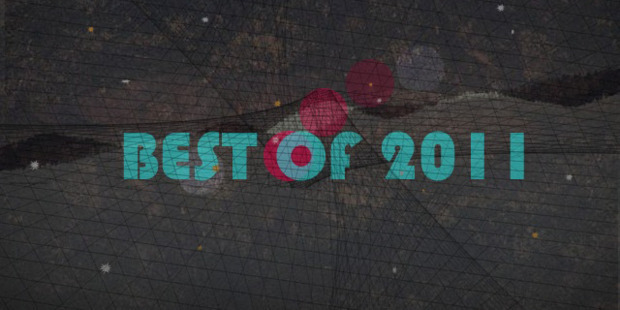 It's so hard to decide what the best music for any given month is going to be. Just kidding! No, it's actully not hard at all. The great records of October don't include any of those kinds of records one would call “growers”. All of these, you put them in whatever device you are using, press play, and that's it. You are snapped to attention. Everything falls into place. You are instantly in love with whatever man, woman, or beast made this piece of art (beastly music features prominently here). Albums that grow on you have a place, but they don't call it Rocktober for nothing.

Total Abuse, Prison Sweat (PPM)
Total Abuse' Prison Sweat LP opens with 7-minutes of distortion and high-art skronking that screeches and scrawls, functioning as the waking yawns and stretches for the band to rise for track two, “Early Morning”. The album intro “First Passage” gives the impression that the band slept under a bridge last night and are far worse off than you on Monday. But the feedback fuggery gets Total Abuse limber for “Early Morning,” which is a jaw-crack from a billy club for a wake up call.

The best music of October 2011

Jonwayne, Death of Andrew (Alpha Pup)
The lead single “King” is giving us the suspicion that Jonwayne has a thing for portly bosses. He's always made boss level beats, murky with heavy drums and paranoia-synth lines, but flipping a Rick Ross rapping “I'm treated like a king when I'm dining” sample can't just be a coincidence. It has to do with a respect for robust belt lines, right?

East of Underground, Hell Below (Now-Again)
The 1970s during the height of the Vietnam War continue to be a time of deep-seeded musical significance. The music written in protest, the music written in fear, and the music written in social unrest continues to fascinate our memories and our understanding of that era. It's difficult to imagine the US Army allowing band to form in the barracks, but an even greater stretch to think that once the band formed they would be permitted to record covers of politically charged songs like Curtis Mayfield's “Hell Below” or “People Get Ready”.

Weird Wives, Motherfuckers Gonna Be Walking 'Round With a Size 9 Diehard Up Their Ass, Cause Apparently They Ain't Never Seen a Short AC Man Get Bad Ass On Methadone (West Palm Beotch)
Before there was Surfer Blood, a few of the members were in a noise-rock band called Weird Wives, making that harsh scuzz that places them on the artier side of credibility. Through all the hype, Weird Wives plugs on as the courageous antithesis to Astro Coasting. Efforts to pin down Weird Wives' sound are futile, as it runs the gamut of Big Black, Thinking Fellers Union Local 282 and Jesus Lizard, only to toss in a synth-manipulation instrumental curve balls like “Alone Times”.

F.olk thinks very deeply about his intentions and it shows on the Wintersummersprung EP. The song titles might be lighthearted, but F.olk hints at story lines to be plucked from his instrumentals. Is it one girl or several girls? It is tough to be certain, but F.olk's production leads us into the fleeting, the fascinated and even the frustrated, which is an impressive emotional range for a 6-song EP.

Zola Jesus Conatus (Sacred Bones)
Nika Roza Danilova made us wait most of 2011 for this Autumn masterpiece. Taking her operatic sensibilities to task, Conatus has some of Nika's most evocative work to date with tracks like “Vessel,” “Seekir” and “Shiver” that encompass the soundscape of both classically trained vocals, electronic tapestries, emotive strings and more that has made this follow up to last year's Stridulum worth the wait.

High Places Original Colors (Thrill Jockey)
Because dance music has been given too many bad names and the cool kids still refuse to get on the dance floor. HP brings it back to the living rooms and your ipods.

A$AP Rocky, LiveLoveA$AP
Before the tape dropped, A$AP Rocky won us over by being humble damn near to a fault. His parents named him after the God-MC Rakim, but it never went to his head. He's of a rare breed in rap that believes in practicality and frugality with money, recognizes his favorites clothing lines are designed by homosexuals and can say “I like friends” in an interview without sacrificing his credibility. Post-LiveLoveA$AP, the Uptown rapper proved he was worth every penny of Kreayshawn's major label deal and a cool 3 mili of icing.

Chubby Wolf, Turkey Decoy (Boomkat/Digitalis)
Chubby Wolf was the moniker of Dani Baquet-Long, a talented musician who died tragically at 27. She's left a legacy of ambient recordings that are still fresh to the world, so you and I can enjoy discovering her work posthumously. Obviously there's a certain extra heft to recordings released from an artist who has left us, but even without the news (which I found out after listening to this work, personally), her compositions vibrate solemnly with a distinct sense of sadness and self.

Speculator, I See A New World mix
Sorry, we may be biased since he made it for our website, but Nick Ray took the time to mix together a few of his favorite blokes from across the pond and beyond and it made a lot of people happy.

Pharaohs, “Uhh Uhh” 12-inch (100% Silk)
Pharaohs' 12-inch on Not Not Fun's italo-influenced imprint is some straight acid melt that drips off the disco balls hanging from the smoggy firmament of LA's crotch.

USF, The Spray (Circle into Square)
An instrumental concept album based on a Jonathan Lethem short story. USF combine a variety of deep textures to produce a record that is both ambient and active.

AIDS Wolf, Ma vie banale avant-garde (Lovepump United)
Probably the only time getting AIDS for free is a good thing.

Future Islands, On the Water (Thrill Jockey)
We've already asked for their canonization, but Future Islands showed that they earned it with October's On the Water. Everything about it is perfect: Sam Herring's dressed in white and screaming at us to make it right; we are waltzing through synths that are cold in key but warm in what they have to say to us about harmony and new beginnings. Lots of other bands from their graduating class, Whartscape ca. late '00s, are breaking up but if Future Islands keeps making records like this they are obviously in it for the ages.

Rangers, Pan Am Stories (Not Not Fun)
This album is a kind of masterpiece ode to the spookiness inherent in '70s soundtracks and soft emulations of Steely Dan and its discontents, taken not from the angle of sputtering, destructoid tape manipulation or tampered sample collage, but from the same side of the line as any classic rock endeavor, with the intent to write some pretty great songs on the guitar.

Psychic Ills, Hazed Dream (Sacred Bones)
“Mind Daze” marks a sudden moment of structural coherency after a few years spent exploring the distances of drone and no-peak music that tested the limits of a four-piece's ability to stay in one place at all times. Psychic Ills are going for the brass ring of truly great fried and stoned psych rock for the first time since Dins (actually, more so than that 2006 album).

PrevPreviousJ. Rawls' jazz tribute to “Stakes Is High”
NextReallyNathan's out of tune /// out of spaceNext