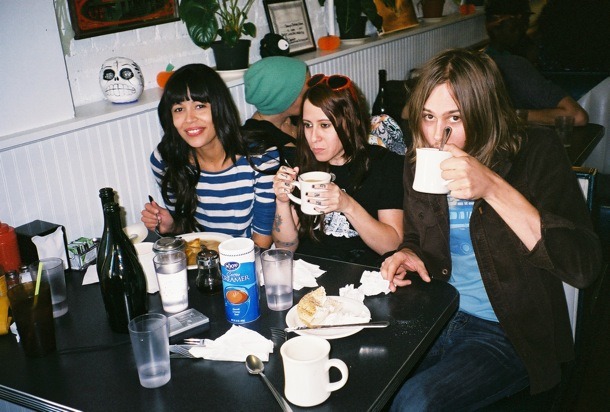 With a diverse group of bands playing all over Manhattan, Brooklyn and beyond, CMJ can seem like one long subway trip to a series of dark rooms where you slug PBR amidst unmoving bodies. Those mini-mind-blowing shows in tucked-away venues are the golden nuggets in the crapshoot we call CMJ. But while the sheer number of free shows and sick acts make CMJ hard to miss, the feeling of a fest is nowhere to be found.

Problem, meet solution. As we stalked the streets of New York chasing down our favorite local and traveling bands, we realized there’s one thing that can keep us together: a chain. And so began an interview series we’ve lovingly dubbed “The CMJ Chain Letter Interviews.” Tying all of our CMJ experiences together, each band we talked to gave us three questions to ask the next band, who proposed their own for the following band, and so on. May the chain never be broken (or your crush will never tell you he likes you)!

We kicked our series off on Friday with Chains of Love’s Nathalia Pizzaro after her Cake Shop show, met Brooklyn’s own Fox Schwach of Harvey Eyeballs in a concrete park/ pigeon battleground, and sampled the world’s best powdered creamer with Florida’s Beach Day at brunch on Saturday morning.

After years playing punk, singer Nathalia Pizzaro turned her fury into fuel for sixties- tinged, Spector-esque soul. Based in Vancouver, Chains of Love harkens back to the girl groups of yore, but all its members share a tougher core.

Now that you’re in a more subdued, vintage band, do you miss the thrash- around scene of punk rock?

I miss playing guitar like nobody’s business. I miss, like, throwing myself into the audience and ripping onstage. Now I’m playing tambourine, which is funny because tambourine ruins my hands. I get blood blisters and covered in bruises. And I always joke about how tambourines are like the hardest instruments to play. I seriously felt like I broke the back of my hand when we were in Brussels!

But yeah, Chains of Love has taught me a lot about patience and writing, not just wanking all over my guitar or screaming “fuck you.” It’s a chance for me to do something different, to learn how to sing in a different way, which is cool.

You wrote a great song about lies on Strange Grey Days. What’s the worst lie you’ve ever told?

I think the worst lie I ever told was to myself, about what I wanted and what I want to do with my life. There was a time where I convinced myself…I went back to university for six years and told myself that I wanted to be a doctor. I eventually became a veterinary technician and almost completed my biology degree in the hopes of getting into veterinary medical school. Not that it was a lie, but I tried so hard to get away from rock and roll and music…when Chains of Love fucking slapped me in the face. It was like a realization of where my heart really is. So, fuck it. I’m just going to be a vagabond and a gypsy and work as hard as I can to be onstage.

That’s awesome, because it’s working out.

Well yeah that’s because it’s who I am, it’s what I love. And you know, you can do anything you fucking want to, you could be the best whatever, whatever you put your mind to, whatever you put your heart into, but there’s a difference between doing what your heart wants and what your mind wants. It’s important to follow your heart. I don’t want to sound fucking cheesy, but it’s the truth. You’ve got to just do it. It’s so hard sometimes too – you’ve got your parents and your family telling you to go to school, be a good girl, get something stable, and rock and roll’s not stable. But you’ve got to go for it.

Do you feel like there’s more expectation to be “good” or like it’s harder to make the choice to say, “Fuck it” because you’re a woman?

Well, yeah! We talk about this in our band a lot cause, you know, the guys get shit-faced every night, they don’t need to look good in rock and roll, but it’s different for me. I can’t drink, I can’t do a lot of things because I’ve got a persona to upkeep and be, like, alive and awake and look good. So yeah, it’s harder for a woman, but…fuck it.

In the midst of Brooklyn-based Harvey Eyeballs’ constantly changing line-up, bandleader and singer Fox Schwach stays the same. The eight-piece “pop, but a little weirder” band plays a hot cover of the Bagel Bites theme song, and Fox says it’s all about not taking yourself too seriously…as long as it still works.

It’s hard because I do, personally, want to strive for a certain amount of respect, or…really you want leverage, is the key thing, because then you can do what you want. Right now, I’m definitely doing small venue – [points] that pigeon is standing on another pigeon – I don’t think I would ever want to play in an arena, although that could be fun…I was reading this thing David Byrne was saying about how you make music based on a specific space, subconsciously. Space there could be an abstract thing. He was saying that CBGB was way more conducive to the music he was playing at the time, and when he played at Carnegie Hall, it kind of sucked. I feel like once you start to get a certain amount [of fame], then you have all these people to deal with, and you don’t want to alienate people by only playing somewhere small.

So I don’t know, it’s a tricky thing, and some people really piss off a lot of fans but get to do what they wanted to do originally. So both the fan and the artists are a little at odds. And some people stay hood, but they’re broke their whole life and still working their day job. There’re merits to both, I guess.

Who are you most influenced or inspired by?

There’s always, like, a bazillion influences, but sometimes I try to be influenced by non- musical things, or like stuff on the periphery. So I always think of R. Crumb as a big influence, in the way he tells his stories and the way he conveys reality…sort of next to normal, but not quite normal. And I think for the same reason I would say David Lynch. I know it’s kind of cliché, but…it resonates with me, I guess.

Beatles or the Rolling Stones?

Oh man, that’s so hard. I guess…I feel like I’m way more familiar with The Beatles than the Rolling Stones, but I think in terms of energy I’d have to say Rolling Stones.

So The Beatles’ music, played by the Rolling Stones?

[Laughs] Exactly. I mean, The Beatles are hard cause they’ve gotten to this point where, like, people have written so many books and make speeches about The Beatles…it’s so mythologized. I feel like the Rolling Stones are still…it’s, like, more real or down to earth maybe.

Uhm…I think it was, like…you don’t really know what’s going to happen that first time. Because you’ve never, like, watched someone do it. Nobody’s told you how. Or, nobody told me how. And it’s this thing that you feel like you should be able to do, and maybe some of your friends did it and have talked about it. Like, I remember a friend, before I got into it, had already been walked in on by his sister in, like, sixth grade or something. It’s like an uncharted frontier.

[Laughs] Yeah, and you’re trying to figure out…am I doing this right?

Exactly…‘Woah! What was that?’ [All laugh]

Deep space or deep ocean?
How long is too long?
Crumple or fold?

Shit, those are amazing. Now I have to ask you…deep space or deep ocean?

For a band who based their name off of the ultimate relaxation, Hollywood, Florida’s Beach Day have been going at a break-neck speed since singer/guitar Kimmy Drake, bassist Nat Smallish, and drummer Sklyer Black got together a year ago…or at least, they’ve been going as fast as they can in their over-loved tour van.

What do you guys like to listen to when you’re driving from gig to gig?

Kimmy: We’ve been listening to a lot of King Tuff. Non-stop.

Nat: Jacuzzi Boys, Surfer Blood, Cults…oh! And we went through a huge Hole kick too.

S: Not me. I was asleep in the back for all that. I don’t know why you guys take [Courtney Love] so seriously – they take her so seriously!

K: I just love how she writes because she’s so unfiltered.

N: She doesn’t care. We love her, we even tweeted her.

K: ‘Courtney! Come hang out with us, we’re in New York, we know you’re here!’

N: Next we’re going to stalk her daughter.

With all the bands you’ve been in, for this one to make it…does it feel like the right one to you?

N: It’s definitely my last band. I will never do this with anyone else ever again. It takes a really amazing group of energies and mindsets, and it’s not the easiest thing in the world to find that – it’s so hard.

K: And we’re in that van together, I mean if you add everything up, it’s days and days…

N: It’s really cool, though, cause there’s times when I get home and I hang out with people and they don’t get my jokes because I’m with these guys all the time. So we’re all on the same mental wave, with the same inside jokes, and I turn around to say a joke to someone else and it’s like, oh, they don’t get it.

S: Yeah, like you don’t fit in with other people now.

N: Yeah, everyone’s always like, ‘Why are you so awkward?’ [All laugh]

K: Deep space. You can’t breathe in either, I guess.

N: The ocean is really scary to me.

S: I guess they’re both really cool, but you know in Star Wars, there’s an underwater palace and stuff? That would be cool…

S: No, under water. In The Phantom Menace, there’s an underwater palace on Earth, or whatever they call it.

How long is too long?

S: I don’t like that question. Jump over that one. Sometimes two months is too long. It depends. That’s a sucky answer, though. [Laughs]

If zombies attacked you, what weapon would you choose?
Twilight or Vampire Diaries?
Would you rather have sex with Voldemort or Dumbledore?

PrevPreviousMikky Ekko, “Pull Me Down”
NextThe Most Average Releases of October 2012Next