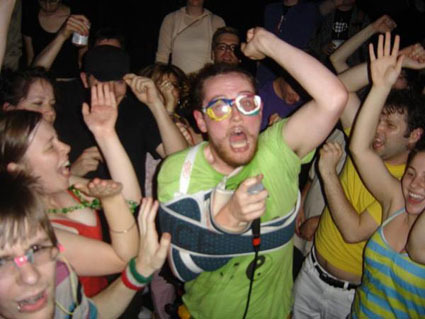 Dan Deacon will score Francis Ford Coppola's next film, Twixt Now and Sunrise. BUT WAIT, there's more! “Mr. Coppola and Mr. Deacon are collaborating on a larger level, details of which will be announced soon.”

Somewhere, Johnny Greenwood is gnashing his teeth while Daft Punk feels like they've been derezzed. The film, a “gothic romance,” will star Elle Fanning and Val Kilmer. Pretty soon we'll all be playing “Six Degrees of Dan Deacon.”

And while he's at it, Deacon can re-score Dracula. It took Gary Oldman 12 years to suck that bad again (Tiptoes. Oh my God Tiptoes).

Deacon is also touring North America in the meantime. Go see him. Cheer him on, and make him buy you a drink. On Frank's tab.