Desert Daze 2022 Preview: An apocalyptic dream of a lineup 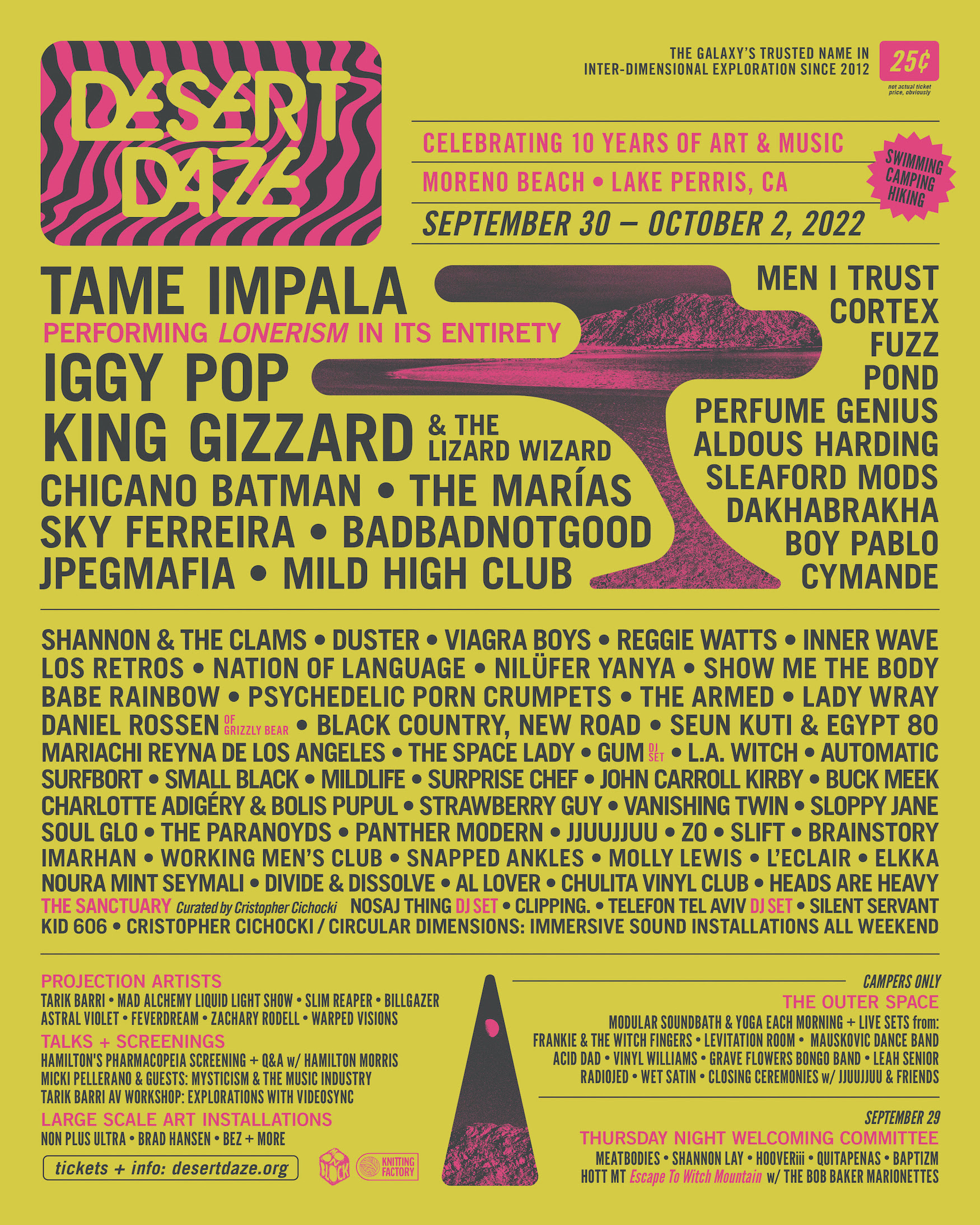 Okay Desert Daze. We see you.

Yesterday, the annual psychedelic-leaning music fest sent fans into a frenzy with the unveiling of the lineup for its upcoming edition, set to return to Lake Perris, CA on Sept. 30-Oct. 2. And once again, Desert Daze dazzles. For psych fans and beyond, it’s the stuff of apocalypse dreams.

The headliners of the jaw-dropping bill include festival vets Iggy Pop, King Gizzard & the Wizard Lizard, and of course the name on everyone’s minds; Tame Impala, celebrating the 10th anniversary of their seminal sophomore LP Lonerism and performing it in its entirety. In the words of Bojack Horseman’s Sarah Lynn, “that’s too much, man!”

For a smaller boutique festival like Desert Daze, booking Tame Impala is a feat in itself. The fest previously scheduled them to headline back in 2018, but in a shocking twist of misfortune, their set was halted two songs in and the fest shut down early due to a sudden lightning storm that rolled through the area. It was an unlucky nightmare in more ways than one, but we really don’t need to dig that up again. Since then, Tame’s notoriety and popularity have only increased to the point where they’ve become one of the biggest bands in the world and headlined almost every major festival under the sun. To have them return right now is a treat, but to have them do it while performing Lonerism – their greatest album – is simply unreal and possibly a once-in-a-lifetime occasion.

On top of that, the top lines feature another rare booking in alt-pop icon Sky Ferreira, who just *might* have a new album to perform by the time the festivities roll around. As with Sky, nothing is certain, so fingers are crossed. And then there’s a handful of psych-leaning staples in The Marías, Chicano Batman, Mild High Club, Men I Trust, Fuzz, and Pond, in addition to some intriguing out-of-the-box bookings like buzzy noise-rap titan JPEGMAFIA, ’70s French jazz fusion group Cortex (who I was pretty sure were no longer active, so that’s kinda crazy), verbose English post-punk duo Sleaford Mods, and Ukrainian avant-folk quartet DakhaBrakha.

And for all the campers out there, you’re getting a wild after-hours bash with live sets from Frankie and the Witch Fingers, Levitation Room, Acid Dad, Vinyl Williams, and more. Visual projections, talks and screenings, and large-scale art installations round out the activities, and even then there’s so much more fun to be had.

What I’m saying is, Desert Daze might be the best music festival on the planet. The location is pure nirvana, the music and art lineup is out-of-this-world, and all the other elements of the fest align to curate an aura of pure joy and ecstasy from start-to-finish. In all my years of attending festivals, I have never felt vibes quite like Desert Daze. And this time around, they’ve totally upped the ante of fun.

We see you Desert Daze. And when it happens, we’ll be living out our apocalypse dreams. Until then, we’re happy to help with your lineup research with our must-see lineup picks. Let’s dig in, because this river runs deep.

There’s not much more to elaborate on here, other than it’ll be the most crowded and anticipated set of the entire festival. Possibly the biggest crowd in Desert Daze history. The big-ticket seller. Don’t miss it.

The Detroit punk rock legend is still going strong as one of the most reliable and entertaining live performers in music. He headlined the festival back in 2017 to much acclaim, and his return to the fest is greatly welcome. We can’t wait to get down to classics like “Search & Destroy,” “The Passenger” and “I Wanna Be Your Dog” as we have many times before.

The wily Aussie psych rock titans have headlined the event twice before, and continue to climb rungs and cross over into the mainstream. They recently fired up a face-melting hour-long set at Coachella full of uptempo bangers. With a headlining slot and presumably more time to perform, their set will probably be more of a marathon than a sprint. Either way, they always send it.

Other than Frank Ocean, there is simply no bigger enigma in the pop music sphere than Sky Ferreira. The mercurial lo-fi alt-pop songstress’ last album, the iconic Night Time, My Time, came out nine years ago, and her touring itinerary has been slim. Therefore, her appearance here on this lineup is special. And while nothing is certain, there’s a solid chance she’ll finally release her sophomore LP, or at least more new tunes, by the time the fest rolls around. And if not, we’ll be just as happy to sing our hearts out to songs like “Heavy Metal Heart” and “Everything is Embarrassing.” Sky Ferreira forever.

The only thing more intimidating than JPEGMAFIA’s glitchy static-fueled sound is his live delivery of that sound. The New York noise-rap firebrand goes absolutely mental onstage and in the crowd. He also lives a bit outside the usual sphere of music that Desert Daze leans into, so his set will definitely be an intriguing spectacle as well as an opportunity for fans to really lose themselves in a high octane pit. Rowdiness guaranteed.

The Canadian dream pop band makes some of the most laid-back psychedelic-leaning music of any artist around. Their Twin Peaks Roadhouse stylings will leave fans melting with euphoria through languid layers of lo-fi guitar and lounge-pop synths. For a festival called Desert Daze, there isn’t a more dazed band on the bill.

I’m admittedly not that familiar with Cortex, but the French jazz fusion band is certainly a rare and eclectic booking for the fest. The band got its start back in the ’70s, and after some starts and stops, they’re apparently still around and blowing minds. An out-of-the-box pick for sure, but not to be missed.

What began as a Tame Impala offshoot with rambunctious younger-cousin energy, Pond has since morphed into one of the most acclaimed and important psych bands of their generation. And dare I say their recorded output in the last five years has eclipsed that of Tame’s? Either way, the Nick Allbrook-led unit conjures a kaleidoscopic technicolor pop sweep that’ll have fans shimmying and swaying with reckless abandon as day fades to night.

The small-town English duo’s verbose, minimalist post-punk ramblings are a thing of gritty beauty in a live setting. They conjure a vibe of prickly, mounting anxiety that’ll open your mind in ways both hypnotic and poetic. Dry, sardonic stuff through and through, and also loads of fun.

Ukrainian avant-folk world beat music. Do I need to elaborate? If only to point out that DakhaBrakha’s set was also a victim of the 2018 thunderstorm cancellation, so they’ll be fired up and ready to make good on what’s been promised to be a truly unique live performance.

The veteran band Duster has endured since the ’90s with an unbelievably consistent body of recorded material, and now the Santa Cruz group will bring their depressive, downcast brand of slowcore to Desert Daze, perhaps the perfect venue to perform new album Together and all their other dazed, scorched-earth soundscapes.

I saw English indie singer-songwriter Nilüfer Yanya at Coachella a couple months ago, and she was downright captivating. Her mix of indie rock, R&B, jazz and pop makes for a swooning, smoldering live experience. On the heels of her excellent latest album PAINLESS, Yanya’s set is a must-see.

The enigmatic collective of post-hardcore musicians and bodybuilders will make a rare special performance at Desert Daze this year, and they’re ready to confound as many people as they entertain. It’s as though the band members are all playing different songs layered on top of each other, but that kind of whiplash is an ugly beauty to behold. Just wait for the Eureka! moment to hit. Trust me, it’ll all make sense. Sort of.

Way too much has been debated about the current post-punk revival, but in any case, Black Country, New Road already transcended that label from day 1. The symphonic, avant-baroque balladeers have already released two instant-classic albums, but how will their sound translate in a live setting now that lead singer Isaac Wood has departed? I’ve never underestimated them before, and I won’t now, so you can count on me being there front-and-center.

The Los Angeles beat scene pioneer Nosaj Thing is one of the best and most reliable live performers in electronic music, brining along dazzling immersive visuals to go along with his dark, hypnotic, skeletal sound patterns. He’s set to perform a DJ set in the Sanctuary, and with that space’s heightened audiovisual components, it’ll likely be a brain blast.

Daveed Diggs’ noise-rap outfit combines politically-charged poetic musings and fiery static-filled beats, and the group’s show at the Sanctuary will deliver heady thrills in a pit of crowd-surfers and flying elbows. Time to turn up and open your mind.

L.A. producer Juan Mendez, a.k.a. Silent Servant, is enamored with the gothic new wave sounds of the ’80s, which he revives into the modern beat-driven sphere with imaginative aplomb. His DJ sets are fun, but his live sets are next-level, which is what we appear to be getting this time around. Another hidden gem on this stacked Sanctuary lineup.

Frankie and the Witch Fingers

Los Angeles garage-psych marauders Frankie and the Witch Fingers are one of the best bands in the game, period. And after nearly a decade of kicking around, the groups continues to hit new heights in creativity and popularity, and it’s in their live sets where they truly shine. Josh Menashe’s lead guitar freak-outs and Dylan Sizemore’s unnerving frontman presence yield a truly spectacular concert experience. All you campers out there, you’re in for a truly galvanizing late night party.

You can purchase tickets for Desert Daze HERE.