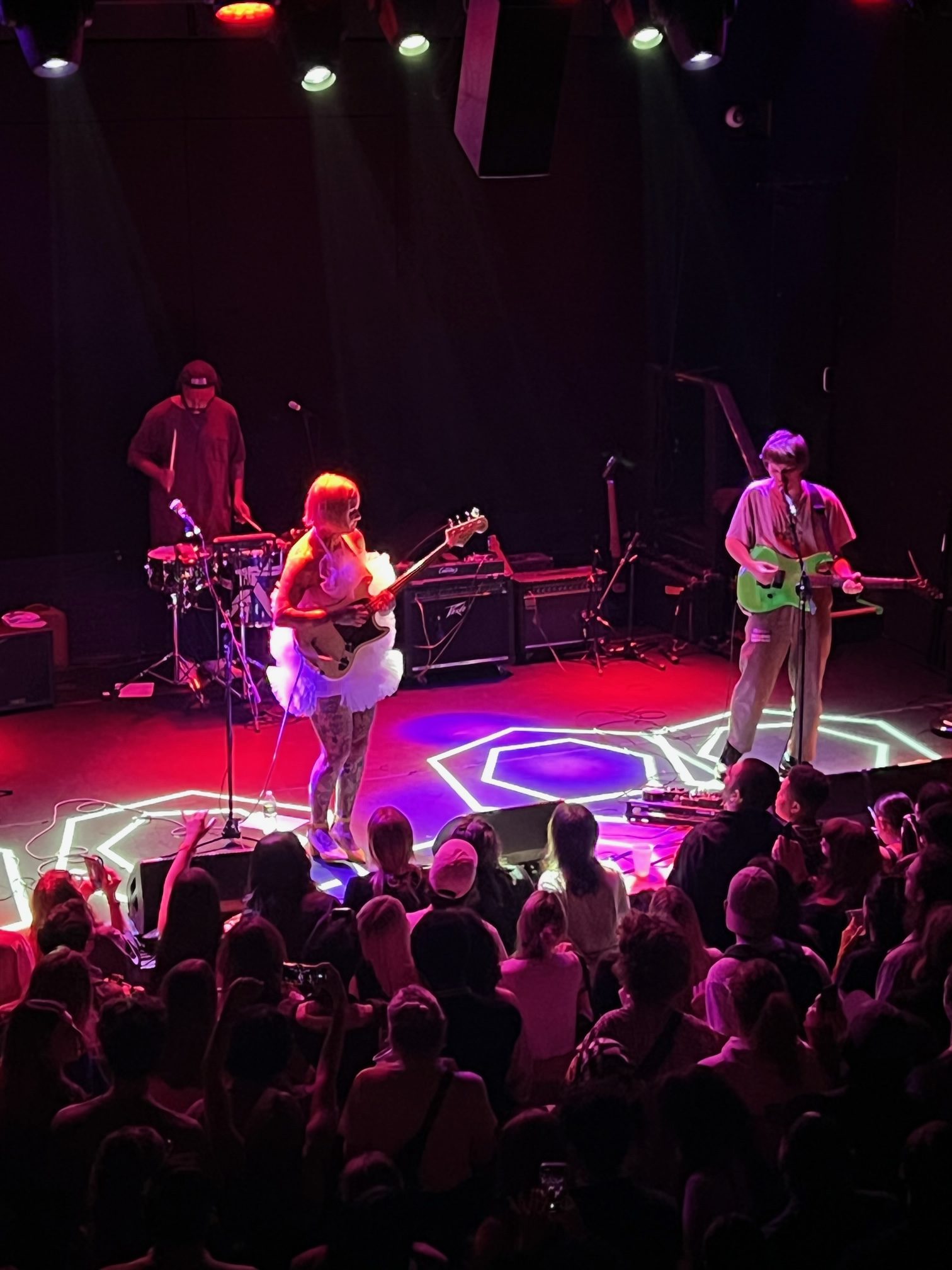 Located immediately off one of lower Manhattan’s grimiest subway stops sits NYC’s long standing venue Bowery Ballroom. The venue, like the stop, is grungy, a little funky, but inherently cool for ways one can’t articulate. Is it the slew of artists who’ve walked through the doors? The decaying wall paper in the bathrooms? Or the downstairs bar?

Much like the venue, and the subway stop, the grimy Chicago-based trio Dehd played New York City’s Bowery Ballroom for two grimy sold-out nights ahead of the release of their forthcoming record Blue Skies – out today via Fat Possum Records. When googling the definition of the word “grimy,” one word sits in its place – dirty. And in terms of the subway and the venue, that may be what I mean, but when it comes to describing music as grimy, well, it’s surely a compliment.

Emily Kempf, Dehd’s kinetic lead singer, waltzed on stage tattooed from head-to-toe while in pastel yellow mary janes, a white poofy dress – which she insisted made her look like “Carrie Bradshaw and not the mushroom guy from Tik Tok” – and said, “Sup hoes.” Singer and guitarist Jason Balla and drummer Eric McGrady then followed.

The trio opened with their career-driving single “Lucky,” a song that sounds like it was written by SoCal surfers. The setlist featured 17 songs mixing together hits from previous album Flowers of Devotion as well as songs from their new record Blue Skies. Dehd’s songs all have a similar sound DNA – much like Red Hot Chili Peppers, for instance – in that they have a special, consistent sound that’s unique to them.

Kempf has said before in interviews that her vocals are intuitive and her techniques without training. On songs like “Flood” or “Flying,” her voice shifted from screaming to whispers, deep to high all while euphoniously maintaining the lyrics. Off the new album, Dehd played the most recent single “Window” as well as the lead single “Bad Love,” both of which have performed well amongst indie rock listeners. To close out the set, they enlisted openers Bless to collaborate on the Dehd original “Desire”; Bless rapped over the song’s second verse.

The contrasting energies of the three on stage make for a kind of youthful intimacy, like watching a bird’s eye view of three best friends having fun together on a Saturday night. As a performer, guitarist and singer Jason Balla incorporates so much energy into his every move it’s hard to not want to emulate it. Kempf is refreshingly honest with her stage banter; she asked the crowd to let her know “if her boobs comes out,” and told tales of the hungover morning she had eating a crumbled muffin from La Columbe in her hostel, which was poorly advertised as a “hotel.” Drummer Eric McGrady stands the entire time he plays while silently exiting the stage for the closing vocal notes of the final track. What makes Dehd so great live is that they don’t take themselves too seriously even though they play music that is more or less, serious. Well, seriously good. The incredible contrast between Balla and Kempf’s vocals and guitar playing, along with McGrady’s intensifying drum lines, makes for a multitudinous sound.

Dehd’s new record Blue Skies is out today via Fat Possum Records. You can purchase it HERE and stream it below: