Solid Sound, Wilco’s music and arts festival held every other summer, returns to MassMoCa in North Adams, Massachusetts, June 28th – June 30th. The festival is held on the picturesque and architecturally stunning grounds of one of the country’s premier contemporary art museums (whose galleries are open to festival attendees!), located in the beautiful Berkshire Mountains region.

Solid Sound is a bit of a hidden gem in the festival scene, that offers an always-excellent lineup of music, comedy and art, great food, the most pleasant festival atmosphere I have experienced, and lots of Wilco.

Wilco plays the headlining sets on Friday and Saturday night, which in true Wilco fashion typically run close to three hours long. The band has made a tradition of shaking things up with a special themed set on Friday night; in 2017 the legendary set was a performance of Being There in its entirety, immediately followed by a surprise complete performance of Yankee Hotel Foxtrot (in 2015 the Friday set was all acoustic, and in 2013, 27 straight covers).

Here is this year’s day-by-day lineup: 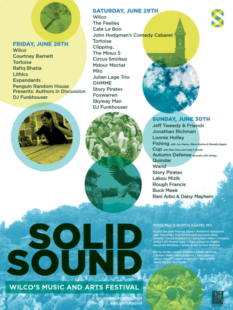 Highlights include Courtney Barnett, The Feelies, Cate Le Bon, Buck Meek and obviously Wilco. John Hodgman’s Comedy Cabaret is always a blast, and usually has some cool surprise guests, including Nick Offerman in 2017.

Tickets for the festival are sold out, but there is some availability on the festival’s official ticket exchange here.