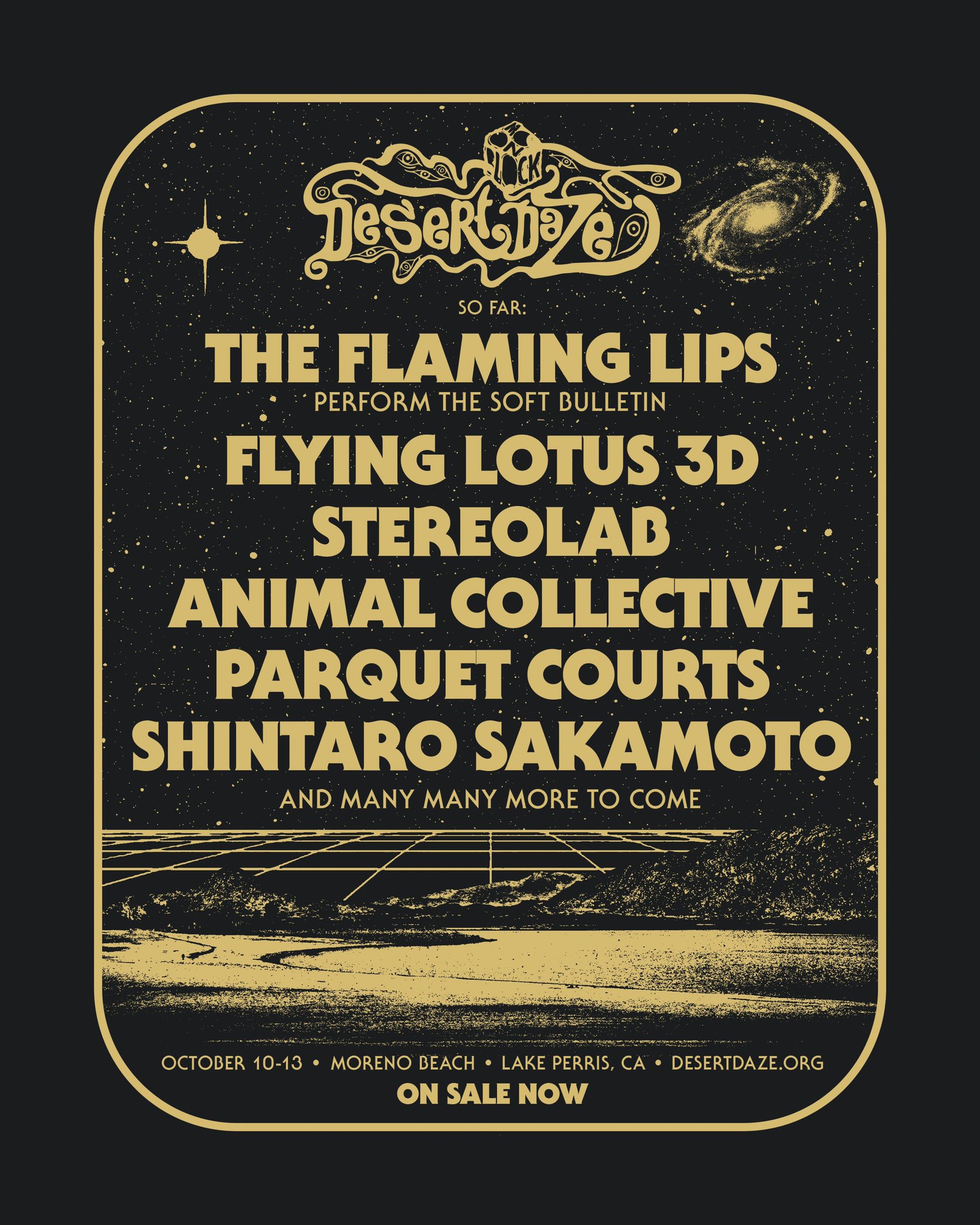 The first wave of headlining artists has been announced for the eighth edition of Desert Daze, set to take place October 10-13 in Lake Perris, CA. Animal Collective, The Flaming Lips, Flying Lotus 3D, a reunited Stereolab, Parquet Courts, and Shintaro Sakamoto top the bill for the fest, which will reveal dozens more performers in the coming months.

English-French avant-pop collective Stereolab recently reunited after having broken up back in 2009. The veteran group is beloved within the psychedelic music scene, having released several instant-classic albums throughout their run, including 1996’s Emperor Tomato Ketchup and 1997’s Dots and Loops. They’re set to play their first show in over a decade on May 30 in Belgium. They may just be the most anticipated act of this year’s festival, period.

Los Angeles experimental hip-hop producer Flying Lotus will bring his high-tech 3D show to Desert Daze, and it promises to be an immersive, otherworldly audio-visual experience. The lauded beatmaker will be performing tracks off his highly-anticipated sixth album Flamagra, due out May 24 via Warp.

Meanwhile, psych-tinged indie titans The Flaming Lips will finally be gracing the Desert Daze stage, and they’ll be performing their epic magnum opus The Soft Bulletin in its entirety. The 1999 release topped many year-end lists upon its release, helping to solidify The Flaming Lips’ reputation as one of the best indie bands of their generation. The Soft Bulletin turns 20 today (!!!), and it is widely considered the band’s masterpiece.

Shintaro Sakamoto is a veteran singer, songwriter and multi-instrumentalist, most famous for his work with the legendary Japanese underground psych-rock band Yura Yura Teikoku. Since forming in 1989, they released 12 studio albums before breaking up in 2010. Since then, Sakamoto has released several solo albums of wandering, heady, experimental rock music, including 2014’s excellent Let’s Dance Raw.

Finally, wry garage rock rising stars Parquet Courts round out Desert Daze’s first wave transmission. The New York band is the youngest of the acts announced so far, and they are currently touring in support of their terrific sixth album, last year’s Wide Awake!

Tickets for Desert Daze went on-sale today, and they can be purchased via the festival’s website HERE. We’ll be sure to bring you more coverage as artists get added to the lineup, and we will absolutely have a festival review with a full photo gallery afterwards. In the meantime, watch a clip of a Stereolab performing “Cybele’s Reverie” below.