The Coachella Valley is a Music Video Haven 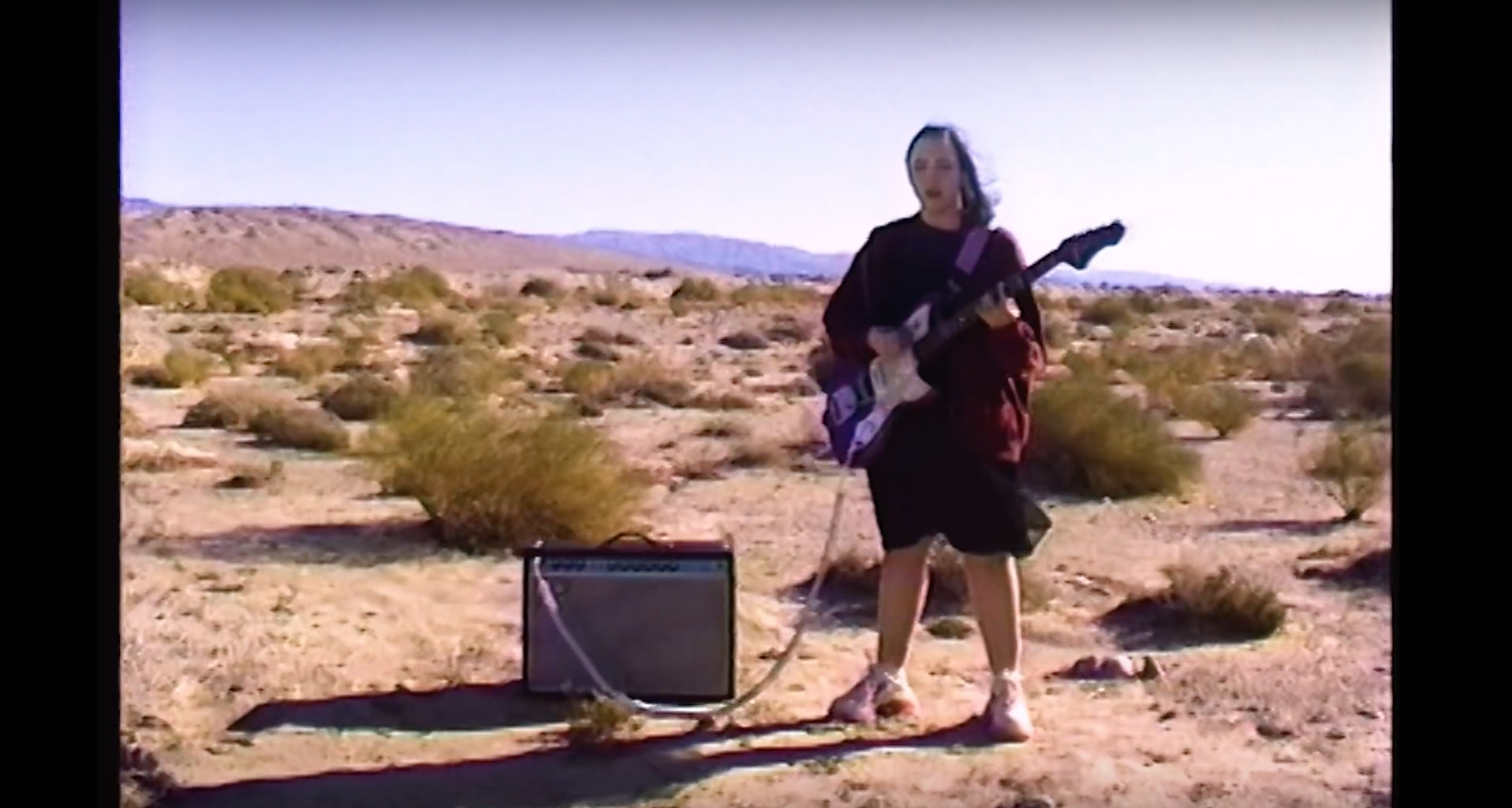 The barren, desolate beauty of the Coachella Valley has always lent itself well to music video filmmaking. Over the years, countless videos have been shot from the windmills outside Palm Springs to the abandoned shacks along the Salton Sea – isolated areas that visually bring out the Romantic-era poet in every artist.

Most crucial to this is the versatility that the area provides. Vampire Weekend’s “This Life” is probably the most notable Coachella Valley-shot video in recent years. Directed by Emmett Molloy, the black-and-white clip for their 2019 single was shot entirely in and around Palm Springs, and follows a laid-back local named Wade as he drives his vintage car around the backroads of town, picking up a number of famous passengers along the way – including Danielle Haim, Ariel Rechtshaid and frontman Ezra Koenig. We get all the textbook desert imagery along the way: palm trees, distant snow-capped mountains, Koenig jamming out in front of the iconic windmills, etc. The video highlights a simpler, slower, more carefree pace of life that consumes the Coachella Valley. For all the imposing surrounding nature, Palm Springs is a loungy, expensive retirement community after all. The clip perfectly embodies that lived-in, retired hippie-boomer Van Morrison vibe that “This Life” is going for.

Meanwhile, Justice’s video for “Fire” used this exact basic concept just a few years prior. Here, the duo drives around in a vintage car, picking up Susan Sarandon along the way (for whatever reason). The rest of the video then follows them cruising the highways along the stretch of windmills, interspersed with footage of Sarandon dancing in the backyard of a Palm Springs mansion. It’s sleek, funkier and way more random.

And yet, in the Coachella Valley, the pendulum also swings the other way. Long stretches of the video for Grimes’ 2014 track “Go” were shot at the apocalyptic locales of the Salton Sea, a place that was once a booming resort destination in the ’50s and is now a crumbling, desolate ghost town in the middle of nowhere. In this color-saturated clip, Grimes and collaborator Blood Diamonds trek through abandoned buildings, acidic lakesides and sandy dunes as hazy red and pink pyro effects light up around them. Visually dazzling and ominous, the video underscores an intensely medieval vibe that is perfectly in line with the track’s visceral, primal nature.

On the other hand, much like the electronic alt-rockers’ music, Phantogram’s video for “You Don’t Get Me High Anymore” is high-octane and action-packed. Here, the Salton Sea comes to life in the form of a man taking an ax to an abandoned building, singer Sarah Barthel strolling along the shore, and motorbikes kicking up sand on the nearby dunes. One of the great logistical benefits of shooting somewhere like the Salton Sea is that you can get away with virtually anything. You don’t need to seek permits, and you definitely don’t need to sign location waivers. The area goes almost completely unpatrolled by law enforcement, so you can trespass pretty much all you want. You can smash windows in long-abandoned houses along the waterfront. You can set off fireworks, haze and other pyro effects. And you most certainly can jump a motocross bike anywhere you damn please. All the factors align to make the Salton Sea a perfect place for visual storytelling.

When you’ve been an aspiring (failed) filmmaker like I have, you probably have a story about working on a film project out in the Coachella Valley. It’s basically a right of passage for any P.A. trying to break into the industry. As visually stunning and dynamic as some of these desert-shot projects can be, the reality is that the experience of working on one is absolute hell. For one, the heat is unbearable. And if you’re out there in the first place, then your shoot is most likely very low-budget, which means the amenities suck and the crew is very inexperienced. Which then leads to a long schedule, bad shooting conditions, and snowballing tension amongst the crew. The further east you travel through the Valley, the hotter it gets, which means the Salton Sea is the absolute worst. If you’re working a music video, then you’re mega-fucked. I happened to work one of these double whammys. It was back in 2013 – the dying days of the EDM boom – on the set of the video for country-tinged electro-house DJ BOTH’s track “Straight Outta Line.”

Now, the reason why music videos suck to work on is that 99% of them aren’t union-sanctioned, which means producers can cut all the monetary corners they want and get away with an unruly, brutal shooting schedule. Ultimately, the mantra of a music video set is simple. You work until it’s done. Sometimes that means 12 hours of work. Other times, it means 24 hours straight. In straight terms, that shit is not cool.

Despite the bare-bones budget, the shoot for “Straight Outta Line” had a surprising amount of talent involved. It was directed by English filmmaker Lucy Tcherniak (who would go on to helm episodes of the acclaimed Netflix miniseries The End of the Fucking World), and starred Gabe Nevins (a former child actor, skater and star of Gus Van Sant’s 2007 indie Paranoid Park) as well as rising ingenue Johnny Ortiz (who would go on to star in ABC’s American Crime miniseries and Disney sports flick MacFarland, USA, and who is now semi-famous). The pair, along with a spritely young actress, played a trio of hitchhikers backpacking through the Salton Sea – burning up their IDs, train-hopping, camping out on the shore, and just generally unleashing carefree, turning-over-a-new-leaf spiritual vibes over a ridiculous country-house beat. How the producers were able to lock down such talent in front of and behind the camera is still beyond me.

In my case, I was hired as P.A. to drive around the prop truck that the script called for (with the caveat being that I had to provide the actual truck, which is asinine now that I think about it, but oh well). So I begged my friend to borrow his pick-up before driving out one morning from L.A. to the Salton Sea at the crack of dawn, and then proceeding to work a 14-hour shoot in the blazing sun in the middle of July. I can’t tell you how lucky I was to have the job that I did that day. My job involved sitting in the truck waiting to drive it into a shot (while blasting the A/C). The rest of the crew didn’t fare as well. It was a standoffish work environment, to say the least. Also, I never ended up getting reimbursed for the truck’s insane gas bill. And while the video actually turned out pretty decent, anytime I watch it, I just cringe while being reminded of the hell we went through that day. 1.7 million views ain’t too shabby though.

Which brings me to one of the best videos released in the past month, Soccer Mommy’s “circle the drain.” Unlike my experience shooting in the Coachella Valley, this one looks like it was actually a blast to work on! First off, it was shot in Palm Springs, a less rugged and more manageable location for a shoot than Salton Sea. And given the timing of the clip’s release, it was most likely done this past winter, avoiding the traditional scorching weather that I had to endure.

For all the iconic shots that Palm Springs provides, I believe this is the first video ever to utilize the now-closed-down Wet N’ Wild Palm Springs waterpark as a main setting. In this one, a crew of skaters sneaks into the shuttered waterpark where we get a montage of them riding down the waterslides – intercut with footage of Sophie Allison performing the song against the backdrop of a vast desert landscape. It’s a beautifully-executed video in that it perfectly captures the cleansing, cathartic spirit of Soccer Mommy’s music. I’ve always felt like Allison’s sunny sonic disposition stands in slight contrast to her melancholic, often-painstaking lyricism. And yet this tightrope walk lies at the heart of her musical identity – her ability to unleash every painful, confessional beat in her arsenal while maintaining a gritty, empowered, determined attitude. There’s an unfurling sense of freedom in the grainy shots of the skaters careening up and down the towering waterslides, in Allison shredding her guitar with the windmills stretching endlessly behind her, and especially in that cute moment near the end when she attempts to skate. It’s a searingly emotional track that, when paired with this clip, manages to also be charming and therapeutic. The act of skating is a release, and in this case, it directly mirrors the emotions of the song. Plus, I’m willing to bet that everyone trespassed on that waterpark, which makes it even more rad.

I absolutely love videos like these that mine simple daily life moments in poignant ways. And it’s why I chose to spotlight it in my new monthly “Highlight Reel” column. It’s a recurring article that, in addition to analyzing various aspects of music video filmmaking and technique, will parse one particular video per month while also serving as a playlist corralling all the best videos of the last month. With that in mind, go ahead and check out the full list of highlights and watch the entire YouTube playlist below. And stay tuned for more video coverage on the horizon!