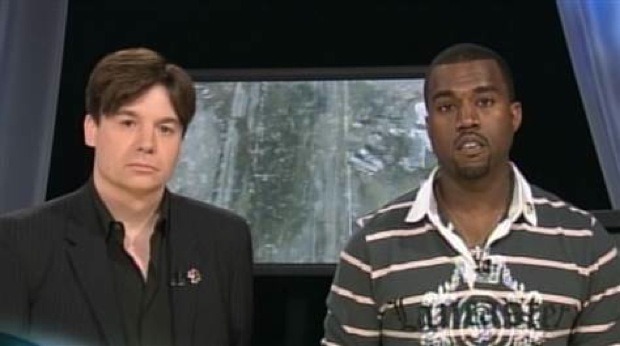 Upon reading that old gun-slinging M-Fer G.W. Bush considered his “all-time” (seriously, he said all-time) political low point to be Kanye West calling him a racist, I laughed it off. I'm so post-racial now that my President is black and getting riled up over ole G.W.'s zany persona is sooo early Naughties. What I'm not down with is negating rare moments of impromptu, televised political statements made by celebrities through the act of sympathizing with W. years later just because America is post-racial or something.

I swear, if Zach Galifianakis admits he didn't smoke a joint on the Bill Maher show, that it was just a shameless plug for Cloves (which is how it's being spun)… well, fuck-me-running: every successful celebrity is in a goddamned secret society.

Seriously, what happened since 2005? Remember the year Kanye made us all proud by making Mike Myers dreadfully uncomfortable?

I hate the way they portray us in the media. You see a black family,
it says, 'They're looting.' You see a white family, it says, 'They're
looking for food.' And, you know, it's been five days [waiting for
federal help] because most of the people are black. And even for me to
complain about it, I would be a hypocrite because I've tried to turn
away from the TV because it's too hard to watch. I've even been shopping
before even giving a donation, so now I'm calling my business manager
right now to see what is the biggest amount I can give, and just to
imagine if I was down there, and those are my people down there. So
anybody out there that wants to do anything that we can help—with the
way America is set up to help the poor, the black people, the less
well-off, as slow as possible. I mean, the Red Cross is doing everything
they can. We already realize a lot of people that could help are at war
right now, fighting another way—and they've given them permission to go
down and shoot us! George Bush doesn't care about black people.

It was fucking brilliant. He called out racism in the media and the government like no two birds had been killed with a single stone ever before, or at least since that awesome phrase was coined. He conceded to his own nouveau riche betrayal by admitting he went shopping. He portrayed himself as damaged and overflowing with regret to the point of epiphany. I remember watching Kanye's bravery in admiration, (his uncertainty making such a bold statement was palpable), but he said what white people are too white and privileged to comprehend without being knocked in the face with it. I like to think it inspired unbridled humanity.

Five years later, it's all hunky dory since a former President admitted he got hurt feelings:

There's been a lot of renewed conspiracy theory/Illuminati talk in hip hop as of late, people claiming Jay-Z has joined the unseen hand, etc. I've always considered it the quickest way to eradicate credibility, but I may be changing my position if Kanye can forgive George W. Bush for his Katrina actions. If the Skull & Bones were Fight Club, the first rule of Skull & Bones Club would be unquestioned forgiveness of your new fraternal brothers (yup, I just fucked my credibility).

Oddly enough, in all this media malarkey the one person that wins is NBC's Matt Lauer (not saying this because we share an alma mater), a.k.a. the fuggin' media. Unlike Houston radio personality Devi Dev, who let Kanye slide on not voting in order to get to the bottom of who he follows on Twitter, Lauer carpe-fucking-diem'ed the hell out of his Bush interview by engaging in this exchange:

Lauer: “You say you told Laura at the time it was the worst moment of your presidency?”

Bush: “Yes. My record was strong, I felt, when it came to race
relations and giving people a chance. And it was a disgusting moment.”

Lauer: “I wonder if some people are going to read that, now that
you've written it, and they might give you some heat for that. And the
reason is this–“

Lauer: “Well, here's the reason. You're not saying that the worst
moment in your presidency was watching the misery in Louisiana. You're
saying it was when someone insulted you because of that.”

Checkmate. The interview can been on NBC's Matt Lauer Reports on November 8. Kanye West's My Beautiful Dark Twisted Fantasy is out November 22.