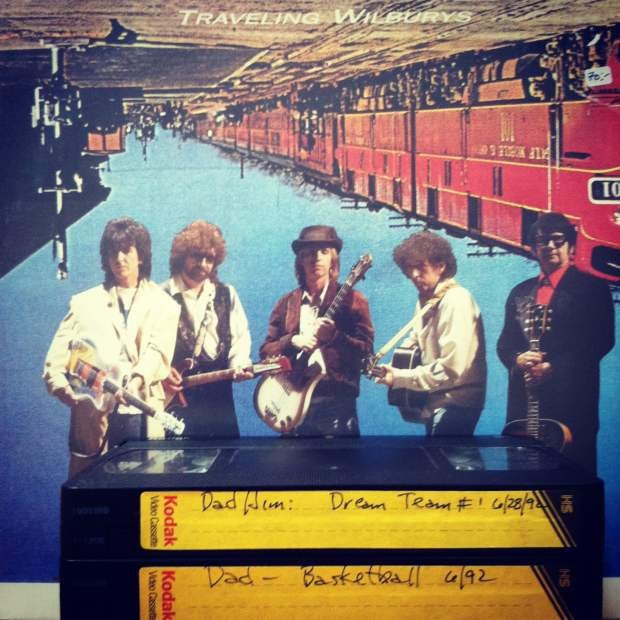 [Ed's Note: It's been a long time coming, but the Dream Team Retrospective Series finally comes to a close with a different edition than originally planned. We think you'll like Dave's new direction though. To read Part 1 of the series click here.]

I recently watched NBATV’s documentary on The Dream Team; while not exactly a puff piece, I was disappointed by the film’s surface-deep approach to some of the controversies surrounding the team (tell me more about snubbing Isiah and treating Laettner like a second class citizen) and its kid-gloves approach to contextualizing the team’s historical significance. For those of us born between 1977 and 1983 The Dream Team was our sports-Woodstock and arguably the quintessential 90s pop-culture event.

Was there ever a generation more convinced of its invincibility? And can we really be blamed for our attitude of entitlement and predestination? As the sons and daughters of the affluent Baby Boomers, we grew up enjoying largely uninterrupted economic growth, understanding distant and lopsided through the prism of video games, and watching dreams of unchecked conspicuous consumption come to glistening fruition. Rampant American nationalism was reinforced at every turn: our socialist competitors had seen their ideology and infrastructure crumble around them while our Technicolor ethos of righteous capitalism left us more prosperous and more entertained.

The Dream Team’s effortless and charismatic victories were a spot-on metaphor for the “Entitlement Generation.” Witness the smiling and seemingly predestined annihilation of the primitive basketball world and believe that to be American is to be superior is to win with the cheat-code-enabled video game ease. Our opponents welcomed the Dream Team like saviors and conquering heroes, famously asking for autographs and taking photos with the Americans—the mythos of cultural imperialism was reborn in the 1990s.

By contrast, the hard-working Baby Boomers and their Greatest Generation elders had the maniacally prepared and confident Bobbie Fischer shrewdly dismantling the methodical and ever-humble Boris Spassky as their competitive metaphor (among others) —it supposedly illustrated the supremacy of American independence and innovation over the dogmatic, ascetic Communists. To young, impressionable chess fans, the message was: work hard, be different, question authority, and you will win. In 1992 the supreme ease of The Dream Team’s dominance falsely told me, to be American is to be born to win.

I recently watched my old VHS copy of the gold medal game against Croatia and delighted over all of it, even the commercials. Three blades? How quaint, Gilette! What are we up to now, a baker’s dozen? The game was, of course, a rout, though Croatia (Toni Kukoc and Dino Radja, in particular) kept it respectable through the first half and showed flashes of the European basketball micro-revolution to come. In the end, though, it was more of a celebration than a competitive event.

Rewatching the game, I tried to jot down the moments where I sat up and exclaimed, “holy smokes, that pass!” but stopped keeping track after the first dozen or so.

The teamwork and improvisation was pure jazz—still stunning now, if not more so. One moment I’d find myself enamored with Ewing’s touch and athleticism (it’s a shame that his later career was so tarnished by diminished agility and poor shot selection), the next with Clyde Drexler’s open-court speed. But then another, momentarily forgotten Hall of Famer would check in to the game and you’d be slapping your forehead anew. “John Stockton is the backup point guard? The all time assists and steals leader is your backup? Ewing is looking slightly winded, let’s spell him and put in The Admiral!”

After the foregone conclusion had been reached, the gold medal ceremony felt like a coronation. Magic beamed iridescently while Larry Bird looked almost visibly touched, one final dramatic contrast capping a rivalry filled with them. Tough guys like Barkley and The Mailman clutched oversized bouquets and seemed to cherish the emasculation; you can’t fake the looks on their faces. I’ve seen Kobe try.

Watching it now still inspires and moves, though for much different reasons. My favorite part of the ceremony and the entire 1992 Olympic games, probably, is when the Lithuanian squad emerges from the tunnel to accept their bronze medals clothed head to toe in gaudy, Grateful Dead-supplied tie-dyed uniforms (the image of the skeleton dunking is one half of the two-fold origin of the Death Dunk moniker)—there is a documentary about the Lithuanian squad currently in theaters, which I have yet to see. They were underdogs athletically, financially and politically and when they crashed The Dream Team’s crowning, so did Bob Weir and Mickey Hart. Never have basketball and rock overlapped in such strange, poetic fashion.

Instead of adding my voice to the multitudes by comparing the 1992 American men’s squad to later incarnations, I’m going to honor Lithuania by letting the spirit of whimsy wash over me and drafting The Traveling Wilburys 2. The Traveling Wilburys are The Dream Team’s musical analog: they emerged from the same era (Volume 1 came out in 1988, the ironically-named Volume 3 in 1990), featured all-time greats truly collaborating, and showcased a lineup unprecedented in the history of supergroups. So here we go:

PB (Point Beatle – previously George Harrison): Paul McCartney. Pretty limited options here, obviously. It’s either Paul or Ringo, and one could do much worse than Macca when constructing the second coming of the ultimate classic rock supergroup. I feel like Paul-bashing is en vogue right now because of some of his recent transgressions, but I’m a full-fledged McCartney apologist. The man wrote a hundred or so of the greatest songs of all time, he’s earned his schmaltzy period. We can’t have Wilburys traveling around without at least one Beatle. This roster spot is a lock.

GF (Generational Voice – previously Bob Dylan): This is a tough position to fill. Dylan was the Jordan of the Wilburys: wily, aloof, the most reluctant to buddy up, and always the coolest guy in the room (one of my favorite moments from the Traveling Wilburys making-of documentary is when the legends are arriving at the studio in their expensive sports cars, and Dylan pulls up in a beat up conversion van—the man is untouchable). Just as Jordan was the last Dream Teamer to sign on, I imagine Dylan was probably the hardest Wilbury to enlist, as well. So while Zimmerman is irreplaceable, there is really only one choice: Paul Simon. He has the protest-song pedigree, the cold aloofness, the songbook, and the cultural transcendence. This roster spot is also a lock.

PL (Power Loner – previously Tom Petty): What you want out of your power loner is defiant self-confidence, effortless “fuck you” charisma and a tradition of reluctant but fruitful collaboration. This one is pretty easy, to me: Neil Young. First of all, the man is a legend and has tremendous upside: can you imagine Paul and Paul harmonizing while Neil is hunched over clutching his Bigsby and releasing feral guitar howls? He also fits (and surpasses) the anti-establishment template established by Petty and would have no problem dealing with any supergroup squabbles that will inevitably arise (see: CSN&Y). Locked and loaded for this spot.

CP (Center of Production – previously Jeff Lynne): People often wonder what Jeff Lynne was doing in such rarified company as the Traveling Wilburys, but you have to remember that he was in many ways the common thread that brought everyone together. He was behind the board for records by Petty, Orbison and Harrison (though I’ve often wondered if Dylan looked down his nose at Lynne’s production style which was decidedly un- Dylan) and was, along with Harrison, the de facto producer of both Wilburys records. I considered some other legendary player-coaches for the CP position: Nick Lowe and Peter Gabriel, for starters, but one candidate stood out as the obvious choice: Lindsey Buckingham. He’s got the curly hair, the experience wrangling together unruly groups of people (ahem, Fleetwood Mac) and extracting cohesive albums from contentious situations. He’s also something of a guitar hero who would fit in nicely into the co- lead-guitar position with Neil—who I imagine would mock Lindsey mercilessly for his eyeliner and general air of pomposity. Every band needs a Christian Laettner.

SV (Swing Voice – previously Roy Orbison): This is the toughest position in the starting five to fill because of Roy’s skill set: inimitable vocal prowess, elder statesman status, and the important glue-guy roll as “quiet outsider”. I haven’t been able to think of anyone who fits these qualities to a tee, which begs the question: does one simply draft for need or take the best legend available? If the latter, you’d have to go with Bruce Springsteen. And though I’m a fully converted Bruce believer, I’m not sure how he’d fit in with the other teammates. He’s a tweener: partly a Generational Voice, partly a Power Loner. He has the vocal chops, but I’m not sure he’d fill the void left by the departure of Roy’s smooth tenor and isn’t necessarily known for harmonizing. Now, if you’re looking for pure vocal prowess, Bono springs to mind (and then springs quickly out of mind). I feel like his overall vibe (decidedly non-quiet-outsider) would edge things closer to Chickenfoot territory because of the sheer zaniness of the combination. How about David Crosby? He’s not a legend of The Boss’ calibur, but would probably be great for team chemistry and is one of rock’s greatest auteurs of vocal harmonizing. Plus he would bring the weed. Another (previously mentioned) candidate is Peter Gabriel: powerful, distinct voice, elegant demeanor (a positive locker room presence, I’d imagine) and possessing production chops to act as Lindsey’s sounding board for mixing decisions. Huge upside. The leading candidate, though, is Willie Nelson. This all time vibey grinder has the sweet tenor, the elder statesman authority, the reefer supply, and is in many ways the ultimate quiet outsider. Willie has had a long history of fruitful collaboration, can sing perfect harmonies and would look right at home strumming along with Neil, Paul, Paul and Lindsey. Red headed stranger, you’re in. Wilburys, where we’re headed, traveling is not a violation.

So how does this fictional supergroup stack up to the original? Terribly, of course! What made The Wilburys so special wasn’t their pedigree (though inimitable) or their records (great, but with some pretty silly stuff), it was the sheer spontaneity of the collaboration. This wasn’t a project born at a record label or over email; this was sheer chance (legend has it that George had left his guitar at Tom’s house which is how Tom became involved). I had always envisioned that, with the degree of the talent involved, the songs were written and recorded piece-meal; but as the video tapes show, it was completely the opposite. George, Bob, Tom, Roy and Jeff all sat together, wrote and recorded an album in 18 days (with a few overdubs). Such collaboration is rare, let alone among giants. And I’m willing to accept the silliness; these were musicians having fun. Tweeter and the Monkey Man is Bob’s behind-the-back pass, the sax solo on Heading Towards the Light is George’s open-court lob, the sequenced beginning of Margarita is Jeff’s four-feet- behind-the-three-point-line swish. You could assemble an equally impressive team of legends (as was done in 1996, arguably, with The Dream Team 2 and as I’ve tried to do above), but it wouldn’t be of the moment. There was only one Dream Team. There will only ever be one group of Traveling Wilburys.