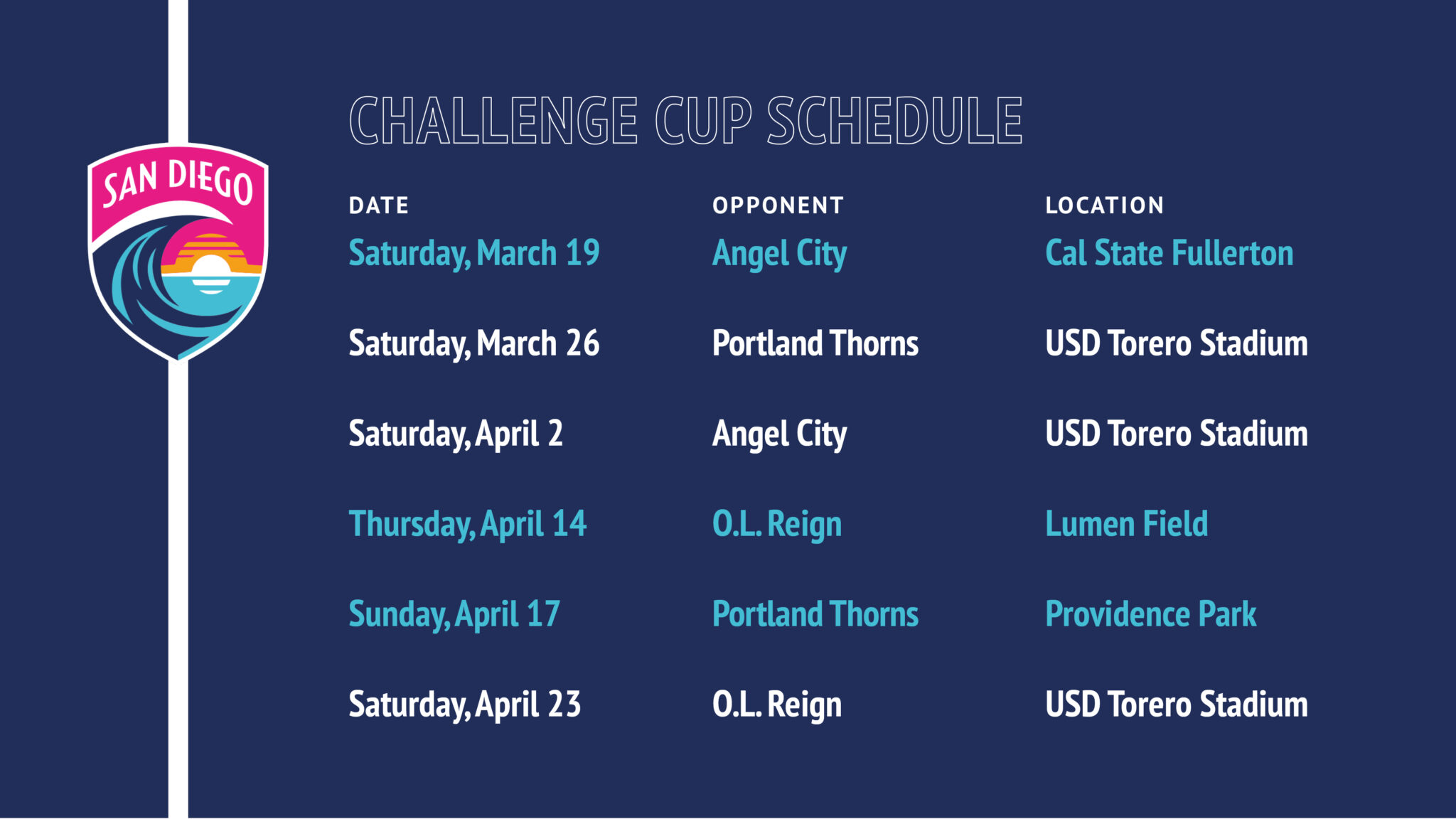 The moment we’ve all been waiting for is nearly upon us! Kicking off at 6 p.m. on Saturday, San Diego Wave FC takes on our rivals from Los Angeles, Angel City FC, in what will be the first ever competitive match for either side. San Diego has waited almost 20 years to watch a top flight team in action, and hope and anticipation is sky high.

And yet, as far as tactics and the footballing side of things go, the club (and manager Casey Stoney) have kept things mostly under wraps (as they should!). Even some of us more tuned-in soccer insiders are coming into this inaugural season a bit unsure of what to expect from the team competitively. So for fans of the club, or new fans of soccer in general, I’m going to give an in-depth preview of the Wave’s upcoming Challenge Cup schedule and break down a couple of possible formations and starting XIs going forward.

• Yesterday the team finalized its full 24-woman roster. That includes:

• The NWSL has announced the full schedule of league games. We will break down the Wave’s schedule in a later column, but for now you can check it out below. Ticket info TBA.

What should we expect from the Wave in 2022?

Predicting an expansion team’s success is sometimes fruitless. Understandably they can take a while to find their identity and hit their stride, so expectations should always be tempered. At the same time, the Wave have a committed ownership group, a tremendously accomplished president of soccer operations in Jill Ellis, a terrific coaching staff led by manager Casey Stoney, and a hugely promising roster of players. In the wake of the allegations of abuse and toxic cultures at a number of clubs, the NWSL offseason saw more roster turnover and management changes than ever; a whopping eight out of the existing ten franchises hired new managers! All things considered, the Wave might actually be on more even ground with how different some clubs look right now. As a brand new club with a totally fresh slate, there’s a real opportunity to establish a winning culture and vision in a city that unequivocally loves the sport. Anything could happen here!

But the Challenge Cup should give us a better idea of what to expect in the regular season. So far, NWSL managers have been pretty vague on their clubs’ expectations for the cup. And as far as domestic cups go, they’re their own fickle contradiction. If you win it all, then it’s a rousing accomplishment, but if you lose, nobody’s too bothered about it. The real prize is the league title, and anything else is a cherry. Some managers may go after it if the opportunity is there, while others might be intent on just letting it be a preseason warm-up exercise. For the Wave, it could be a bit of both. They will definitely compete as hard as they can, but I can also see them using it as an opportunity to develop players, especially some of the younger ones, into an organized system, and for Stoney to finalize her formation and tactics for the regular season.

Whatever their mindset is, the Challenge Cup is going to be exactly that – a challenge. The West group on paper is arguably the strongest, with OL Reign and Portland Thorns finishing atop last season’s standings, and fellow expansion side Angel City clearly looking to aim high as well. Stoney will have a lot to think about tactically. With that in mind, here are a couple of possible formations and starting XIs that she might employ. Based on my own research, these are very rough predictions. Given how diverse of a roster we have, and the fact that so many players can play multiple positions, you will probably see a very fluid formation in which several different players can slot in and out.

While in charge of Manchester United, Stoney very often utilized the 4-2-3-1 formation. It’s a set-up that stresses defensive organization and positional awareness, with strength in a midfield diamond without sacrificing too much width on the wings. Players here have a more prescribed and drilled-in role in the team – a tighter formation that minimizes space for the opponent. Stoney may initially employ this formation in order to bring this group of players – most of whom have never played competitively together before – fully up to speed.

From an attacking standpoint, Alex Morgan is the purest central striker and most obvious choice to lead the line. Sophia Jakobsson can also play up top, though her most natural position throughout her career – especially with the Swedish national team – has been at right wing, which is where I think she’ll mostly play.

There are a number of highly-touted rookies – attacking midfielders Kelsey Turnbow and Marleen Schimmer, and central defender Naomi Girma – who could make their professional debuts on Saturday, but I doubt all of them will start right off the bat. If our attackers are going to drop back in a 4-2-3-1, then I think it’s the perfect chance for Schimmer and Turnbow to shine. Although it’s truly a guess as to which spot either player will occupy. Turnbow is listed as a midfielder in the roster and Schimmer as a forward, so I think it’s possible we’ll see Turnbow in the central no. 10 position while Schimmer plays more advanced and drifts out to the left wing. Of course, veteran forwards like Katie Johnson, Makenzy Doniak and Jodie Taylor will have plenty of opportunities to slot in at centre forward or in these attacking midfield roles as well..

Should this play out, I think it’s safe to say that Taylor Kornieck and Emily van Egmond will drop back into the more defensive and/or box-to-box midfielder roles. Korieck and van Egmond are the most experienced midfielders in the squad and should get the bulk of playing time out the gate.

With Stoney’s emphasis in preseason on defensive solidity, I think the back four will look tightly organized with Abby Dahlkemper to be the rock at centre back. The other defenders on the squad are all capable of playing anywhere along the back line, so a number of players could wind up being her long-term partner there. It could eventually be former Stanford star and the Wave’s #1 overall draft pick Naomi Girma, but we could also see the more experienced Kaleigh Riehl start there initially. Kristen McNabb, meanwhile, is listed on the roster as a midfielder, although during her time at OL Reign she played a good chunk of her games at left back. With her consistency and experience, I think she’s a good bet to take that position in this formation. Meanwhile, Christen Westphal rounds out the back four as the most experienced pure right back on the team, while world-class goalkeeper Kailen Sheriden is a lock to be our no.1 at that position.

This seems to be the most pragmatic approach Stoney could take, and perhaps a good way to ease the squad into a rhythm as the Challenge Cup progresses. Time will tell.

On the other hand, while Stoney has highlighted defensive organization in preseason, she’s also emphasized it as a means to attack better and more frequently. With the team’s wealth of attacking talent, if the Wave can hit the ground running, then I think you could see a more fluid offensive approach in a 4-3-3 and with a slightly different XI.

If done well, a 4-3-3 can yield some breathtaking scoring results. The attacking players are given more space to bomb down the flanks and drift wide, the midfield can offer a high press, and the full backs can make speedy overlapping runs. In this scenario, Morgan retains her spot up top, Jakobsson stays on the right wing, and Schimmer and Turnbow drop to the bench. Here, the more attacking-minded player – Mexican national team forward Katie Johnson – takes the spot on the left wing, and both wingers now have more freedom to drift wider to stretch the defense, or move more fluidly along the front line along with Morgan.

Kornieck and van Egmond stay in midfield but move into more advanced attacking positions, playing a counterattacking style and pouncing on any errors that the opposition makes. A lot of this freewheeling attacking prowess hinges on our ability to balance defensive solidity in midfield, and that’s where McNabb comes in. Although having spent most of her career in defense, she has played in midfield a decent amount and is listed as one on the roster; this makes her the most natural fit to move up into the DM position. If anything goes wrong further up the field, she becomes the first line of defense on the break.

That leaves Riehl to move out to left back while Westphal stays at right back. Dahlkemper remains the beating heart of the central defense, and Naomi Girma makes her debut as her centre back partner. That leaves Sheridan, who stays put in goal.

Of course, all of this could end up being completely wrong! For all I know they could hit us with a 4-1-4-1! But we will find out when it all goes down Saturday at 6 p.m. on Paramount+. As far as I know, that’s the only way to watch it, but hopefully some local channel comes through with coverage in the future. I hope you all come back next week when I recap the game and preview our Torero Stadium home opener on March 26.

Whether it’s at Blue Foot, O’Brien’s, or the comfort of your own couch, GO WAVE!