J. R. Smith Completes the Knick-est Play of the Season 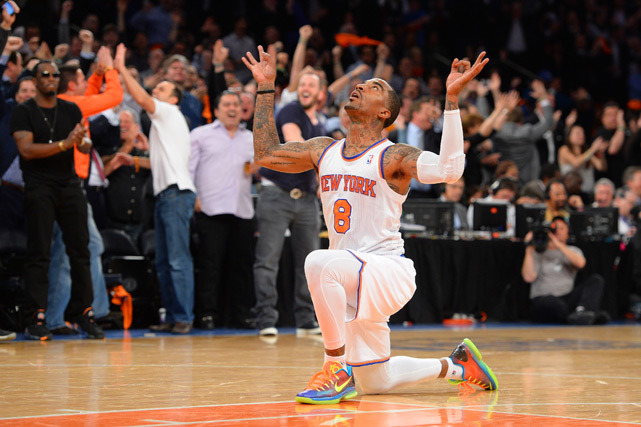 There are plenty of jokes to be made about the Eastern Conference this season. Or, well, the past 15 seasons. And with only three teams above .500 right now, the East has produced more than its share of comical and cringe worthy highlights. The Knicks and the Nets, two teams who, for reasons that probably only extend as far as the fact that they're in a major market, had plenty of title talk at the beginning of the season, have been pillars of disappointment so far and given fans plenty of instant classics.

There was, of course, Jason Kidd's soda spill – a beautiful move of desperation, made possible by a disastruous combination of inflated contracts, underperforming veterans, and a rookie coach. There have been other blunders from the Nets (when you are 12-21 there are definitely other blunders) and they have had plenty of injuries to complain about, but nothing really encapsulates their season of disappointment like a looping video of their coach, soda in hand, mouthing “hit me” again and again.

Not to be outdone by the little brothers across the water, the Knicks have also put their stamp on this season. Amidst a host of ill-advised plays and odd strategies, their calling card has been the “broken controller” defense. We've seen this executed to perfection several times, at least once by Amar'e Stoudemire and a few times by new Knick, Andrea Bargnani.

But as the season goes on, so too does the spectacle of New York basketball. In the midst of a Texas roadtrip, the Knicks were in Dallas last night attempting to execute more than two plays in a row that resembled basketball. Were it possible, it might be enough to not send coach Mike Woodson into another catatonic state with head titled, mouth barely ajar, staring off onto a horizon thinking of better days running the court with Isiah Thomas and being the kings of IU, wondering when in the hell it all went pear-shaped. But, alas, this is the Knicks, and in a tragedy that is far more entertaining than the Nets – whether that's because the Nets are in a new location and forcing an allegiance that isn't there yet or because the entitlement of New Yorkers and their clamoring for a championship that never comes is really cute – they can't even make it through a victory without delivering some foul trickery or mishap.

Just before the end of the first half last night, J. R. Smith was lined up next to Shawn Marion during a set of free throws. It's a moment for players to collect themselves; perhaps reflect on a 3-pointer they shouldn't have taken in the last possession, check their knee braces, test ankle tape, and maybe tuck in a loose jersey. For Smith, it was the perfect moment to untie Marion's shoe. Maybe it's not appropriate, maybe it's a low-class move. But it is pretty funny, and when you're ten games under .500, why the hell not? J. R. is going to J. R. and for that, we salute.